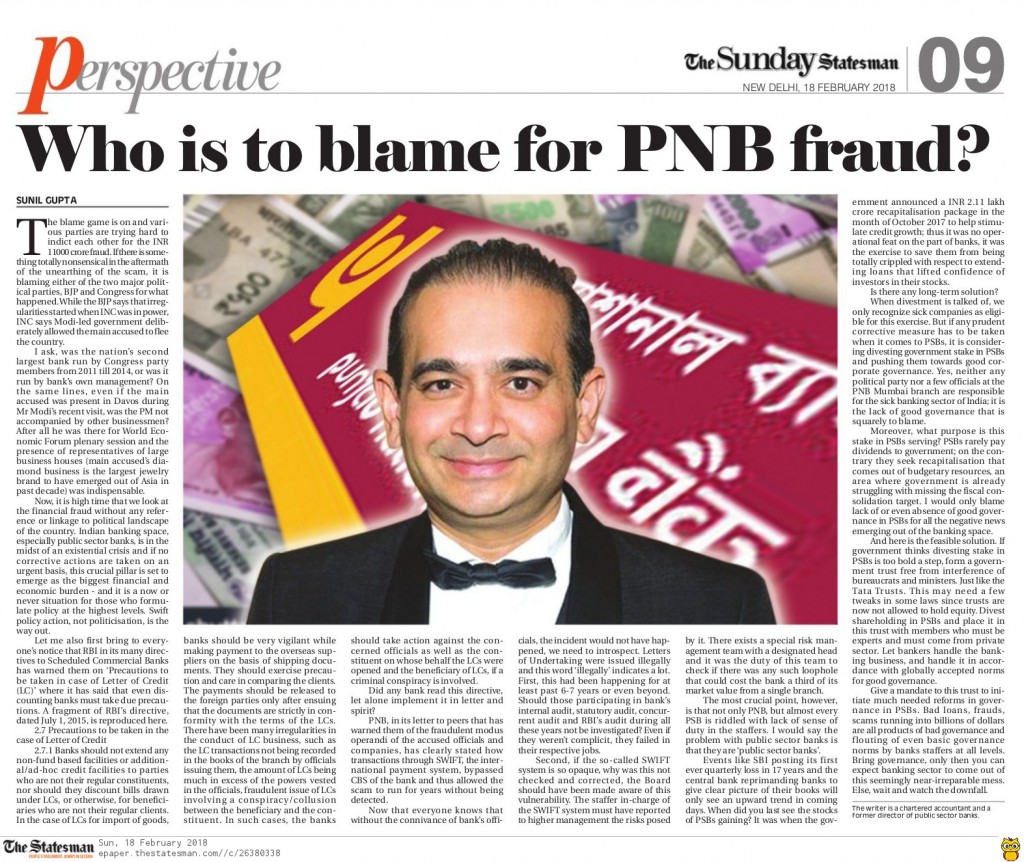 The blame game is on and various parties are trying hard to indict each other for the INR 11000 crore fraud. If there is something totally nonsensical in the aftermath of the unearthing of the scam, it is blaming either of the two major political parties, BJP and Congress for what has happened. While the BJP says that irregularities started when INC was in power, INC says Modi-led government deliberately allowed the main accused to flee the country.

I ask, was the nation’s second largest bank run by Congress party members from 2011 till 2014, or was it run by bank’s own management? On the same lines, even if the main accused was present in Davos during Mr. Modi’s recent visit, was the PM not accompanied by other businessmen? After all he was there for World Economic Forum plenary session and the presence of representatives of largebusiness houses (main accused’s diamond business is the largest jewelry brand to have emerged out of Asia in past decade) was indispensable?

Now, it is high time that we look at the financial fraud without any reference or linkage to political landscape of the country. Indian banking space, especially public sector banks, is in the midst of an existential crises and if no corrective actions are taken on an urgent basis, this crucial pillar is set to emerge as the biggest financial and economic burden – and it is a now or never situation for those who formulate policy at the highest levels. Swift policy action, not politicisation, is the way out.

Let me also first bring to everyone’s notice that RBI in its many directives to Scheduled Commercial Banks has warned them on ‘Precautions to be taken in case of Letter of Credit (LC)’ where it has said that even discounting banks must take due precautions. A fragment of RBI’s directive,dated July 1, 2015,is reproduced here.

2.7 Precautions to be taken in the case of Letter of Credit

2.7.1 Banks should not extend any non-fund based facilities or additional/ad-hoc credit facilities to parties who are not their regular constituents, nor should they discount bills drawn under LCs, or otherwise, for beneficiaries who are not their regular clients. In the case of LCs for import of goods, banks should be very vigilant while making payment to the overseas suppliers on the basis of shipping documents. They should exercise precaution and care in comparing the clients. The payments should be released to the foreign parties only after ensuing that the documents are strictly in conformity with the terms of the LCs. There have been many irregularities in the conduct of LC business, such as the LC transactions not being recorded in the books of the branch by officials issuing them, the amount of LCs being much in excess of the powers vested in the officials, fraudulent issue of LCs involving a conspiracy/collusion between the beneficiary and the constituent. In such cases, the banks should take action against the concerned officials as well as the constituent on whose behalf the LCs were opened and the beneficiary of LCs, if a criminal conspiracy is involved.

Did any bank read this directive, let alone implement it in letter and spirit?

PNB, in its letter to peers that has warned them of the fraudulent modus operandi of the accused officials and companies, has clearly stated how transactions through SWIFT, the international payment system, bypassed CBS of the bank and thus allowed the scam to run for years without being detected.

Now that everyone knows that without the connivance of bank’s officials, the incident would not have happened, we need to introspect. Letter of Undertakings were issued illegally and this word ‘illegally’ indicates a lot. First, this had been happening for at least past 6-7 years or even beyond. Should those participating in bank’s internal audit, statutory audit, concurrent audit and RBI’s audit during all these years not be investigated? Even if they weren’t complicit, they failed in their respective jobs.

Second, if the so-called SWIFT system is so opaque, why was this not checked and corrected, the Board should have been made aware of this vulnerability. The staffer in-charge of the SWIFT system must have reported to higher management the risks posed by it. There exists a special risk management team with a designated head and it was the duty of this team to check if there was any such loophole that could cost the bank a third of its market value from a single branch.

The most crucial point, however, is that not only PNB, but almost every PSB is riddled with lack of sense of duty in the staffers. I would say the problem with public sector banks is that they are ‘public sector banks’.

Events like SBI posting its first ever quarterly loss in 17 years and the central bank reprimanding banks to give clear picture of their books will only see an upward trend in coming days. When did you last see the stocks of PSBs gaining? It was when the government announced a INR 2.11 lakh crore recapitalisation package in the month of October 2017 to help stimulate credit growth; thus it was no operational feat on the part of banks, it was the exercise to save them from being totally crippled with respect to extending loans that lifted confidence of investors in their stocks.

Is there any long-term solution?

When divestment is talked, we only recognize sick companies as eligible for this exercise. But if any prudent corrective measure has to be taken when it comes to PSBs, it is considering divesting government stake in PSBs and pushing them toward good corporate governance. Yes, neither any political party nor a few officials at the PNB Mumbai branch are responsible for the sick banking sector of India; it is the lack of good governance that is squarely blame.

Moreover, what purpose is this stake in PSBs serving? PSBs rarely pay dividends to government; on the contrary they seek recapitalisation that comes out of budgetary resources, an area where government is already struggling with missing the fiscal consolidation target. I would only blame lack of or even absence of good governance in PSBs for all the negative news emerging out of banking space.

And here is thefeasible solution. If government thinks divesting stake in PSBs is too bold a step, form a government trust free from interference of bureaucrats and ministers. Just like Tata Trusts. This may need a few tweaks in some laws since trusts are now not allowed to hold equity. Divest shareholding in PSBs and place it in this trust with members who must be experts and must come from private sector. Let bankers handle the banking business, and handle it in accordance with globally accepted norms for good governance.

Give a mandate to this trust to initiate much needed reforms in governance in PSBs. Bad loans, frauds, scams running into billions of dollars are all products of bad governance and flouting of even basic governance norms by banks staffers at all levels. Bring governance, only then you can expect banking sector to come out of this seemingly near-irreparable mess. Else, wait and watch the downfall.

Who is To Blame For PNB Fraud?

96 thoughts on “Who is To Blame For PNB Fraud?”