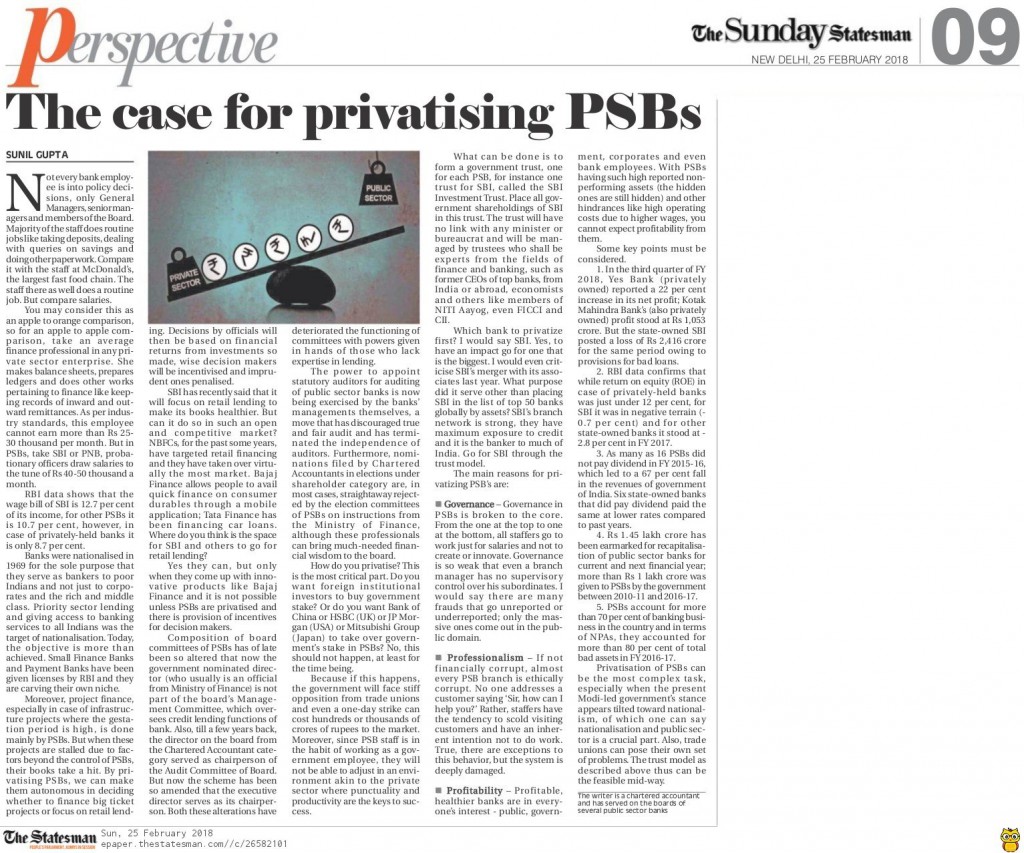 Not every bank employee is into policy decisions, only General Managers, senior managers and members of the Board. Majority of the staff does routine job like taking deposits, dealing with queries on savings and doing other paperwork. Compare it with the staff at McDonald’s, the largest fast food chain. The staff there as well does a routine job. But compare salaries.

You may consider this as an apple to orange comparison, so for an apple to apple comparison, take an average finance professional in any private sector enterprise. She makes balance sheets, prepares ledgers and does other works pertaining to finance like keeping records of inward and outward remittances. As per industry standards, this employee cannot earn more than INR 25-30 thousand per month. But in PSBs, take SBI or PNB, probationary officers draw salaries to the tune of INR 40-50 thousand a month.

RBI data shows that the wage bill of SBI is 12.7 percent of its income, for other PSBs it is 10.7 percent, however, in case of privately-held banks it is only 8.7 percent.

Banks were nationalized in 1969 for the sole purpose that they serve as bankers to poor Indians and not just to corporates and rich and middle class. Priority sector lending and giving access to banking services to all Indians was the target of nationalisation. Today, the objective is more than achieved. Small Finance Banks and Payment Banks have been given licenses by RBI and they are carving their own niche.

Moreover, project finance, especially in case of infrastructure projects where the gestation period is high, is done mainly by PSBs. But when these projects are stalled due to factors beyond the control of PSBs, their books take a hit.By privatising PSBs, we can make them autonomous in deciding whether to finance big ticket projects or focus on retail lending. Decisions by officials will then be based on financial returns from investments so made, wise decision makers will be incentivised and imprudent ones penalised.

SBI has recently said that it will focus on retail lending to make its books healthier. But can it do so in such an open and competitive market? NBFCs, for past some years, have targeted retail financing and they have taken over virtually the most market. Bajaj Finance allows people to avail quick finance on consumer durables through a mobile application; Tata Finance has been financing car loans. Where do you think is the space for SBI and others to go for retail lending?

Yes they can, but only when they come up with innovative products like Bajaj Finance and it is not possible unless PSBs are privatised and there is provision of incentives for decision makers.

Composition of board committees of PSBs has of late been so altered that now the government nominated director (who usually is an official from Ministry of Finance) is not part of board’s Management Committee, which oversees credit lending functions of bank. Also, till a few years back, the director on the board from The Chartered Accountant category served as chairperson of the Audit Committee of Board. But now the scheme has been so amended that the executive director serves as its chairperson. Both these alterations have deteriorated the functioning of committees with powers given in hands of those who lack expertise in lending.

The power to appoint statutory auditors for auditing of public sector banks is now being exercised by the banks’ managements themselves, a move that has discouraged true and fair audit and has terminated the independence of auditors. Furthermore, nominations filed by Chartered Accountants in elections under shareholder category are, in most cases, straightaway rejected by the election committees of PSBs on instructions from the Ministry of Finance; although these professionals can bring much-needed financial wisdom to the board.

How do you privatise?

This is the most critical part. Do you want foreign institutional investors to buy governmentstake? Or do you want Bank of China or HSBC(UK) or JP Morgan (USA) or Mitsubishi Group (Japan) to take over government’s stake in PSBs? No, this should not happen, at least for the time being.

Because if this happens, the government will face stiff opposition from trade unions and even a one-day strike can cost hundreds or thousands of crores of rupees to the market. Moreover, since PSBs staff is in the habit of working as a government employee, they will not be able to adjust in an environment akin to private sector where punctuality and productivity are the keys to success.

What can be done is to form a government trust, one for each PSB for instance one trust for SBI, called the SBI Investment Trust. Place all government shareholding in SBI in this trust. The trust will have no linkwith any minister or bureaucrat and will be managed by trustees who shall be experts from the fields of finance and banking, such as former CEOs of top banks, from India or abroad, economists and others like members of NITI Aayog, even FICCI and CII.

Which bank to privatize first?

I would say SBI. Yes, to have an impact go for one that is the biggest. I would even criticise SBI merger with its associates last year. What purpose did it serve other than placing SBI in the list of top 50 banks globally by assets? SBI’s branch network is strong, they have maximum exposure to credit and it is the banker to much of India. Go for SBI through the trust model.

The main reasons for privatizing PSBs are:

Governance – Governance in PSBs is broken to the core. From the one at the top to one at the bottom, all staffers go to work just for salaries and not to create or innovate. Governance is so weak that even a branch manager has no supervisory control over his subordinates. I would say there are many frauds that go unreported or underreported; only the massive ones come out in the public domain.

Professionalism –If not financially corrupt, almost every PSB branch is ethically corrupt. No one addresses a customer saying ‘Sir, how can I help you?’ Rather, staffers have the tendency to scold visiting customers and have an inherent intention not to do work. True, there are exceptions to this behavior, but the system is deeply damaged.

Profitability – Profitable, healthier banks are in everyone’s interest – public, government, corporates and even bank employees. With PSBs having such high reported non-performing assets (the hidden ones are still hidden) and other hindrances like high operating costs due to higher wages, you cannot expect profitability from them.

Some key points must be considered

1. In the third quarter of FY 2018, Yes Bank (privately owned) reported a 22 percent increase in its net profit; Kotak Mahindra Bank’s (also privately owned) profit stood at Rs.1053 crore. But the state-owned SBI posted a loss of Rs. 2416 crore for the same period owing to provisions for bad loans.

2. RBI data confirms that while return on equity (ROE) in case of privately-held banks was just under 12 percent, for SBI it was in negative terrain (-0.7 percent) and for other state-owned banks it stood at -2.8 percent in FY 2017.

3. As many as 16 PSBs did not pay dividend in FY 2015-16, which led to a 67 percent fall in the revenues of government of India. Six state-owned banks that did pay dividend paid the same at lower rates compared to past years.

4. Rs.1.45 lakh crore has been earmarked for recapitalisation of public sector banksfor current and next financial year; more than Rs. 1 lakh crore was given to PSBs by the government between 2010-11and 2016-17.

5. PSBs account for more than 70 percent of banking business in the country andin terms of NPAs, they accounted for more than80 percentof total bad assets in FY 2016-17.

Privatisation of PSBs can be the most complex task, especially when the present Modi-led government’s stance appears tilted toward nationalism, of which one can say nationalisation and public sector is a crucial part. Also, trade unions can pose their own set of problems. The trust model as described above thus can be the feasible mid-way.

The Case for Privatising PSBs?

73 thoughts on “The Case for Privatising PSBs?”