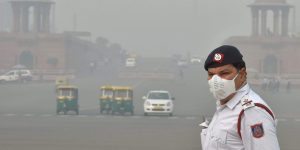 Environmental pollution is not a subject close to the heart of the common man in India. More so is the case with air pollution. The common man is much too preoccupied with the mundane matters of his day-to-day life to become exercised about a larger national issue like air pollution. Time is, however, running out, leaving no more room for complacency. Delhi enjoys the dubious distinction of being the most affected Indian city today. Delhi and the National Capital Region (NCR) are currently gasping for clean air.

People in the affected regions reluctantly wake up on chilly wintry mornings only to be greeted by thick blankets of smog outside the comforts of their home. Their worst fears of the shape of things to come during the course of the day are confirmed by weather reports. Air Quality Index (AQI) keeps plummeting to worrisome levels for days together at a stretch. Commuting between home and the place of work or wherever the tides of life carry the people, becomes an uphill task, with traffic snarls becoming a regular feature of the city life. Flights and train services get delayed and even cancelled on occasions due to smog. Schools are closed for days together.

Corporates allow their employees to work from home on days when AQI is particularly bad. People mill around on the city streets in masks, giving the atmosphere an eerie, surreal look. Social gatherings and public events have been put on hold. Children, senior citizens and those with respiratory problems have been advised by doctors to stay indoors on days when the wind speed slows down, and the cloud cover returns, blocking sunlight and allowing little ventilation, pushing up pollution levels. There is a shopping spree for surgical masks and air purifiers like never before. Oxygen parlours have sprouted on the capital’s skyline to provide relief to the distressed people who are constantly exposed to the polluted air for long periods of time.

Air pollution is here without invitation but not without provocation. It is the direct result of careless and thoughtless actions by people of various segments, with far-reaching consequences on the environment. In any case, the problem shows no signs of going away soon. While statisticians quibble over the distressing figures of AQI and authorities are huddled in meetings to discuss measures to combat the situation, India’s Supreme Court became seized of the matter and asked the government agencies to take urgent steps to address the issue. It also directed the pollution monitoring committee to regularly report to it on the progress made. 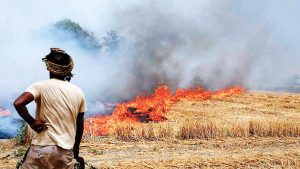 Post-harvest stubble burning by farmers in the neighbouring states is one of the leading causes of air pollution in Delhi. According to a government report, stubble burning has 46% contribution to Delhi’s toxic air as on date. Data released by a study pertaining to the absolute contribution of stubble fires to PM2.5 (Particulate Matter with a diameter of 2.5 microns) concentration in Delhi, is distressing. It is believed that prolonged exposure to high levels of PM2.5 is a big health hazard. Fears have been expressed that it could cause bronchitis and even lead to lung cancer. Shorter exposures are harmful too. This is especially so with young children and the elderly.

Stubble burning has to stop. The neighbouring states of Delhi have to get cracking on this. However, here is a word of caution! Stopping stubble burning could bring down the severity of pollution but not to the desired levels. Moreover, wind speed and direction have their own impact on stubble fires as well as on the air pollution levels. Simply put, pollution levels of Delhi’s air could drastically change depending on the meteorological conditions, regardless of the stopping of the stubble burning or not.

Stubble burning could not be stopped by a governmental decree as such a measure would be perceived as high-handed and unilateral on the part of the government. It would generate avoidable hardship to the farmers and consequent heart burning and frustration. The alternative to stubble burning would be to use stubble cutting machinery, the hiring of which would add to the financial burden on the farmers.

The state governments could encourage the farmers to desist from stubble burning by offering them incentives. This measure is, however, fraught with problem areas in implementation, as has been discovered by the government of Punjab after disbursing over Rs 19 crore! The web portal meant for paying compensation to farmers who own five acres or less, for not burning paddy residue, was found hacked at two locations. In some villages, the number of claimants was more than the number of intended beneficiaries.

Construction activities in Delhi and NCR at a frenetic pace constitute another major cause of the human-made disaster. There is a blanket ban by the Supreme Court on construction and demolition activities in Delhi and NCR. Serious breaches of the apex court’s order have, however, been reported by the pollution monitoring committee, headed by the SC-appointed Environment Pollution (Prevention and Control) Authority, in its report to the court. The committee has also reported instances of hazardous waste being dumped in vacant plots owned by land-owning agencies, lying unguarded and undemarcated.

Such waste is eventually burnt, pushing up pollution levels. The report also mentions that many industrial units are using dirty (unapproved) fuels such as rubber and furnace oil which is banned. According to the report, the authorities have been asked to shut down such units. The Delhi Pollution Control Committee had already sealed 17 industrial units earlier this month for using dirty fuels. The pollution monitoring committee mentioned water sprinkling and other activities by the government agencies to provide relief from pollution, but much more needs to be done.

The report observed that unpaved roads, dumping of hazardous waste and construction debris, as well as large-scale encroachments, were found in several parts of the city. It also referred to the civic bodies in Delhi being asked to gear up as the desired action was found lacking on their part. All these go to prove that there has been some breakthrough in fighting pollution on the instructions of the apex court. However, the progress is inadequate and much more needs to be done to improve the situation on the ground.

The Delhi government had unveiled the odd-even policy for regulating vehicular traffic. Its efficacy in controlling air pollution is highly debatable. What is more, the policy is not uniformly implemented across the board, with exemptions thrown in to exclude some categories of users of vehicles. Nor is it enforced for a sufficiently long period of time to make a difference. Suffice it to say that the impact of the measure on air pollution is woefully inadequate to make a difference.

The need of the hour is for all of the governmental agencies to take concerted action to fight air pollution before the problem gets out of hand. The nation needs a Swachh Hawa programme on the lines of the Swachh Bharat scheme.

84 thoughts on “Is Air Pollution Here to Stay?”