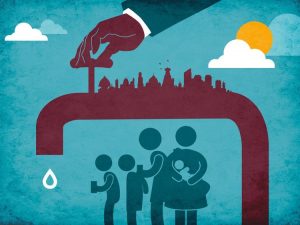 With the solitary exception of air, could there possibly be anything more important than water for the survival of life on planet earth? Is this not the reason why water prospecting always finds a place right at the top in the to-do list of exploratory space missions? With the unnerving prospect of a steady increase in global warming and shrinking of the water resources by the day, the responsibility of man for preserving and sustaining the finite water resources is tremendous.

Rain being the benevolent response of Nature to the crying need of all the living things on earth for water, man is called upon to prudently use, conserve and preserve rainwater by building reservoirs, etc. The moot question is whether mankind is awake to the tremendous responsibility and is prepared to vindicate its obligation not only for its own sake but for the sake of all living things, flora and fauna included. Staring humanity in the face is global warming, which is the primary cause for the shrinking of water resources.

Indiscriminate industrialization, deforestation for human settlement as well as agriculture and other economic and developmental activities, the pillage of natural resources such as minerals, sand quarrying, and illegal mining are among the primary reasons for global warming. Glaciers are melting. Sea levels are rising. Forests are disappearing. Pollution and contamination are taking their toll on water resources. Denudation of forest cover results in sparse and infrequent rainfall.

Famines and droughts are regular features on the climatic calendar in some parts of the world while flash floods regularly devastate some other. India is no exception to this trend. The task at hand, therefore, is not so much as meeting shortfall of water resources as water management. At the macro-level, the government has to think out of the box and implement big-ticket projects while at the micro-level, every individual citizen should apply his shoulder to the wheel by participating in water conservation projects like water harvesting.

The comity of nations is on the quest for a consensus for arresting and reversing the scourge of global warming. Advanced and economically satiated countries have called upon the developing nations to reduce carbon emissions. On its part, India, which is an economic powerhouse in its own right, refuses to be cowed down under pressure.

Laying focus on the requirements of its industrial and economic development, it expects the advanced nations to set an example and lead the other countries by cutting down their own carbon emissions. In short, India will not compromise on its economic development for the cause of containing global warming, which is a global issue to be jointly addressed by all the nations.

Deforestation is an area where there is a vast scope for India to do a lot. There should be zero tolerance towards indiscriminate felling of trees and illegal mining. The State governments and the local populace have to be involved in the joint exercise. Appropriation of a forest area inhabited by a native tribe, for the construction of a dam or some other developmental activity, is fraught with sensitivity as it involves the sentiments of the directly-affected people.

In such cases, NGOs and assorted groups of rights activists jump into the fray and delay the projects with protests and flimsy court cases. The real intentions and motives of these busybodies have to be investigated by the government for appropriate follow-up action. At the same time, the genuine grievances of the native forest-dwellers have, to be taken into consideration by the government while executing the project.

There are water-stressed areas spread across the length and breadth of our country, which receive sparse and infrequent rainfalls. To make matters worse, the groundwater tables are going down in many regions. In many instances, the groundwater becomes contaminated as well. The Union government has done a good deal of groundwork for making drinking water and irrigation facilities available in the water-stressed areas, including in the remote corners of the country. In the development of water distribution systems, farm ponds and water retention structures, the participation of the local populace is involved.

Application of modern scientific farming practices like the usage of remote sensing images, soil samples and hydrological information, complemented by strong community involvement, has helped agriculture in many poor rainfed parts of the country. In this exercise, the cooperation of external agencies like the World Bank has been roped in. India’s friendly relations with Israel have benefited the farming sector with the drip irrigation system. Another likely breakthrough in the area of distribution of drinking water is the innovative desalination of seawater.

After exhausting the traditional water conservation methods and modern technological alternatives, India is still left wanting more to upgrade its water management capability. The current scenario where stretches of agricultural land remain parched while much of the river water flows into the sea is no more tenable. After a great deal of engagement of the issue, experts have come up with an ambitious proposal to inter-link river waters.

There would be three grids in all: one connecting the rivers flowing from the Himalayas with the thawing and melting of glaciers; second, the Southern peninsula segment; and third, the intra-state segment of inter-linked rivers. The proposal is quite massive in scope and scale. It is obviously not something which could be conjured up overnight. Nor is the expenditure likely to be pretentiously modest.

A lot of planning and coordination between multifarious agencies as well as gruelling execution by man and machine would be called for. The expenditure and time taken for implementation of the project would be on an astounding scale, unmatched by any developmental project of the past. More daunting than the expenditure, the time taken and sheer size of the project would be the political factor. A broad consensus for the project between the States through which the rivers pass would have to be arrived at.

This indeed would be the huge task ahead. Considering the acrimonious political equations prevailing among the stakeholders – different political parties – a unified central command would be essential for the project to take off. Looking at today’s ground reality, only a BJP government is capable of providing an encouraging nationwide climate.

Anything less than a favourable political climate would hamper the ambitious project and reduce it to a distant dream. The likely advantages and benefits of the project are enormous. Our country would no more be hopelessly dependent on the monsoon rains. The rivers would connect practically all the States and make irrigation of the farmlands a viable reality.

Farming would no more be a non-profitable source of revenue. Nor would there be a shortage of drinking water. The process of conception and execution of the project would open up tremendous employment opportunities, what with the best of the engineering talent and technical and manual workforce having to be hired. The project spells a win-win situation for India in the realm of water management and farming.

93 thoughts on “Water Management – A Huge Task Ahead”