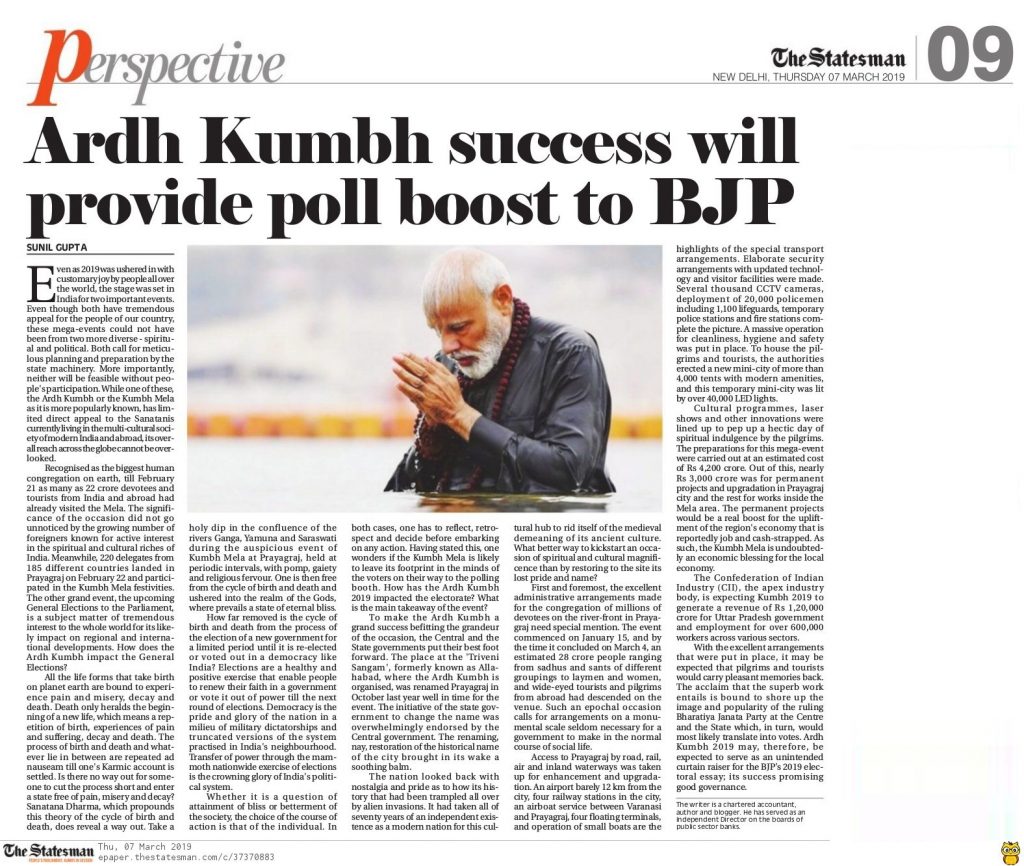 Even as 2019 was ushered in with customary joy by people all over the world, the stage was set in India for two important events. Even though both have tremendous appeal for the people of our country, these mega-events could not have been from two more diverse – spiritual and political. Both call for meticulous planning and preparation by the state machinery. More importantly, neither will be feasible without people’s participation.While one of these, the ArdhKumbh or the KumbhMela as it is more popularly known, has limited direct appeal to the Sanatanis currently living in the multicultural society of modern India and abroad, its overall reach across the globe cannot be overlooked.

Recognised as the biggest human congregation on earth, till February 21 as many as 22 crore devotees and tourists from India and abroad had already visited the Mela. The significance of the occasion did not go unnoticed by the growing number of foreigners known for active interest in the spiritual and cultural riches of India. Meanwhile, 220 delegates from 185 different countries landed in Prayagraj on February 22 and participated in the KumbhMela festivities. The other grand event, the upcoming General Elections to the Parliament, is a subject matter of tremendous interest to the whole world for its likely impact on regional and international developments. How does the ArdhKumbh impact the General Elections?

All the life forms that take birth on planet earth are bound to experience pain and misery, decay and death. Death only heralds the beginning of a new life, which means a repetition of birth, experiences of pain and suffering, decay and death. The process of birth and death and what- ever lie in between are repeated ad nauseam till one’s Karmic account is settled. Is there no way out for some- one to cut the process short and enter a state free of pain, misery and decay? Sanatana Dharma, which propounds this theory of the cycle of birth and death, does reveal a way out. Take a holy dip in the confluence of the rivers Ganga, Yamuna and Saraswati during the auspicious event of KumbhMela at Prayagraj, held at periodic intervals, with pomp, gaiety and religious fervour. One is then free from the cycle of birth and death and ushered into the realm of the Gods, where prevails a state of eternal bliss.

How far removed is the cycle of birth and death from the process of the election of a new government for a limited period until it is re-elected or voted out in a democracy like India? Elections are ahealthy and positive exercise that enable people to renew their faith in a government or vote it out of power till the next round of elections. Democracy is the pride and glory of the nation in a milieu of military dictatorships and truncated versions of the system practised in India’s neighbourhood. Transfer of power through the mam- moth nationwide exercise of elections is the crowning glory of India’s political system.

Whether it is a question of attainment of bliss or betterment of the society, the choice of the course of action is that of the individual. In both cases, one has to reflect, retrospect and decide before embarking on any action. Having stated this, one wonders if the KumbhMela is likely to leave its footprint in the minds of the voters on their way to the polling booth. How has the ArdhKumbh 2019 impacted the electorate? What is the main takeaway of the event?

To make the ArdhKumbh a grand success befitting the grandeur of the occasion, the Central and the State governments put their best foot forward. The place at the ‘TriveniSangam’, formerly known as Allahabad, where the ArdhKumbh is organised, was renamed Prayagraj in October last year well in time for the event. The initiative of the state government to change the name was overwhelmingly endorsed by the Central government. The renaming, nay, restoration of the historical name of the city brought in its wake a soothing balm.

The nation looked back with nostalgia and pride as to how its his- tory that had been trampled all over by alien invasions. It had taken all of seventy years of an independent existence as a modern nation for this cultural hub to rid itself of the medieval demeaning of its ancient culture. What better way to kickstart an occasion of spiritual and cultural magnificence than by restoring to the site its lost pride and name?

First and foremost, the excellent administrative arrangements made for the congregation of millions of devotees on the river-front in Prayagraj need special mention. The event commenced on January 15, and by the time it concluded on March 4, an estimated 28 crore people ranging from sadhus and sants of different groupings to laymen and women, and wide-eyed tourists and pilgrims from abroad had descended on the venue. Such an epochal occasion calls for arrangements on a monumental scale seldom necessary for a government to make in the normal course of social life.

Access to Prayagraj by road, rail, air and inland waterways was taken up for enhancement and upgradation. An airport barely 12 km from the city, four railway stations in the city, an airboat service between Varanasi and Prayagraj, four floating terminals, and operation of small boats are the highlights of the special transport arrangements. Elaborate security arrangements with updated technology and visitor facilities were made. Several thousand CCTV cameras, deployment of 20,000 policemen including 1,100 lifeguards, temporary police stations and fire stations complete the picture. A massive operation for cleanliness, hygiene and safety was put in place. To house the pilgrims and tourists, the authorities erected a new mini-city of more than 4,000 tents with modern amenities, and this temporary mini-city was lit by over 40,000 LED lights.

Cultural programmes, laser shows and other innovations were lined up to pep up a hectic day of spiritual indulgence by the pilgrims. The preparations for this mega-event were carried out at an estimated cost of Rs 4,200 crore. Out of this, nearly Rs 3,000 crore was for permanent projects and upgradation in Prayagraj city and the rest for works inside the Mela area. The permanent projects would be a real boost for the up liftment of the region’s economy that is reportedly job and cash-strapped. As such, the KumbhMela is undoubtedly an economic blessing for the local economy.

The Confederation of Indian Industry (CII), the apex industry body, is expecting Kumbh 2019 to generate a revenue of Rs 1,20,000 crore for Uttar Pradesh government and employment for over 600,000 workers across various sectors.

With the excellent arrangements that were put in place, it may be expected that pilgrims and tourists would carry pleasant memories back. The acclaim that the superb work entails is bound to shore up the image and popularity of the ruling BharatiyaJanata Party at the Centre and the State which, in turn, would most likely translate into votes. ArdhKumbh 2019 may, therefore, be expected to serve as an unintended curtain raiser for the BJP’s 2019 electoral essay; its success promising good governance.