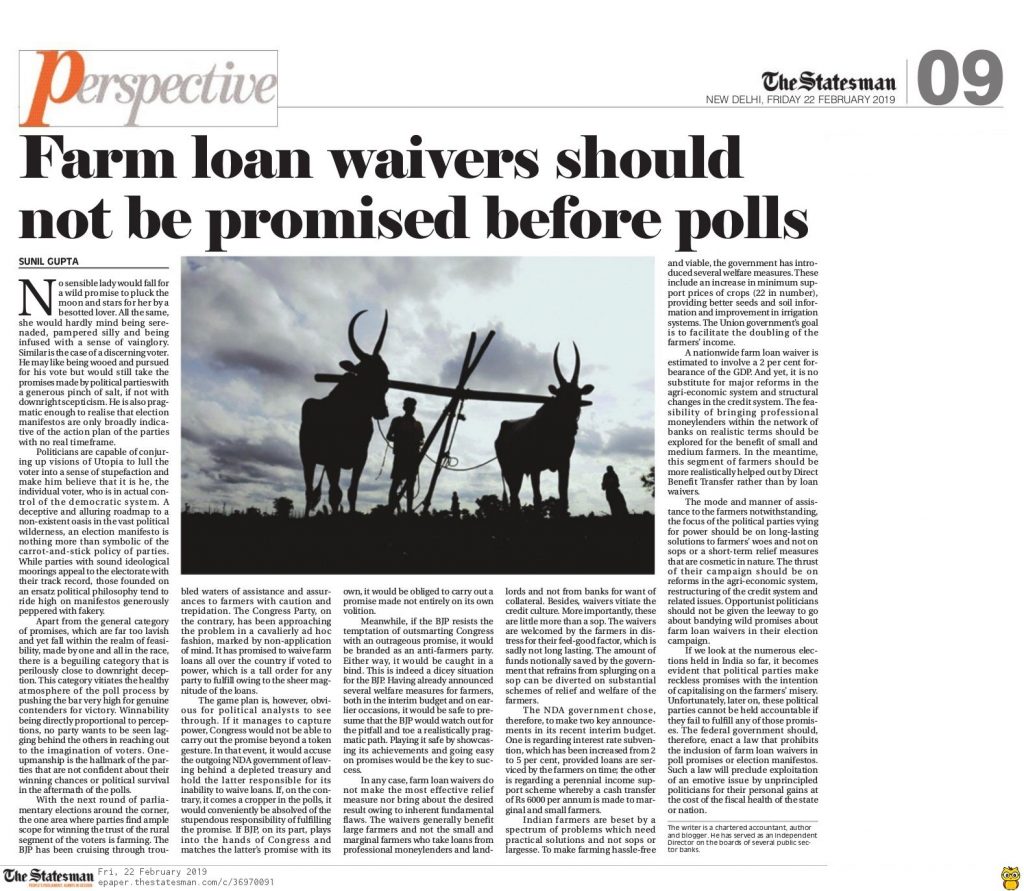 No sensible lady would fall for a wild promise to pluck the moon and stars for her by a besotted lover. All the same, she would hardly mind being serenaded, pampered silly and being infused with a sense of vainglory. Similar is the case of a discerning voter. He may like being wooed and pursued for his vote but would still take the promises made by political parties with a generous pinch of salt, if not with downright scepticism. He is also pragmatic enough to realise that election manifestos are only broadly indicative of the action plan of the parties with no real timeframe.

Politicians are capable of conjuring up visions of Utopia to lull the voter into a sense of stupefaction and make him believe that it is he, the individual voter, who is in actual control of the democratic system. A deceptive and alluring roadmap to a non-existent oasis in the vast political wilderness, an election manifesto is nothing more than symbolic of the carrot-and-stick policy of parties. While parties with sound ideological moorings appeal to the electorate with their track record, those founded on an ersatz political philosophy tend to ride high on manifestos generously peppered with fakery.

Apart from the general category of promises, which are far too lavish and yet fall within the realm of feasibility, made by one and all in the race, there is a beguiling category that is perilously close to downright deception. This category vitiates the healthy atmosphere of the poll process by pushing the bar very high for genuine contenders for victory. Winnability being directly proportional to perceptions, no party wants to be seen lagging behind the others in reaching out to the imagination of voters. One-upmanship is the hallmark of the par- ties that are not confident about their winning chances or political survival in the aftermath of the polls.

With the next round of parliamentary elections around the corner, the one area where parties find ample scope for winning the trust of the rural segment of the voters is farming. The BJP has been cruising through troubled waters of assistance and assurances to farmers with caution and trepidation. The Congress Party, on the contrary, has been approaching the problem in a cavalierly ad hoc fashion, marked by non-application of mind. It has promised to waive farm loans all over the country if voted to power, which is a tall order for any party to fulfill owing to the sheer magnitude of the loans.

The game plan is, however, obvious for political analysts to see through. If it manages to capture power, Congress would not be able to carry out the promise beyond a token gesture. In that event, it would accuse the outgoing NDA government of leaving behind a depleted treasury and hold the latter responsible for its inability to waive loans. If, on the contrary, it comes a cropper in the polls, it would conveniently be absolved of the stupendous responsibility of fulfilling the promise. If BJP, on its part, plays into the hands of Congress and matches the latter’s promise with its own, it would be obliged to carry out a promise made not entirely on its own volition.

Meanwhile, if the BJP resists the temptation of outsmarting Congress with an outrageous promise, it would be branded as an anti-farmers party. Either way, it would be caught in a bind. This is indeed a dicey situation for the BJP. Having already announced several welfare measures for farmers, both in the interim budget and on earlier occasions, it would be safe to presume that the BJP would watch out for the pitfall and toe a realistically pragmatic path. Playing it safe by showcasing its achievements and going easy on promises would be the key to success.

In any case, farm loan waivers do not make the most effective relief measure nor bring about the desired result owing to inherent fundamental flaws. The waivers generally benefit large farmers and not the small and marginal farmers who take loans from professional moneylenders and land-lords and not from banks for want of collateral. Besides, waivers vitiate the credit culture. More importantly, these are little more than a sop. The waivers are welcomed by the farmers in distress for their feel-good factor, which is sadly not long lasting. The amount of funds notionally saved by the government that refrains from splurging on a sop can be diverted on substantial schemes of relief and welfare of the farmers.

The NDA government chose, therefore, to make two key announcements in its recent interim budget. One is regarding interest rate subvention, which has been increased from 2 to 5 per cent, provided loans are serviced by the farmers on time; the other is regarding a perennial income sup- port scheme whereby a cash transfer of Rs 6000 per annum is made to marginal and small farmers.

Indian farmers are beset by a spectrum of problems which need practical solutions and not sops or largesse. To make farming hassle-free and viable, the government has introduced several welfare measures. These include an increase in minimum sup- port prices of crops (22 in number), providing better seeds and soil information and improvement in irrigation systems. The Union government’s goal is to facilitate the doubling of the farmers’ income.

A nationwide farm loan waiver is estimated to involve a 2 per cent forbearance of the GDP. And yet, it is no substitute for major reforms in the agri-economic system and structural changes in the credit system. The feasibility of bringing professional moneylenders within the network of banks on realistic terms should be explored for the benefit of small and medium farmers. In the meantime, this segment of farmers should be more realistically helped out by Direct Benefit Transfer rather than by loan waivers.

The mode and manner of assistance to the farmers notwithstanding, the focus of the political parties vying for power should be on long-lasting solutions to farmers’ woes and not on sops or a short-term relief measures that are cosmetic in nature. The thrust of their campaign should be on reforms in the agri-economic system, restructuring of the credit system and related issues. Opportunist politicians should not be given the leeway to go about bandying wild promises about farm loan waivers in their election campaign.

If we look at the numerous elections held in India so far, it becomes evident that political parties make reckless promises with the intention of capitalising on the farmers’ misery. Unfortunately, later on, these political parties cannot be held accountable if they fail to fulfill any of those promises. The federal government should, therefore, enact a law that prohibits the inclusion of farm loan waivers in poll promises or election manifestos. Such a law will preclude exploitation of an emotive issue by unprincipled politicians for their personal gains at the cost of the fiscal health of the state or nation.