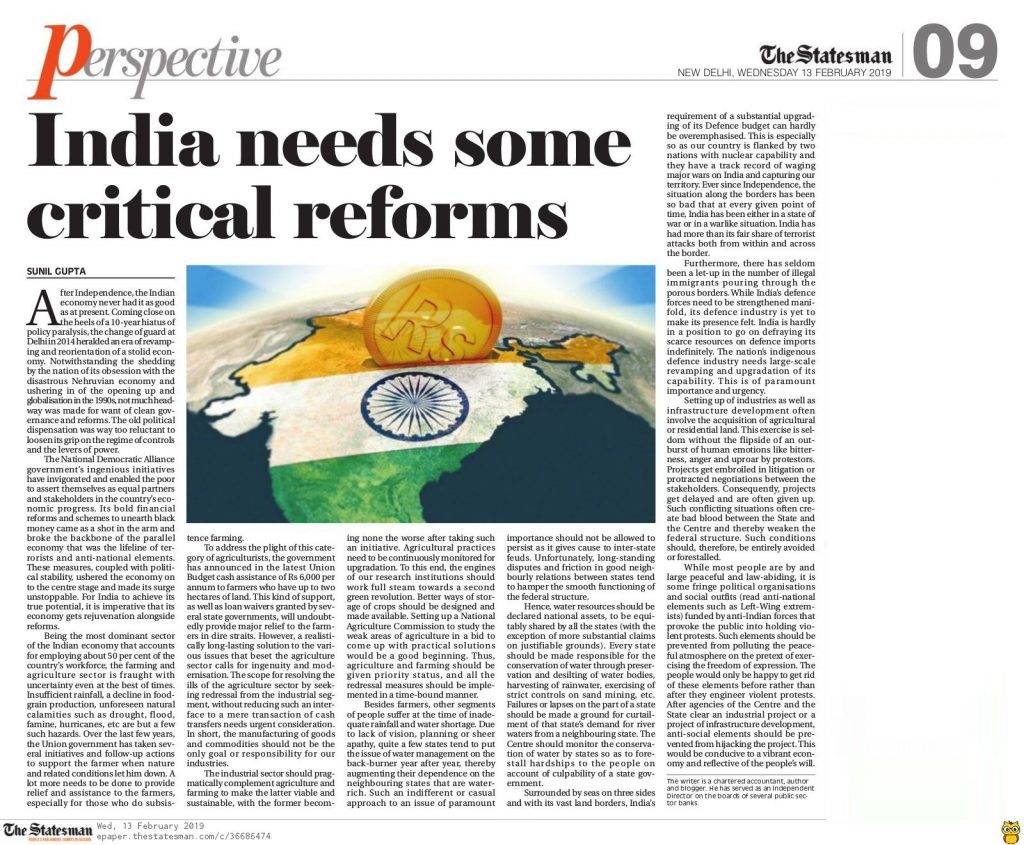 After Independence, the Indian economy never had it as good as at present. Coming close on the heels of a 10-year hiatus of policy paralysis, the change of guard at Delhi in 2014 heralded an era of revamping and reorientation of a stolid economy. Notwithstanding the shedding by the nation of its obsession with the disastrous Nehruvian economy and ushering in of the opening up and globalisationinthe1990s, not much headway was made for want of clean governance and reforms. The old political dispensation was way too reluctant to loosen its grip on the regime of controls and the levers of power.

The National Democratic Alliance government’s ingenious initiatives have invigorated and enabled the poor to assert themselves as equal partners and stakeholders in the country’s economic progress. Its bold financial reforms and schemes to unearth black money came as a shot in the arm and broke the backbone of the parallel economy that was the lifeline of terrorists and anti-national elements. These measures, coupled with political stability, ushered the economy on to the centre stage and made its surge unstoppable. For India to achieve its true potential, it is imperative that its economy gets rejuvenation alongside reforms.

Being the most dominant sector of the Indian economy that accounts for employing about 50 per cent of the country’s workforce, the farming and agriculture sector is fraught with uncertainty even at the best of times. Insufficient rainfall, a decline in food- grain production, unforeseen natural calamities such as drought, flood, famine, hurricanes, etc are but a few such hazards. Over the last few years, the Union government has taken several initiatives and follow-up actions to support the farmer when nature and related conditions let him down. A lot more needs to be done to provide relief and assistance to the farmers, especially for those who do subsistence farming.

To address the plight of this category of agriculturists, the government has announced in the latest Union Budget cash assistance of Rs 6,000 per annum to farmers who have up to two hectares of land. This kind of support, as well as loan waivers granted by several state governments, will undoubtedly provide major relief to the farmers in dire straits. However, a realistically long-lasting solution to the various issues that beset the agriculture sector calls for ingenuity and modernisation. The scope for resolving the ills of the agriculture sector by seeking redressal from the industrial segment, without reducing such an interface to a mere transaction of cash transfers needs urgent consideration. In short, the manufacturing of goods and commodities should not be the only goal or responsibility for our industries.

The industrial sector should pragmatically complement agriculture and farming to make the latter viable and sustainable, with the former becoming none the worse after taking such an initiative. Agricultural practices need to be continuously monitored for upgradation. To this end, the engines of our research institutions should work full steam towards a second green revolution. Better ways of storage of crops should be designed and made available. Setting up a National Agriculture Commission to study the weak areas of agriculture in a bid to come up with practical solutions would be a good beginning. Thus, agriculture and farming should be given priority status, and all the redressal measures should be implemented in a time-bound manner.

Besides farmers, other segments of people suffer at the time of inadequate rainfall and water shortage. Due to lack of vision, planning or sheer apathy, quite a few states tend to put the issue of water management on the back-burner year after year, thereby augmenting their dependence on the neighbouring states that are water- rich. Such an indifferent or casual approach to an issue of paramount imortance should not be allowed to persist as it gives cause to inter-state feuds. Unfortunately, long-standing disputes and friction in good neighbourly relations between states tend to hamper the smooth functioning of the federal structure.

Hence, water resources should be declared national assets, to be equitably shared by all the states (with the exception of more substantial claims on justifiable grounds). Every state should be made responsible for the conservation of water through preservation and desilting of water bodies, harvesting of rainwater, exercising of strict controls on sand mining, etc. Failures or lapses on the part of a state should be made a ground for curtailment of that state’s demand for river waters from a neighbouring state. The Centre should monitor the conservation of water by states so as to fore- stall hardships to the people on account of culpability of a state government.

Surrounded by seas on three sides and with its vast land borders, India’s requirement of a substantial upgrading of its Defence budget can hardly be overemphasised. This is especially so as our country is flanked by two nations with nuclear capability and they have a track record of waging major wars on India and capturing our territory. Ever since Independence, the situation along the borders has been so bad that at every given point of time, India has been either in a state of war or in a warlike situation. India has had more than its fair share of terrorist attacks both from within and across the border.

Furthermore, there has seldom been a let-up in the number of illegal immigrants pouring through the porous borders. While India’s defence forces need to be strengthened manifold, its defence industry is yet to make its presence felt. India is hardly in a position to go on defraying its scarce resources on defence imports indefinitely. The nation’s indigenous defence industry needs large-scale revamping and upgradation of its capability. This is of paramount importance and urgency.

Setting up of industries as well as infrastructure development often involve the acquisition of agricultural or residential land. This exercise is seldom without the flipside of an out- burst of human emotions like bitterness, anger and uproar by protestors. Projects get embroiled in litigation or protracted negotiations between the stakeholders. Consequently, projects get delayed and are often given up. Such conflicting situations often create bad blood between the State and the Centre and thereby weaken the federal structure. Such conditions should, therefore, be entirely avoided or forestalled.

While most people are by and large peaceful and law-abiding, it is some fringe political organisations and social outfits (read anti-national elements such as Left-Wing extremists) funded by anti-Indian forces that provoke the public into holding violent protests. Such elements should be prevented from polluting the peaceful atmosphere on the pretext of exercising the freedom of expression. The people would only be happy to get rid of these elements before rather than after they engineer violent protests. After agencies of the Centre and the State clear an industrial project or a project of infrastructure development, anti-social elements should be pre- vented from hijacking the project. This would be conducive to a vibrant economy and reflective of the people’s will.