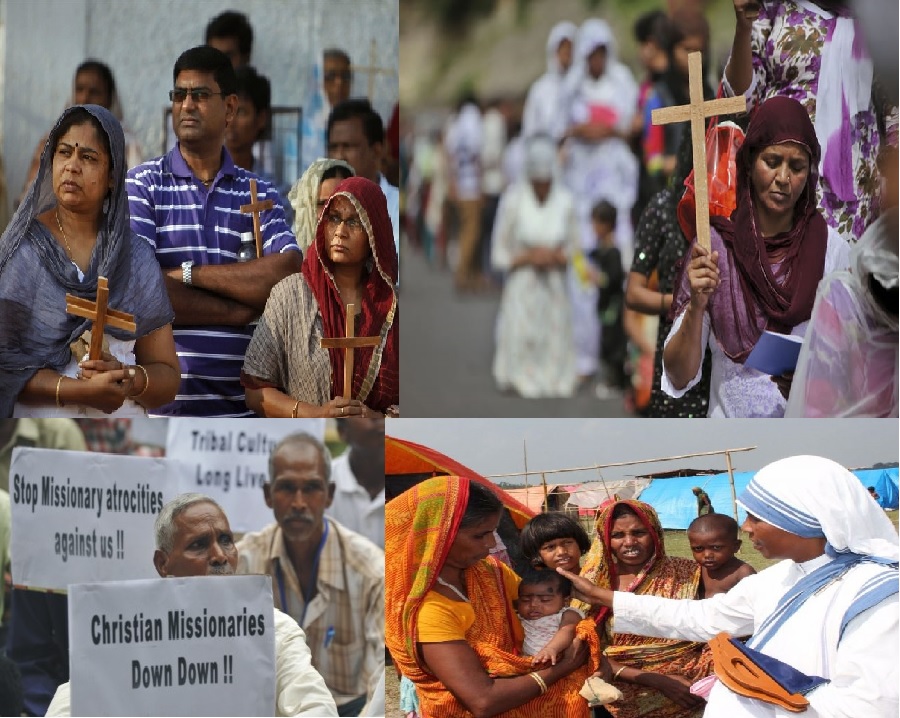 A bane, a curse, a demeaning exercise, a social evil – that is what proselytisation is all about. It is a reprehensible tool acquired by a section of mankind, and it has spilt much more blood in the name of religion than in the name of war. Being subscribers to the credo of “My God is superior to yours,” religious bigots are merchants of hatred, responsible for creating a schism in the doctrine of universal brotherhood and communal harmony. Proselytisers are their agents and foot soldiers. Where the alien invaders and colonisers failed, the foot soldiers strive hard to succeed with the help of their new-found tool. Their modus operandi – brainwash and put people into a religious straightjacket, and cut them down to size to fit a set of rigid religious beliefs.

The medieval Islamic invaders and Christian colonisers brought upon India the scourge of 1,000-year old slavery and religious persecution. They derided the ancient religions of India as blasphemous and berated their practitioners as barbarians and sinners that worshipped dark evil forces. They have been convinced that converting the ‘non-believers’ and ‘idolators’ to their faith is their religious obligation. Successive generations of the bigots of the medieval ages gradually revised their strategy and replaced the sword with deceit and allurements. The process of conversion starts with an over-the-transom counselling by religious mountebanks and evangelists who make it their business to tell the peaceful people how the latter’s religion makes them uncouth savages. The holier-than-thou attitude of the proselytisers and the horrid berating of the indigenous religious beliefs as barbaric practices tend to cause irreparable damage to the social fabric.

Gullible sections of the people are misled into believing that their rich cultural heritage is but a heap of a worthless and shameful burden of the past. They are further brainwashed into thinking that their past history of slavery and subjugation was a direct result of their ‘sinful’ beliefs and practices. Victories after victories by the invaders and colonisers in their military campaigns against India were attributed to their divine right to rule over the ‘infidels’ and ‘pagans’. Bereft of self-esteem and shorn of pride in their cultural legacy, the ill-informed and misinformed sections of Indians are talked into trading diamonds for glass beads and shells. Eventually, these people shift focus from the goal of attaining spiritual bliss to acquiring material comforts, often passed off as an adjunct to an alternative faith or a rigid religious system enforced at the cost of liberty or life.

Travesty of Tolerance and Unity

In a nation that is committed to re-asserting its traditionally historical role in the comity of nations as Viswa Guru, proselytisation is a travesty of religious tolerance and unity in diversity. It simply has no place in a country where people have been taking pride in the doctrine of ‘Vasudhaiva Kutumbakam’. On the contrary, the implanted faiths are hell-bent upon bringing the whole world under the central command of their respective religious authority. Flush with illegally-sourced funds from vested interests abroad, proselytisers find a soft target in the poor gullible people, whom they convert with cash inducements, tempting allurements and false promises. They have no compunction about spreading canards such as casteism being an evil creation of Hinduism. Converted people are often led to believe that the votaries of the two Abrahamic faiths in India do not practise casteism. By the time the converts discover the truth, they realise that it is too late to undo the mistake they have committed.

The proselytisers also find pliable colluders amongst the disgruntled members of the intelligentsia, academics and artists with a cock-eyed vision of history or misplaced loyalty to an alien political ideology at odds with India’s cultural ethos. These elements provide the much-wanted support system to the proselytiser to sway the far too young and ideologically infirm among the society, who are susceptible to the crosscurrents of the pseudo-secular ideology or nihilism. Another segment of the society that allows itself to play into the hands of the proselytiser is the paid sections of the mainstream media (MSM). This segment is too happy to promote disharmony and restlessness in society by questioning the relevance of traditional religious beliefs in a world of changing priorities. The possibility of the seemingly innocuous activities of these elements doubling up as a front to the covert operations of the anti-national elements and divisive forces cannot be ruled out.

Proselytisation is evidently a non-democratic dogma, which needs to be put down by the State with a heavy hand. Else, the very fabric of communal harmony and the territorial integrity of the nation would be at peril. A morally reprehensible phenomenon of a bygone era, marked by witchcraft and sorcery, proselytisation is ethically and politically untenable in today’s age of freedom of thought and religious practice. Clear lines of segregation of religious propagation and proselytisation have been drawn in every modern society for the benefit of its peace-loving people. In India, where people are free not only to practise a religion of their choice but also to propagate their faith without the fear of persecution, freedom of religion is enshrined as a fundamental right in the Constitution. This freedom is subject to public order, morality and future wellbeing of our nation.

Need for a National Law

So far, there has been no national law enacted against the evil practice of proselytisation by the Union Government as the subject falls purely under the Constitutional domain of the states under the State List in the Seventh Schedule of the Indian Constitution. Even among the states, legislations have been enacted by only eight of them, to regulate religious conversions carried out by force, fraud, or other inducements. The absence of a nation-wide anti-conversion law and the failure of most of the states to enact laws that prohibit conversions which are not absolutely voluntary, is a matter for serious reflection by all the right-thinking people. If the current state of affairs is allowed to continue any longer, serious demographic changes are bound to occur, particularly in India’s bordering states.

With people of the minority communities tending to live in clusters, the precipitation of more and more such clusters would make them increasingly isolated and alienated from the national mainstream. The apprehension of the majority community of being outnumbered some day in the future by the swelling numbers of the members of the minority communities cannot be ruled out either. Such a situation would likely jeopardise the doctrine of Secularism and pose a threat to our nation’s territorial integrity. India has already gone through a partition and too many wars to let its guard down. Furthermore, the dangers of Proxy Wars, Terrorism and Naxalism call for the downshifting of gears in the country’s security preparedness. Worrisome demographic changes and another partition are threats that India cannot afford to face anymore. Hence, it is high time that a national law banning religious conversions, which are not entirely voluntary, is passed by the government in the interest of our country’s survival.

81 thoughts on “India Should Pass a National Law Against Proselytisation”