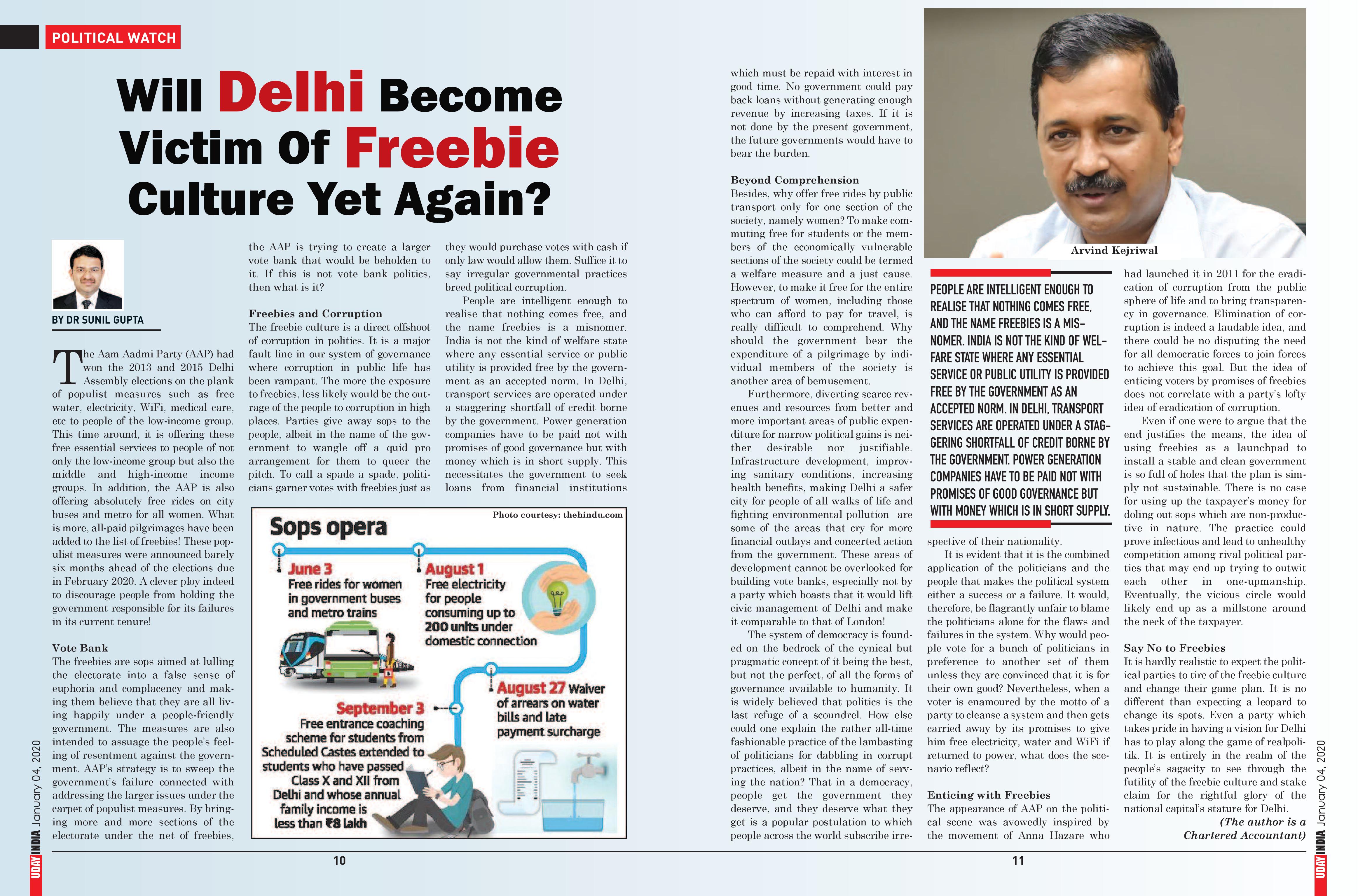 The Aam Aadmi Party (AAP) had won the 2013 and 2015 Delhi Assembly elections on the plank of populist measures such as free water, electricity, WiFi, medical care, etc to people of the low-income group. This time around, it is offering these free essential services to people of not only the low-income group but also the middle and high-income income groups. In addition, the AAP is also offering absolutely free rides on city buses and metro for all women. What is more, all-paid pilgrimages have been added to the list of freebies! These populist measures were announced barely six months ahead of the elections due in February 2020. A clever ploy indeed to discourage people from holding the government responsible for its failures in its current tenure!

The freebies are sops aimed at lulling the electorate into a false sense of euphoria and complacency and making them believe that they are all living happily under a people-friendly government. The measures are also intended to assuage the people’s feeling of resentment against the government. AAP’s strategy is to sweep the government’s failure connected with addressing the larger issues under the carpet of populist measures. By bringing more and more sections of the electorate under the net of freebies, the AAP is trying to create a larger vote bank that would be beholden to it. If this is not vote bank politics, then what is it?

The freebie culture is a direct offshoot of corruption in politics. It is a major fault line in our system of governance where corruption in public life has been rampant. The more the exposure to freebies, less likely would be the outrage of the people to corruption in high places. Parties give away sops to the people, albeit in the name of the government to wangle off a quid pro arrangement for them to queer the pitch. To call a spade a spade, politicians garner votes with freebies just as they would purchase votes with cash if only law would allow them. Suffice it to say irregular governmental practices breed political corruption.

People are intelligent enough to realise that nothing comes free, and the name freebies is a misnomer. India is not the kind of welfare state where any essential service or public utility is provided free by the government as an accepted norm. In Delhi, transport services are operated under a staggering shortfall of credit borne by the government. Power generation companies have to be paid not with promises of good governance but with money which is in short supply. This necessitates the government to seek loans from financial institutions which must be repaid with interest in good time. No government could pay back loans without generating enough revenue by increasing taxes. If it is not done by the present government, the future governments would have to bear the burden.

Besides, why offer free rides by public transport only for one section of the society, namely women? To make commuting free for students or the members of the economically vulnerable sections of the society could be termed a welfare measure and a just cause. However, to make it free for the entire spectrum of women, including those who can afford to pay for travel, is really difficult to comprehend. Why should the government bear the expenditure of a pilgrimage by individual members of the society is another area of bemusement.

Furthermore, diverting scarce revenues and resources from better and more important areas of public expenditure for narrow political gains is neither desirable nor justifiable. Infrastructure development, improving sanitary conditions, increasing health benefits, making Delhi a safer city for people of all walks of life and fighting environmental pollution  are some of the areas that cry for more financial outlays and concerted action from the government. These areas of development cannot be overlooked for building vote banks, especially not by a party which boasts that it would lift civic management of Delhi and make it comparable to that of London!

The system of democracy is founded on the bedrock of the cynical but pragmatic concept of it being the best, but not the perfect, of all the forms of governance available to humanity. It is widely believed that politics is the last refuge of a scoundrel. How else could one explain the rather all-time fashionable practice of the lambasting of politicians for dabbling in corrupt practices, albeit in the name of serving the nation? That in a democracy, people get the government they deserve, and they deserve what they get is a popular postulation to which people across the world subscribe irrespective of their nationality.

It is evident that it is the combined application of the politicians and the people that makes the political system either a success or a failure. It would, therefore, be flagrantly unfair to blame the politicians alone for the flaws and failures in the system. Why would people vote for a bunch of politicians in preference to another set of them unless they are convinced that it is for their own good? Nevertheless, when a voter is enamoured by the motto of a party to cleanse a system and then gets carried away by its promises to give him free electricity, water and WiFi if returned to power, what does the scenario reflect?

Even if one were to argue that the end justifies the means, the idea of using freebies as a launchpad to install a stable and clean government is so full of holes that the plan is simply not sustainable. There is no case for using up the taxpayer’s money for doling out sops which are non-productive in nature. The practice could prove infectious and lead to unhealthy competition among rival political parties that may end up trying to outwit each other in one-upmanship. Eventually, the vicious circle would likely end up as a millstone around the neck of the taxpayer.

Say No to Freebies

It is hardly realistic to expect the political parties to tire of the freebie culture and change their game plan. It is no different than expecting a leopard to change its spots. Even a party which takes pride in having a vision for Delhi has to play along the game of realpolitik. It is entirely in the realm of the people’s sagacity to see through the futility of the freebie culture and stake claim for the rightful glory of the national capital’s stature for Delhi.

(The article “Will Delhi Become Victim of Freebie Culture Yet Again?” published in magazine Uday India in January 04, 2020 English edition)

81 thoughts on “Will Delhi Become Victim of Freebie Culture Yet Again?”