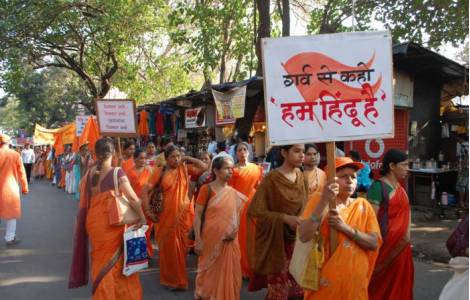 Hindus do not look for safety in numbers. Nor do they live in clusters. They draw strength and sustenance from the reassuring words contained in many ancient Hindu texts that Dharma which they uphold would come to their rescue in times of need. It is this unshakeable belief that enables them to live in peace and total safety even in the far-flung areas of the world where they migrate to and find themselves to be very few in number. However, in their own native land, they find themselves victims of a queasy feeling of disquietude with regard to their religion vis-a-vis anti-Hindu forces.

Much as they are confident about the everlasting nature of Sanatana Dharma, the ancient name by which their religion is known, they have to come to terms with today’s life in a multi-religious and multi-cultural society. An eternal code of faith and conduct for all the people of all the time, Sanatana Dharma, which is arguably the oldest living religion in the world, is inherently too strong for any challenge or threat. How could a body of faith which is believed to be older than the beginning of time itself, as the latter is known and understood, be ever brought to an end by anybody? However, how realistic is their outlook of Sarvadharma Samabhavana in today’s world of realpolitik?

Islam and Christianity were inducted into Hindustan by exotic elements when the defences of India were at its nadir. Introduced either flagrantly at the point of the sword by invaders or surreptitiously by missionaries, both the Abrahamic religions went on to expand their presence by employing practically any and every conceivable means. This process has been a continuous and ongoing one, with no letup. Despite the obvious fact that the two religions vigorously practised proselytization, the Hindus never felt threatened about their own faith being overrun. However, their welcoming attitude has been abused and exploited by the aliens. Even before the realization that their religion faced the probability of being overrun, they had become mute witnesses to a flurry of events and developments that set the alarm bells ringing.

The Muslim invaders who conquered swathes of territories in Hindustan did not simply arrive to rule, live and let people live in peace. They looted temples, ransacked and razed them, mutilated the sculptures of deities and used the broken pieces of sculptures to lay beneath the steps of the mosques they built so as to enable the ‘faithful’ to desecrate the deities by stepping on their scattered remains on their way in and way out. They either massacred the Hindus who resisted or forcibly converted them to their religion. The Moghul rulers used their sword power to marry helpless Hindu princesses and stock their harems with abducted Hindu women, which enabled them to father Muslim progeny unabated. 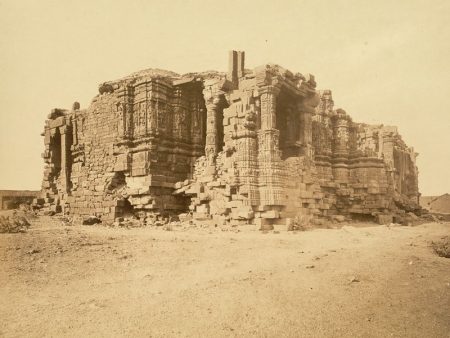 The medieval age practice of conquering and forcibly converting the losers to Islam gave way to deception, deceit, the allurement of money from the Gulf countries and the dark concept of Love Jihad in the post-Independence India. Love Jihad started gaining currency, with economically poor girls from vulnerable social background falling prey to the ensnarement tactics of Love Jihadis. Once they fell into the trap of marriage, they were brainwashed, converted to the Jihadi’s religion and left in the lurch to fend for themselves and their child born out of wedlock. Although the Hindu community has, of late, started taking such destitute women and menfolk cheated into conversion by deceit and allurement, back into their fold after a ‘Ghar Wapsi’ ritual, there are any number of victims who gave up the will to fight for their right to freedom of worship and suffer in silence. The Jihadi elements from across the border who infiltrate into India and their brainwashed Indian tutelage have the avowed goal of establishing Ghazwa-e-Hind, an Islamic India where no other religion is admissible.

Lately, because of the Narendra Modi-led NDA government in power and the latter tightening the screws on them, it is increasingly becoming difficult for them to penetrate the country, pump in money and weapons and hijack the misguided youth to their cause. However, yet they cannot be written off as a phenomenon of the past. They are not alone in their goal of breaking the nation. Communists, Naxals, Urban Naxals, frustrated and failed politicos, Tukde-Tukde gangs, Award wapsi gangs, misguided splinter groups of youth, pseudo-secular forces, self-proclaimed intellectuals from the fields of arts, literature, filmdom and the barons of the sold-out media, et al provide open or implicit support to the enemies of the nation. Unless the government breaks the nexus of these insidious elements by enforcing a firm anti-conversion law with teeth, the question mark on the nation’s territorial integrity and unity would only get bigger.

On a parallel track, conversion of India into a Christian nation is the sworn aim of the Christian evangelists who have access to unquantifiable amounts of funds and political clout from international agencies for their cause. They have their roadmap and game plan ready, with the number of churches to be established and people to be converted, all during a certain time frame, in their laundry list of the action plan. In a methodical businesslike way of carrying out mass conversions, tried and tested in the poor countries of Africa and Asia, they have been relentlessly pursuing the achievement of their goal at a furious pace.

The non-BJP governments of the past and the present in states like Andhra Pradesh, Punjab, Kerala and Tamil Nadu have been either providing them oblique support in their nefarious activities or at least turning a blind eye to the goings on. Besides resorting to mass conversions, the evangelists have displayed a distinct lack of qualms or compunction about penetrating Hindu religious establishments and places of worship and turning them into improvised Christian establishments, where Hindu religious practices are altered, adapted and replaced by the Christian way of worship. It has been noticed that they are willing to go to any length and stoop to any depth to subvert Hinduism.

Currently, it is a downright despicable situation in which the Hindu community finds itself in, unable to defend itself from the pincer-like attack of Islamic and Christian fundamentalists. The NDA government at the Centre is the last hope for Hindus who do not want to become rootless Rohingiyas of tomorrow. The government has prudently, and with a degree of success, tried to wean the moderate and peace-loving sections of the minority communities from the fundamentalist elements among them. More importantly, it would do well to continue to keep the brood of the Hindu community safely under its wings. This is the Raj Dharma that it should follow to keep the nation’s territorial integrity and unity safe. Should the social fabric of the Hindu community be irreparably damaged on account of the government’s failure on this front, the community’s absolute decimation and a resultant fratricidal war between the two Abrahamic religions for hegemony could hardly be ruled out.

91 thoughts on “Is Hinduism Losing Ground at Home?”