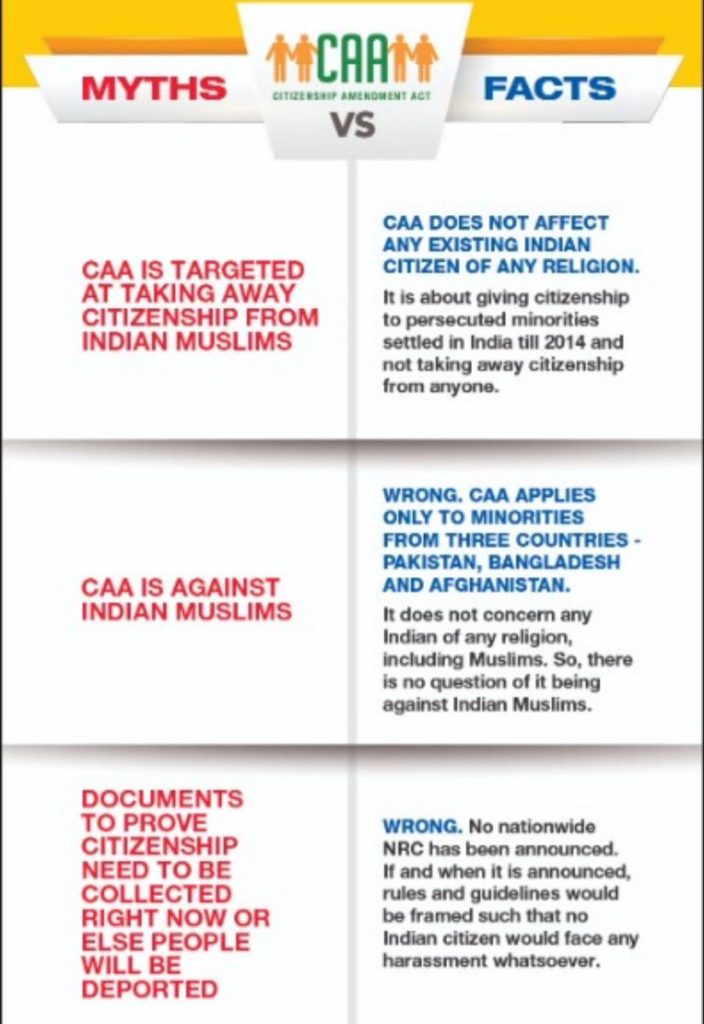 The Citizenship Amendment Bill (CAB), which metamorphosed into the Citizenship (Amendment) Act (CAA), was a watershed in independent India’s legislative history. It also had a cascading effect on political discourse and social harmony in the country. Apart from becoming a momentous piece of legislation, the CAA set off a national dialogue involving the elite and the common man alike. Unfortunately, it also triggered off violent protests against the Act. While the legislative procedure went through rather smoothly, the resulting protests revealed the dark underbelly of our society.

The frustrated conglomeration of anti-BJP political parties, which had miserably failed to stop the National Democratic Alliance (NDA) juggernaut in the Parliamentary elections of 2019 seized the opportunity to turn the smooth legislation into a contentious issue. It fomented trouble by depicting the Act, which had the territorial integrity and the people’s unity at its core, as a deliberate attempt by the BJP-led federal government to sabotage the secular ethos of the nation and polarise the people on communal lines. Pseudo intellectuals, disgruntled artistes, paid segments of MSM, popularly dubbed as Presstitutes, and the religious bigots quickly came to the fore.

They merrily got onto the bandwagon of the frustrated Opposition parties and started making misleading pronouncements, inflammatory speeches and fiery statements with the aim of projecting the CAA as a purported act of targeting a minority community. The proverbial Pied Piper of Hamelin succeeded in hoodwinking the gullible and the naive into following him in catching the non-existent rat of a threat to Secularism. The  common man got caught in a tizzy and started mouthing inane words of saving the people from getting polarised by the very government which had meant to segregate the grain from the chaff.

Some ignorant and misguided youths were verily baffled by the irrelevant and irrational arguments propagated against the Act and got shanghaied into believing that he was part of a movement purportedly launched to preserve the unity between the majority community and the perceived endangered minority community. In the insidious process, the intruders from across the border including the Rohingya Muslims and non-refugee infiltrators from Bangladesh, trouble-makers and anti-nationals who had illegally sneaked into the country for  destroying a united India, were projected as bosom friends.

Resultantly, there ensued a war of words for and against the Act in the social and mainstream media (MSM). The trigger-happy sections of the student community stepped out of the university campuses, which caused the spilling of trouble onto the road. The tukde tukde gangs and urban Naxals were among the forefront, using the unwary students as a human shield against the Police. Trains and other properties of Indian Railways were gutted and railway lines damaged in some States. Buses, auto-rickshaws and other forms of public properties were also damaged and vandalised. Rallies of slogan-shouting protestors, having no knowledge of the provisions of the CAA, started sprouting, much to the annoyance and discomfort of the commuters.

Police and other law enforcing agencies stepped in and initiated action against the rioters and other anti-nationals. The student community, human rights activists and political instigators who had all jumped into the fray to cause trouble and disturb the peace and quiet were among the first to cry foul at the police action. They not only distanced themselves from their moral and legal responsibilities but also began endangering the lives of the participants in the protest marches as well as the law enforcing personnel. They decried the perceived intolerance, injustice and ‘murder of democracy’.

The very same people, who had earlier exercised their democratic right to elect the lawmakers that passed the Bill in the temple of democracy after going through the due process, got deeply divided into two categories: those who respected the law and supported CAA; and those who saw communal ghosts where there was none and cried blue murder. Needless to say, there were many fence-sitters who needed not much persuasion to take sides. The inglorious upshot of the entire exercise of the protest marches and the accompanying violence was that not many participants in the exercise were conversant with the provisions of the new law or what it intended to accomplish.

The sporadic incidents of protests held across India over the CAA were based on the flawed argument that it intrinsically endangered the nation’s basic tenet of Secularism. The Central government was aghast at the loss of human lives on both sides of the law and wanton destruction of public property running into several crores. It was appalling to see that despite ignorance about the Act among the marching and stone-pelting protestors, they levelled baseless allegations against the Union government.

The government asserted time and again that the aim of the Act was only to give Indian citizenship to refugees of the minority religious groups in Pakistan, Bangladesh and Afghanistan and not to deport anybody from India; and that bonafide citizens need not fear deportation regardless of the community to which they belonged. However, the organisers of the protest marches had their own axe to grind. They rubbished all genuine claims of the Central government in support of the Act.

The unscrupulous organisers of the protest marches were further emboldened by the overtures received from across the border. Pakistan, which is ever ready to malign India’s image in the international fora, gleefully orchestrated a vilification campaign against India. It accused India of isolating Indian Muslims with the idea of stripping their lawful nationality and deporting them. Nevertheless, it could not cause even a scratch in the refurbished image of India, a successful accomplishment of the Narendra Modi government’s foreign policy. Yet another claim of Pakistan of being a staunch supporter and custodian of the interests of the Indian Muslim community fell flat in the eyes of the international community.

Within the country, the shriller the discordant voices of dissent became, the clearer and more obvious it became to the discerning public and the sane political observers that there was no going back on the issue. Both the Union government, as well as the BJP, have categorically stated that they are determined to go ahead and see the enforcement of the Act  to its logical conclusion. They have repeated time and again that the CAA was a long-pending national priority and had nothing to do with the National Citizenship Register (NCR).

As of now, the NCR is an issue only concerning the State of Assam, and that too at the directive of the Supreme Court. Likewise, the National Population Register (NPR) had no bearing on the NCR or the CAA. There is, therefore, no point in arriving at false conjectures by interlinking the CAA, NPR and NCR. The government and the BJP have repeatedly been assuring the Muslim community that there was absolutely no threat to it. All said and done, nothing more is to be read on the issue than the fact that CAA is a clear manifestation of the NDA government’s resolve to fulfil its electoral promises.

87 thoughts on “The Aftermath of CAA”