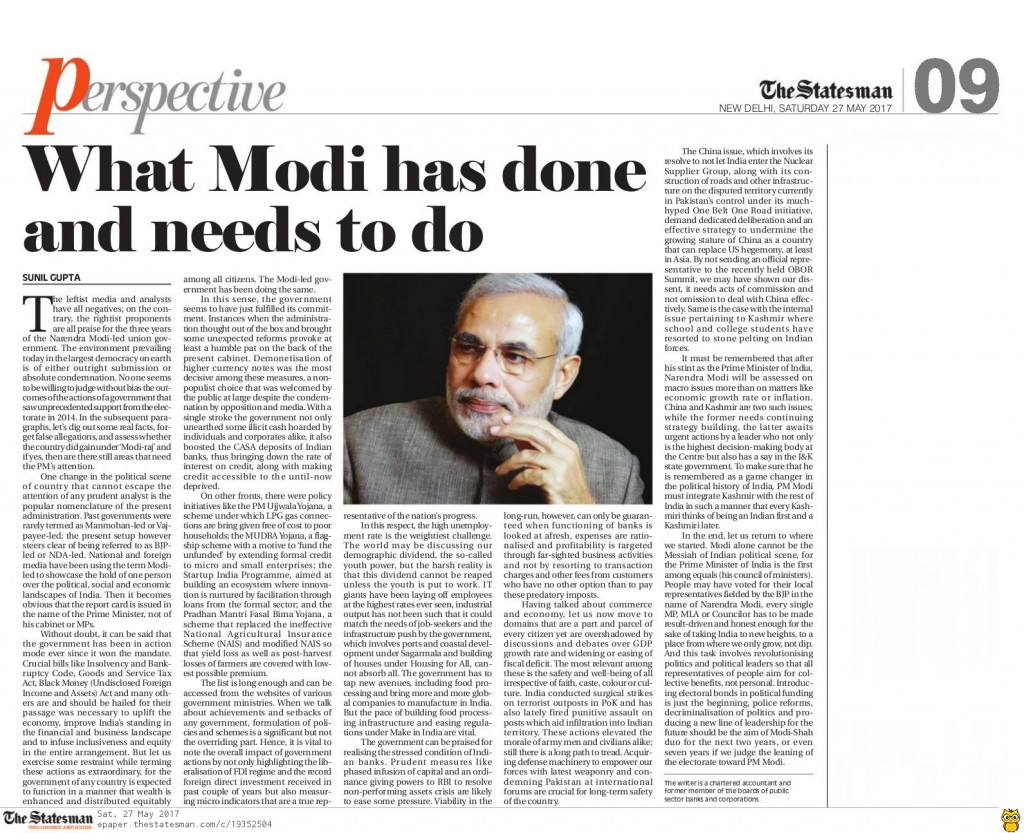 The leftist media and analysts have all negatives; on the contrary, the rightist proponents are all-praise for the three years of Narender Modi-led union government. The environment prevailing today in the largest democracy on earth is of either outright submission or absolute condemnation. No one seems to be willing to judge without bias the outcomes of the actions of a government that saw unprecedented support from the electorate in 2014. In the subsequent paragraphs, let’s dig out some real facts, forget false allegations, and assess whether the country did gain under the ‘Modi-raj’ and if yes, then are there still any areas that need the PM’s attention.

One change in the political scene of country that cannot escape the attention of any prudent analyst is the popular nomenclature of the present administration. Past governments were rarely termed as Manmohan-led or Vajpayee-led; the present setup however steers clear of being referred to as BJP-led or NDA-led. National and foreign media have been using the term Modi-led, to showcase the hold of one person over the political, social and economic landscapes of India. Then it becomes obvious that the report card is issued in the name of the Prime Minister, not for his cabinet or MPs.

Without doubt, it can be said that the government has been in action mode ever since it won the mandate. Crucial bills like Insolvency and Bankruptcy Code, Goods and Service Tax Act, Black Money (Undisclosed Foreign Income and Assets) Act and many others are and should be hailed for their passage was necessary to uplift the economy, improve India’s standing in the financial and business landscape and to infuse inclusiveness and equity in the entire arrangement. But let us exercise some restraint while terming these actions as extraordinary, for a government of any country is expected to function in a manner that wealth is enhanced and distributed equitably among all citizens. The Modi-led government has been doing the same.

In this sense, the government seems to have just fulfilled its commitment. Instances when the administration thought out of the box and brought some unexpected reforms provoke at least a humble pat on the back of the present cabinet. Demonetisation of higher currency notes was the most decisive among these measures, a non-populist choice that was welcomed by the public at large despite the condemnation by opposition and media. With a single stroke the government not only unearthed some illicit cash hoarded by individuals and corporates alike, it also boosted the CASA deposits of Indian banks, thus bringing down the rate of interest on credit, along with making credit accessible to the until-now deprived.

On the other fronts, there were policy initiatives like the PM Ujjwala Yojana, a scheme under which LPG gas connections are bring given free of cost to poor households; the MUDRA Yojana, a flagship scheme with a motive to ‘fund the unfunded’ by extending formal credit to micro and small enterprises; the Startup India Programme, aimed at building an ecosystem where innovation is nurtured by facilitation through loans from the formal sector; and the Pradhan Mantri Fasal Bima Yojana, a scheme that replaced ineffective National Agricultural Insurance Scheme (NAIS) and modified NAIS so that yield loss as well as post-harvest losses of farmers are covered with lowest possible premium.

The list is long enough and can be accessed from the websites of various government ministries. When we talk about achievements and setbacks of any government, formulation of policies and schemes is a significant but not the overriding part. Hence, it is vital to note the overall impact of government actions by not only highlighting the liberalisation of FDI regime and the record foreign direct investment received in past couple of years but also measuring micro indicators that are a true representative of nation’s progress.

In this respect, the high unemployment rate is the weightiest challenge. The world may be discussing our demographic dividend, the so-called youth power, but the harsh reality is that this dividend cannot be reaped unless the youth is put to work. IT giants have been laying off employees at the highest rates ever seen, industrial output has not been such that it could match the needs of job-seekers and the infrastructure push by the government, which involves ports and coastal development under Sagarmala and building of houses under Housing for All, cannot absorb all. The government has to tap new avenues, including food processing and bring more and more global companies to manufacture in India. But the pace of building food processing infrastructure and easing regulations under Make in India are vital.

The government can be praised for realizing the stressed condition of Indian banks. Prudent measures like phased infusion of capital and an ordinance giving powers to RBI to resolve non-performing assets crisis are likely to ease some pressure. Viability in the long-run, however, can only be guaranteed when functioning of banks is looked at afresh, expenses are rationalised and profitability is targeted through far-sighted business activities and not by resorting to transaction charges and other fee from customers who have no other option than to pay these predatory imposts.

Having talked about commerce and economy, let us now move to domains that are a part and parcel of every citizen yet are overshadowed by discussions and debates over GDP growth rate and widening or easing of fiscal deficit. The most relevant among these is the safety and well-being of all irrespective of faith, caste, colour or culture. India conducted surgical strikes on terrorist outposts in PoK and has also lately fired punitive assault on posts which aid infiltration into Indian Territory. These actions elevated the morale of army men and civilians alike; still there is a long path to tread. Acquiring defense machinery to empower our forces with latest weaponry and condemning Pakistan at international forums are crucial for long-term safety of the country.

The China issue, which involves its resolve to not let India enter the Nuclear Supplier Group, along with its construction of roads and other infrastructure on the disputed territory currently in Pakistan’s control under its much-hyped One Belt One Road initiative, demand dedicated deliberation and an effective strategy to undermine the growing stature of China as a country that can replace the US hegemony, at least in Asia. By not sending an official representative to the recently held OBOR Summit, we may have shown our dissent, it needs acts of commission and not omission to deal with China effectively. Same is the case with the internal issue pertaining to Kashmir where school and college students have resorted to stone pelting on Indian forces.

It must be remembered that after his stint as the Prime Minister of India, Narendra Modi will be assessed on macro issues more than on matters like economic growth rate or inflation. China and Kashmir are two such issues; while the former needs continuing strategy building, the latter awaits urgent actions by a leader who not only is the highest decision making body at the Centre but also has a say in the J&K state government. To make sure that he is remembered as a game changer in the political history of India, PM Modi must integrate Kashmir with the rest of India in such a manner that every Kashmiri thinks of being an Indian first and a Kashmiri later.

In the end, let us return to where we started. Modi alone cannot be the Messiah of Indian political scene, for the Prime Minister of India is the first among equals(his council of ministers). People may have voted for their local representatives fielded by the BJP in the name of Narendra Modi, every single MP, MLA or Councilor has to be made result-driven and honest enough for the sake of taking India to new heights, to a place from where we only grow, not dip. And this task involves revolutionising politics and political leaders so that all representatives of people aim for collective benefits, not personal. Introducing electoral bonds in political funding is just the beginning, police reforms, decriminalisation of politics and producing a new line of leadership for future should be the aim of Modi-Shah duo for the next 2 years, or even 7 years if we judge the leaning of the electorate toward PM Modi.

What Modi Has Done And Need To Do

90 thoughts on “What Modi has done and need to do”