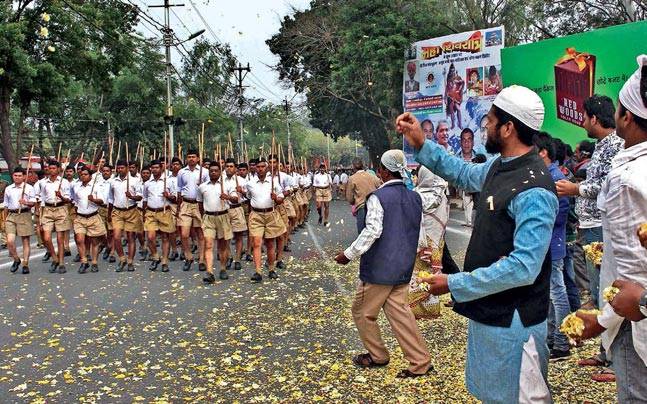 With a 100% literacy rate to its credit, how could the backwaters of Kerala be any less congenial for the lotus to bloom than places loosely termed to constitute the cow belt? With the saffron upsurge recently witnessed in the Hindi heartland, and the inroads made in the northeastern states, the BJP has its sights set on making forays into the anti-BJP citadels in the southern part of the country, like Kerala, Karnataka and Tamil Nadu, to establish its pan-India appeal and reach. As of now, while the party has a modicum of respectability with a seat share of 44 in a House of 225 in Karnataka, its headcount in the assemblies of the other two states reads a dismal one in Kerala and a disastrous nil in Tamil Nadu. This notwithstanding the traditional sway that the party’s ideological forerunner the Rashtriya Swayamsevak Sangh (RSS) has among chunks of the right thinking men and women, especially in Kerala, with fastidious nationalist moorings and commitment and total disregard for regionalism, and the immense popularity of Prime Minister Narendra Modi.

The task needs to be addressed by the BJP in right earnestness, not only to consolidate its position as the largest and most successful political force in the future rounds of elections among the wide spectrum of national parties, most of which are currently in a state of disarray and bedlam consequent upon the crushing defeats handed out to them during the last three years, but also to sustain its own winning streak. A clinching victory in Kerala in the next Assembly elections would undoubtedly pitchfork the party to a vantage position of strength and stability by throwing open a breach in the wall of resistance in state politics. Such a victory would also create a stronghold in the forefront of the party’s nationwide electoral strategy. A thumping victory in Kerala would truly herald BJP arrival in style in the south of the Vindhyas and mark the emergence of the party over the murky swirls of regionalism and fractious communalism as well as the corrupt ideological spins being infused into moribund political ideologies like Communism, Marxism and Naxalism in the state.

What needs to be done?

The BJP in Kerala has the unenviable disadvantage of having to fight an opportunistic alliance between leftist and communal forces. The overall political atmosphere in the state is surcharged with violence, which has already taken a heavy toll on the BJP workers. The BJP and the RSS cadres have been finding it increasingly difficult to resist the urge to retaliate, in the absence of a ray of hope for an early end to the relentless political violence spiralling out of control under the benign watch of the ruling Communist Party of India (Marxist)-led Left Democratic Front coalition. The party’s central leadership needs to find a quick solution to the problem of unabating violence to keep the morale of its state cadre intact and to convince the electorate about the party’s commitment to upholding democratic values in the face of extreme provocation. To this end, it has to send, in tandem with the Union Home Ministry, a strong message across that it would brook no more systematic perpetration of attacks on its human resources and assets in the state. While doing so, it must ensure that the local leadership of the party is sufficiently strengthened and empowered with adequate resources and wherewithal to enable it to keep its flock together under its wings, given the ground realities.

This is imperative to boost up the strong Keralite pride in the local leadership in its equation with the central leadership. The party would do well to persuade the Union Home Ministry to bring the state government around to realise that there indeed are red lines, which should not be crossed by the ruling coalition as well as the state machinery while tackling the rising political violence. The state government should be gently but firmly reminded by Delhi that the state would, under no circumstances, be permitted to degenerate into a lawless political wilderness in the absence of firm and timely action by the state machinery. Again, this exercise needs to be carried out with alacrity and without engaging disproportionate use of authority lest the state government should cry foul and try to present itself, in the eyes of the people, as a victim or martyr to a perceived case of the Centre trying to usurp the state’s prerogative to maintain law and order, a state subject under the Constitution. A series of well-orchestrated moves by the local and central leadership of the BJP with the support of the Home Ministry to achieve the goal is the need of the hour.

Furthermore, the state has been witness to the recent phenomenon of the rearing of their ugly heads by international terrorist organisations like the Islamic State and the Al Qaeda and other home-grown jehadi outfits. Of late, there has been a series of incidents of individuals, and even families sneaking out of India en masse to distant lands like Iraq, Syria and Afghanistan, to join banned terrorist organisations and fight insidious religious wars against their perceived international enemies, including India. The state has earned the dubious distinction of having become a breeding ground for international terrorism. Evidently, the terrorists-in-the-making are indoctrinated, radicalised and brainwashed beforehand to make the vulnerable targets to become thoroughly dissatisfied with the democratic institutions and concepts such as secularism, nationalism, India’s cultural ethos, communal harmony, etc. The disgruntled elements try to subvert the system and pose a grave threat to peace, development and harmony in the multicultural, egalitarian society that India has been home to.

What has been happening in trickles so far should not be allowed to turn into a tidal wave. Indoctrination centres, training grounds, sources of funds, etc have to be identified and nixed. Evidently, given its ideological handicap and appeasement policy towards minority communities, the Marxist government in the state cannot be expected to put an end to this menace. The Centre must step in and convert the state into a strong bulwark against the rising spectre of terrorism. A BJP government in the state would ideally complement the Centre’s moves in this regard. This fact should be projected as an intricate part of the party’s program of awareness of the dangers of terrorism during its election campaign. That a BJP government in the state would be the one most capable of taking suitable measures on the ground in sync with the Centre’s efforts and initiatives aimed at wiping out terrorism should be an inherent part of the party’s roadmap to success. No stone should be left unturned to convince the people of Kerala that the state needs to be reconverted into a safe haven for the peace-loving citizens like in the past as against the hotbed of terrorism and mindless political violence that it has been reduced to over a period of time.

The NRI community abroad is a living testimony to the promptness and diligence with which the BJP government at the Centre has successfully diffused countless numbers of crisis situations in which the former had found itself in during the last three years. This segment of the community has immensely benefited from the Central government’s service-to-the-people policy both from Delhi as well as through the Indian diplomatic missions abroad. A large number of Keralites working abroad have been successfully repatriated during wars and warlike situations and also relocated during times of peace. No case was too big or too small for the Union government. The affected people of Kerala living abroad or currently at home could collectively form a notional goodwill Ambassador for carrying out BJP’s people-oriented policies more effectively. Meanwhile, the party should also think of a way to achieving this end. For example, the BJP national leadership can consider appointing or deputing K J Alphons (Alphons Kannanthanam), a bureaucrat-turned-politician from Kerala, as Special Advisor or Poll Strategist or Campaign Chief with the aim of winning the next Assembly polls in the state. A 1979 batch IAS officer, Kannanthanam had quit the bureaucracy in 2006 and got elected as an independent Member of the Legislative Assembly (MLA) from Kanjirappally in Kottayam district of Kerala, with a huge majority. He had joined the BJP in 2011. In 1989, as the District Collector of Kottayam, Alphons had pioneered the literacy movement and made Kottayam the first 100% literate town in India. Kottayam had also achieved a quality health index better than the United States of America, when he was the District Collector.

We Have Been There and Done It Before

The post-poll developments in Uttar Pradesh, which has turned out to be BJP’s biggest electoral success yet, have accentuated the truth that a strict implementation of preventive laws and wholehearted acceptance of people welfare programs are capable of catapulting an already popular government to dizzying heights. This is arguably the most singular lesson from the party’s strategy that saw it romp home at the end of a tortuous journey in UP. The people of Kerala have to be convinced that the BJP government in the offing in the state is one that would care and dare; the government would care for people’s welfare and the state’s development and dare to do the right thing, with nary a thought of appeasement to any community, no matter how minority or majority in terms of its numerical strength. The government would function strictly in conformity with the constitutional provisions and strive to enact laws in terms of the Directive Principles of State Policy for improving the quality of life and not for curtailing people’s freedom. The rule of law would be upheld ever and anon. The minority communities would be equal partners in development.

These are the messages that have to be carried across the length and breadth of the state. The needs and requirements of the constituents must be ascertained and stitched into a garb of glory in the form of the party’s program of action. People understand the strengths and constraints of every party and welcome their candid admission of what is likely to pan out once the die is cast. The people of Kerala are not wired any differently from the people of states that have returned BJP governments, except that they have thus far been supporting the parties, flogging dead ideologies like Communism to bring them back to life. With a candid presentation by the BJP of how precisely they propose to transform Kerala into a dynamic state, there is no reason why the people would not deem it fit to give a decent burial to the ideologies long dead and say goodbye to the fractious communal elements, always on the double to fish in the murky political waters. There is no shying away for the BJP from identifying itself as a party for Hindutva. Now, Hindutva is no more a bad word, not even in Kerala. Results are all that people are interested in. If a party that espouses Hindutva could deliver, as it has already demonstrated elsewhere, give them a break. It is a real time tie in Kerala between pragmatism and ideology. With conviction and diligence in its arsenal, the BJP has every reason to feel upbeat about its ability to hard sell pragmatism in God’s Own Country as it has done elsewhere, time and again.

87 thoughts on “Turning Kerala from Red to Saffron”