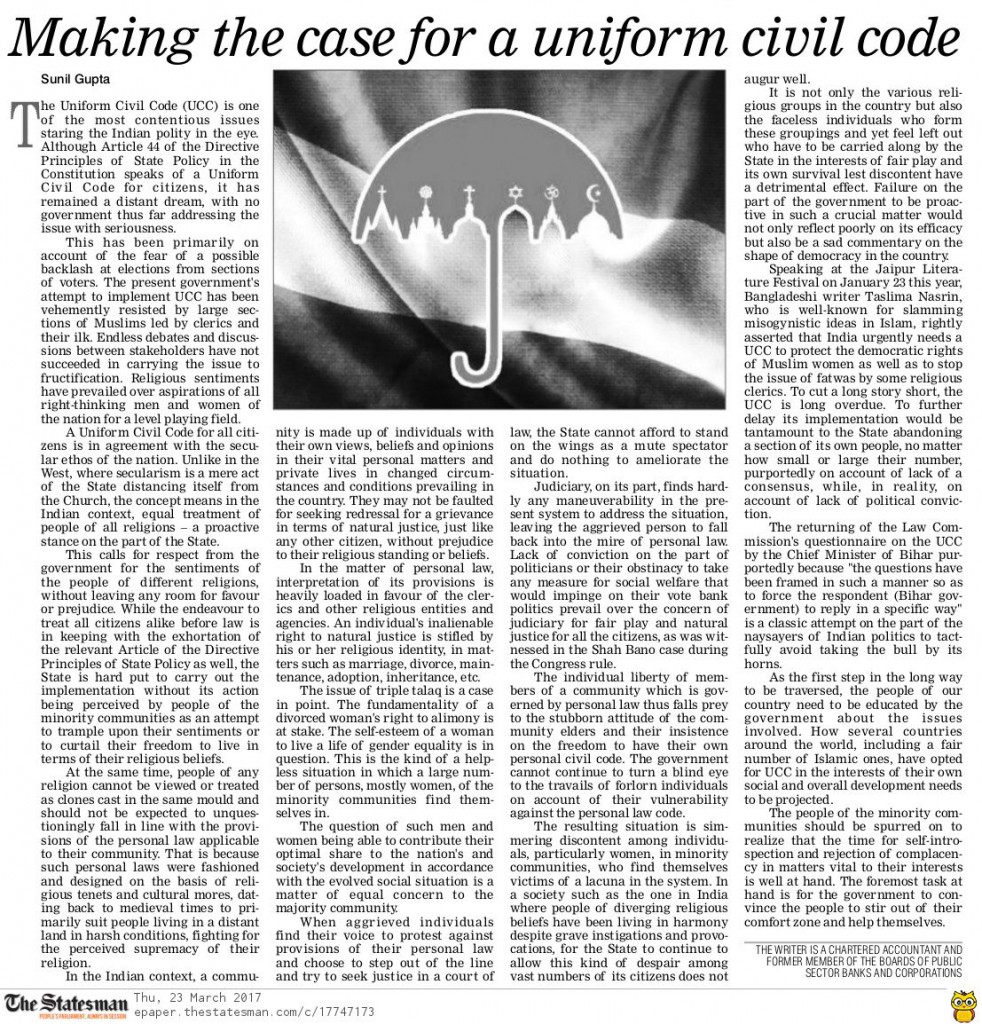 The Uniform Civil Code (UCC) is one of the most contentious issues staring the Indian polity in the eye. Although Article 44 of the Directive Principles of State Policy in the Constitution speaks of a Uniform Civil Code for the citizens, it has remained a distant dream, with no government thus far addressing the issue with seriousness.

This has been primarily on account of the fear of a possible backlash at elections from sections of voters. The present government’s attempt to implement UCC has been vehemently resisted by large sections of the Muslims led by clerics and their ilk. Endless debates and discussions between stakeholders have not succeeded in carrying the issue to fructification. Religious sentiments have prevailed over aspirations of all the right-thinking men and women of the nation for a level playing field.

A Uniform Civil Code for all the citizens is in agreement with the secular ethos of the nation. Unlike in the West, where secularism is a mere act of the State distancing itself from the Church, the concept means in the Indian context, equal treatment of people of all religions – a proactive stance on the part of the State.

This calls for respect from the government for the sentiments of the people of different religions, without leaving any room for favour or prejudice. While the endeavour to treat all citizens alike before law is in keeping with the exhortation of the relevant Article of the Directive Principles of State Policy as well, the State is hard put to carry out the implementation without its action being perceived by the people of the minority communities as an attempt to trample upon their sentiments or to curtail their freedom to live in terms of their religious beliefs.

At the same time, people of any religion cannot be viewed or treated as clones cast in the same mould and should not be expected to unquestioningly fall in line with the provisions of the personal law applicable to their community. That is because such personal laws were fashioned and designed on the basis of religious tenets and cultural mores, dating back to medieval times to primarily suit the people living in a distant land in harsh conditions, fighting for the perceived supremacy of their religion.

In the Indian context, a community is made up of individuals with their own views, beliefs and opinions in their vital personal matters and private lives in changed circumstances and conditions prevailing in the country. They may not be faulted for seeking redressal for a grievance in terms of natural justice, just like any other citizen, without prejudice to their religious standing or beliefs.

In the matter of personal law, interpretation of its provisions is heavily loaded in favour of the clerics and other religious entities and agencies. An individual’s inalienable right to natural justice is stifled by his or her religious identity, in matters such as marriage, divorce, maintenance, adoption, inheritance, etc.

The issue of triple talaq is a case in point. The fundamentality of a divorced woman’s right to alimony is at stake. The self-esteem of a woman to live a life of gender equality is in question. This is the kind of a helpless situation in which a large number of persons, mostly women, of the minority communities find themselves in.

The question of such men and women being able to contribute their optimal share to the nation’s and society’s development in accordance with the evolved social situation is a matter of equal concern to the majority community.

When aggrieved individuals find their voice to protest against the provisions of the personal law and choose to step out of the line and try to seek justice in a court of law, the State cannot afford to stand on the wings as a mute spectator and do nothing to ameliorate the situation.

Judiciary, on its part, finds hardly any maneuverability in the present system to address the situation, leaving the aggrieved person to fall back into the mires of the personal law. Lack of conviction on the part of politicians or their obstinacy to take any measure for social welfare that would impinge on their vote bank politics prevail over the concern of Judiciary for fair play and natural justice for all the citizens, as was witnessed in the Shah Bano case during the Congress rule.

The individual liberty of members of a community which is governed by personal law thus falls prey to the stubborn attitude of the community elders and their insistence on the freedom to have their own personal civil code. The government cannot continue to turn a blind eye to the travails of the forlorn individuals on account of their vulnerability against the personal law.

The resulting situation is a simmering discontent among individuals, particularly women, in minority communities, who find themselves victims of a lacuna in the system. In a society such as the one in India where people of diverging religious beliefs have been living in harmony despite grave instigations and provocations, for the State to continue to allow this kind of despair among vast numbers of its citizens does not augur well.

It is not only the various religious groups in the country but also the faceless individuals who form these groupings and yet feel left out, who have to be carried along by the State in the interests of fair play and its own survival lest discontent have a detrimental effect. Failure on the part of the government to be proactive in such a crucial matter would not only reflect poorly on its efficacy but also be a sad commentary on the poor shape of democracy in the country.

Speaking at the Jaipur Literature Festival on January 23 this year, Bangladeshi writer Taslima Nasrin, who is well-known for slamming misogynistic ideas in Islam, rightly asserted that India urgently needs the UCC to protect the democratic rights of Muslim women as well as to stop the issue of fatwas by some religious clerics. To cut a long story short, the UCC is long overdue. To further delay its implementation would be tantamount to the State abandoning a section of its own people, no matter how small or large their number, purportedly on account of lack of a consensus, while, in reality, on account of lack of political conviction.

The returning of the Law Commission’s questionnaire on the UCC by the Chief Minister of Bihar purportedly because “the questions have been framed in such a manner so as to force the respondent (Bihar government) to reply in a specific way” is a classic attempt on the part of the naysayers of Indian politics to tactfully avoid taking the bull by its horns.

As the first step in the long way to be traversed, the people of our country need to be educated by the government about the issues involved. How several countries around the world, including a fair number of Islamic ones, have opted for UCC in the interests of their own social and overall development needs to be projected.

The people of the minority communities should be spurred on to realize that the time for self-introspection and rejection of complacency in matters vital to their interests is well at hand. The foremost task at hand is for the government is to convince the people to stir out of their comfort zone and help themselves.

Making The Case For A Uniform Civil Code

92 thoughts on “Making the case for a Uniform Civil Code”