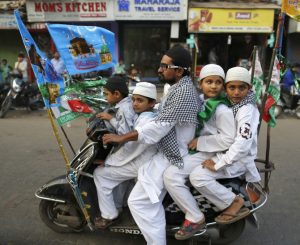 Some people keep lamenting that as a community the Indian Muslims have not yet taken the centre-stage in national politics. This is not because of any evil design or malaise on the part of an external factor! Although there is no stopping the members of the community from asserting themselves as rightful stakeholders in the overall development of the nation and proud partners in its inclusive growth, it is ironical that they are not, by and large, taking the plunge in their individual capacity in mainstream political exercise.

No doubt, there are exceptions, with a sprinkling of stalwarts from this religion dotting the political landscape, not as defenders of the community’s interests but as champions of inclusive growth of the nation. Barring such exceptions that are far and few between, the Muslim community as a whole seems contented to remain on the periphery of India’s national politics.

It is evident that such a delusion is on account of the obscurantism and regressive practices professed and imposed on their flock by the clerics by threatening punitive measures of utmost severity. The fear of a charge of apostasy leads to the total acceptance of the cleric’s interpretation of the religious text and the rigorous implementation of his diktat, resulting in the precipitating of a downright unhealthy practice – vote bank politics, which renders the community susceptible to bad blood and acrimony vis-a-vis other communities.

In a secular society such as ours, which has not been spared of charges of a slant, any community marked by its orientation and political alignment on religious lines, is bound to find itself in an unenviable position. That is because such a community will have to spend much of its time in burnishing its ideology and principles in the fire of integrity and sincerity while striving to establish its non-partisan credentials time and again much to its own discomfiture, and scepticism of the others. A community which is unwilling to clearly demarcate its political ideology and principles from the religion of its calling is bound to view politics and statecraft through the prism of religion.

Such a tendency distorts the real picture in a secular setup and alienates the community practising it from the people of other religions. It is all the more so in the case of India, which had been under the subjugation of Islamic rule for over 700 years during which the majority community suffered no end of religious persecution. To make matters more ominous and alarming for the majority community, independence from the colonial rule came with a very heavy price of a partition of the land and the people of a united India.

The traumatic experience of partition, followed by numerous wars and skirmishes with two of its neighbours that snatched swathes of land, and the demand for a separate Kashmir from some hostile elements hell-bent on wrecking the territorial integrity of the nation by resorting to violent means and with the active participation of an enemy country, have left the majority community in a tizzy. Such a tense atmosphere continually prevailing along the Indian borders and in the bordering states and the subsequent political travails have left the majority community much too wary of its own precarious position vis-a-vis communal politics.

The Indian government is all for keeping the nation’s human resource potential in check so as not to over-exceed the optimal level for ensuring sustained economic growth. Unlike the Hindus, Muslims do not practise small family norms due to religious considerations. With Islam believing in conversion, and in the absence of a law prohibiting conversion, the rapid increase in the numerical strength of the Muslim community necessarily means attrition in the population of the Hindu community in the form of conversions.

Resultantly, the Muslim population has been on a steady increase, a reason for heart burning for the Hindus, which views the shrinking margin of difference in the numerical strength of the followers of the two religions, with askance. Unchecked growth in the Muslim population, with nary a thought to the health of the nation’s economy or its dwindling resources, and the community’s conversion practices that eat into the numerical strength of the Hindus constitute the single largest retrograde practice adopted by the community inimical to an egalitarian society.

Education and a Narrow Vista

A quintessential Muslim child has the commencement of its academic career in a madrasa, the focus of which is on basic religious education, with its moorings based in a different place and a different time of a bygone era, not attuned to today’s fast-changing world. Having been brought up in a religious greenhouse within a controlled atmosphere, the child has no or minimal exposure to the scientific temper or the technological advancement that the changing times have ushered in.

The child’s mindset stays firmly implanted on the bedrock of a religion that brooks no changes or challenges from any quarters. Later on, it has to be torn asunder at some stage of the child’s metamorphosis into a fine specimen of a global citizen to become receptive to the process of evolution. Not a very convenient arrangement indeed! Here, it is worth recalling the observation made by eminent Indian-origin scientist Archana Sharma when she said, “It is mediocrity and not lack of resources and talent that is stopping India.” Archana is a senior scientist at the European Organisation for Nuclear Research (CERN), Geneva, Switzerland, and in 2012 she was very actively involved in the discovery of the Higgs boson.

Archana made this observation during her recent visit to India in the context of the dismal state of the Indian institutes for higher studies when it comes to providing quality education and research resources. Although the visiting academic made the observation with the entire Indian polity in mind, it makes one wonder what an Olympian leap it must call for of a child who is a product of a madrasa to become a successful alumnus of a distinguished institute of higher studies and research resources. If the quality of education imparted in a typical Indian school could be termed “mediocre”, what could be said about a madrasa and the kind of education that it offers, beside a moribund worldview?

Furthermore, reams can be written about the constricted lifestyle of a woman of the Muslim community vis-a-vis the increasing clamour for women’s liberation and their emancipation. A married woman’s travails, such as annulment of the marriage, polygamy, and property and inheritance rights, are some of the issues that keep the woman of this community in a bind, with no relief in sight, pending a total revamp of the religious laws governing the issues. As such, a common civil code is the need of the hour.

“One for all, and all for one” should be the motto for the enhancement of the quality of an individual’s life as well as the collective progress of the state. How can the congenial climate for the achievement of the individual’s betterment and the state’s good be ensured when a section of the society chooses to remain fixated on the distant past? An outdated system of education and indoctrination that discourages people from being heuristic for their own advancement eventually ends up giving cause to their becoming Luddites and a drain on the nation’s progress.

82 thoughts on “Stranglehold of Obscurantism and Regression on Muslim Society”