The NDA stands for clean governance and inclusive development as well as for the service of the nation in absolute contrast to the UPA government known for the dynastic rule, policy paralysis and scarcely anything beyond self-service 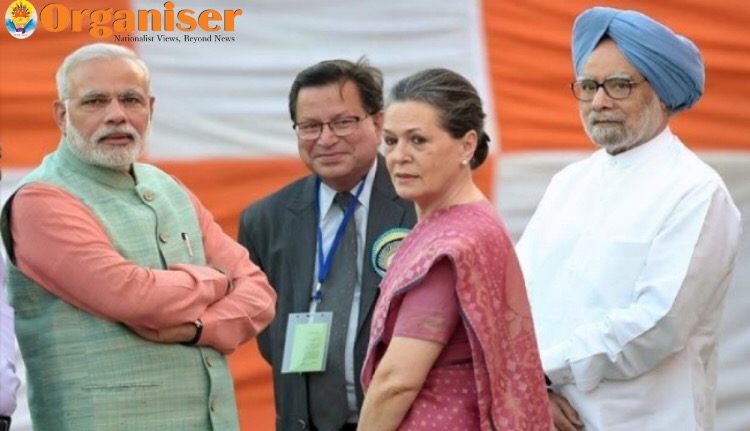 It may sound politically incorrect to state that two political stalwarts of that time were instrumental for breaking up a united India into two when it was poised to become a free country in 1947. Jawaharlal Nehru and M A Jinnah brought about the partition because of their unbridled prime ministerial ambitions. As both of them started vying with each other for the privilege of ruling the nation in the offing, partition of India became inevitable. M K Gandhi, who had spearheaded the freedom movement and gained the colossal stature of Mahatma, was averse to the idea of partition.

However, he was arm-twisted and emotionally blackmailed by Nehru into agreeing to the dismemberment of a bleeding India. Gandhi had even favoured placating Jinnah with the Premiership for the sake of keeping the country united. However, Nehru was insistent on having his own way just as Jinnah succeeded in extracting his pound of flesh. In the process of selection of the first Prime Minister of India, Sardar Vallabhbhai Patel was given short shrift although he was the preferred choice of the Congress party.

M K Gandhi cast his veto in favour of Nehru, little realising the shape of things about to unfold in the aftermath of the latter’s time in office. In brief, Nehru was catapulted to the coveted post of leading the nation by an act of personal choice by the Mahatma. This has cost the country four generations of dynastic rule by the Nehru-Gandhi family, with a foreign national thrown in. From the House of Windsor to the Nehru-Gandhi family, it was a classic case of a straight leap for India from the frying pan into the fire.

What is particularly distressing is the fact that the family, which claimed to have made some sacrifices during the freedom struggle, chose to reward itself with the legitimacy of the right to rule through elections when opposition parties still had teething troubles in the political arena. Once in power, this family spread its roots and branches and established its stronghold on crucial departments of governance. This, in turn, authorised it to elicit sensitive information or infuse false information to exploit the situation, whenever required. Such manipulative operations enabled this family to stay afloat in the political currents and subvert the bonafide activities of governments other than its own.

Power at Any Cost

In 1975, when the Allahabad High Court declared the election of Prime Minister Indira Gandhi to the Parliament null and void on charges of misuse of the official machinery and the Supreme Court upheld the High Court verdict, rather than stepping down PM Gandhi chose to hang on to power. When her party introduced certain Constitutional amendments that were struck down by the Supreme Court, she tried to control the judiciary by promoting judges favourably disposed towards the government in supersession of senior judges. The bureaucracy and the judiciary were exhorted by her dispensation to become committed to the government’s ‘ideology’ under the threat of being penalised. Moreover, she declared a state of Internal Emergency, curtailing democratic rights of the people for 11 months. The Emergency constituted a dark chapter in Indian democracy and demonstrated the dynasty’s determination to hang on to power and perpetuate its rule, at any cost.

Finger in the Honey Pot

The Nehru-Gandhi dynasty always had a finger in the honey pot of public money and missed no occasion or opportunity to spirit away from the public exchequer. Furthermore, it solicited and accepted kickbacks and commissions from weapons procurement deals, global tenders for natural resources, government projects, subsidies and funds allocated for welfare schemes, and practically any program or project where there was a significant turnover of public money. The banking sector was a chosen segment for their systematic plunder and financial misdeeds. There was a humongous volume of non-performing assets (NPAs), with neither a serious investigation in the matter ordered nor any of the defaulters or their accomplices held responsible or apprehended.

Pliant bigwigs of financial and related institutions were rewarded for their cooperation and services rendered to the government (read ruling party) in line with their policy of self-service. There was hardly any legal action against a minister, ruling party politician or erring official, industrialist or businessmen defaulting on bank loans, which ever resulted in a conviction. During the UPA regime, the requirements of the armed forces were totally ignored. Neither any weapons or equipment were indigenously manufactured nor any program of modernisation instituted. Any and every weapon or equipment had to be imported, through a maze of a corrupt system, with middlemen, who are forbidden, popping in and out all the time.

Charges of embezzlement of huge sums of government funds, kickbacks, commissions, illegal transfer of funds to mysterious overseas bank accounts and involvement of cronies and members of the political family dynasty made headlines in the mainstream media on a regular basis, with the sudden or mysterious disappearance of the trail of investigations, if any. To be sure, the leading family dynasty had become so hugely bloated with numerous charges of corruption and misdeeds that no one could ignore or overlook it any longer. Practically, every member of the said family was involved in some financial transgression or the other. The political family, at the helm of the UPA government, had undeniably become one of the most corrupt dynasties ever.

The National Democratic Alliance (NDA) government made it abundantly clear at the outset that it believed in clean governance and inclusive development. Schemes such as Demonetization, GST, initiatives to unearth black money at home and to bring back black money stashed abroad, efforts to reverse NPAs and convict the defaulters, constituted a shot in the arm for a jaded economy. Schemes such as the Swachh Bharat, cleansing and rejuvenation of Ganga, etc, restored in a demoralised nation its lost self-esteem and pride. The poor people benefited from various schemes for health and insurance coverage, bank accounts, self-employment, Beti Bachao Beti Padao scheme, access to electricity, water, cooking gas, etc.

Initiatives to strengthen and modernise the armed forces, keeping strict control on the terrorists and other troublemakers in J&K and keeping the enemy forces from across the border at bay, the successful surgical strike carried out in the enemy territory, etc, have rejuvenated the sagging morale of our defence forces. There is a long list of people-oriented schemes and infrastructure projects to connect villages, towns and cities by a network of roads, bridges and railways of international standards.

Furthermore, a successful foreign policy is a significant feather on NDA’s cap. To top it all is the crowning glory of no corruption charges on any minister or the government, notwithstanding the loose talk on Rafale, shot down by the apex court; and not to forget, the terrorism-free day-to-day life that people have been leading since 2014. Honestly, the NDA stands for clean governance and inclusive development as well as for the service of the nation in absolute contrast to the UPA government known for the dynastic rule, policy paralysis and scarcely anything beyond self-service!

(The article Dichotomy in Indian Politics: NDA for Service and UPA for Self-Service published in ‘Organiser’ )

97 thoughts on “Dichotomy in Indian Politics: NDA for Service and UPA for Self-Service”