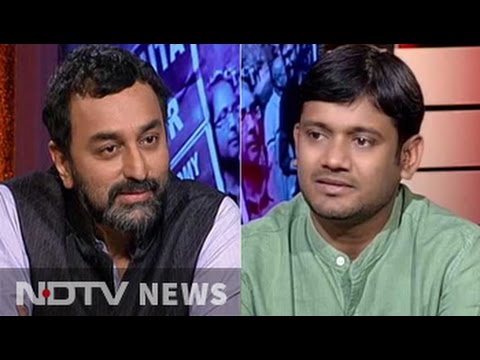 Naxals and Maoists are but “Gandhians with guns” (apostles of peace with a gun!). So says writer and columnist Arundhati Roy, who further claims that the Indian state has ever since Independence been fighting native minority groups of people in different parts of the country, who have been trying to assert their own “independence”. If these statements and claims sound outrageous, how about the proclamation by a reigning Chief Minister from a public platform that he is an anarchist? Downright unbelievable! And yet true! Never mind if this man (aka Arvind Kejriwal) who startled the nation with such cheap gimmickry in a bid to show off his supposedly out-of-the-box thinking and non-conventional methodology, was democratically elected by the people of his state for serving them and not for spreading deleterious views.

Not to forget the Azadi brigade, a bunch of young people, apparently with misplaced political ambitions and the support of some frustrated and failed Opposition parties, foaming and frothing at the mouth from the portals of prestigious academic institutions, about their right to ‘Azadi’. These rabid youngsters proudly support the stone-pelters in Kashmir and also a hardcore terrorist who was handed out the death sentence by the highest court of the land for trying to subvert the system and launching armed attacks on its democratic institutions.

Their insidious speeches in support of the banned militant outfits and mercenaries of India’s enemy countries are diligently reported verbatim, and their scurrilous writings are readily published by the mainstream media. The MSM also goes gaga over the purported emergence of youth power demanding its own space in national debates over any and every issue that captures their imagination, with no red lines whatsoever! No issue is too sacrosanct nor any institution too big for their attacks!

Complicity of the Press

None of such vituperative outpourings is possible or sustainable without the tacit support of sections of the MSM, which attributes the diatribes to a citizen’s fundamental right to freedom of expression enshrined in the Constitution of our country, the very concept of which is in peril, thanks to such reprehensible acts!

Nor is the Army spared venomous attacks by its detractors. A student leader who shot to dizzying heights of infamy overnight on account of his ‘Azadi’ diatribe, thanks to the wide media coverage he received, went on record to state that members of the Armed Forces who are deified by the Society are but school dropouts. According to him, the latter have joined the uniformed services merely for the sake of a salary and are, therefore, no real heroes. Recently, Communist Party of India (Marxist) Kerala unit secretary Kodiyeri Balakrishnan made outrageous allegations and accused the Indian Armed forces of kidnapping and raping women. Despite the Indian Army conducting many successful operations within our country, the media, NGOs, human rights groups and some politicians have often accused the Army personnel of violation of human rights or excessive and disproportionate use of force. It must be extremely frustrating indeed for the Army to operate in trying circumstances under the public glare and scrutiny by the MSM, which lacks the professional acumen or field experience to assess the judiciousness of the tactics or force used by the Army.

For instance, recently a Major of the Indian Army ingeniously made use a troublemaker, who was instigating a big group of stone-pelters to burn down a polling booth in the Kashmir valley, as a human shield. He did it solely to protect the precious lives of several civilians and men on government duty without any harm coming to that rabble-rouser. Instead of praising the Major, the media criticised him harshly and dubbed him as a violator of human rights.

Isn’t it ridiculous to talk about protecting human rights of a scoundrel caught red-handed for instigating a big group of murderous fanatical elements out to attack civilians and men on government duty? While the whole nation feted Major Leetul Gogoi as a hero and the Chief of the Army Staff honoured him with an award, disgruntled elements have been striving to malign him and besmirch the reputation of the Army. Sections of the mainstream media are more than willing to provide a platform for the bleeding hearts to air their poisonous views. When will they stop saying and doing things just for the sake of boosting TRP ratings and circulation numbers, and that too at the cost of our nation’s interests and citizens’ well-being?

The more vicious and audacious the attack on the nation’s territorial integrity and its sacrosanct symbols such as the national flag and national anthem and hallowed concepts of nationalism and patriotism, the more extensive is the MSM coverage and publicity! Yet another development of considerable intrigue is an Opposition leader’s recent meeting with some secessionist leaders in the troubled area of Kashmir that are under house arrest, over high tea. The meeting was held purportedly for discussing the road ahead in the matter of the resolution of the Kashmir imbroglio. The government has already declared that it would not talk to these secessionist leaders, but there is apparently no stopping maverick Congress leader Mani Shankar Aiyar from gallivanting in the treacherous waters of anti-national sentiments and separatist tendencies. The meeting, highly dubious in nature, was given the widest possible coverage by the MSM, and the participants were given undeserved publicity.

The long and short of the distressing sequence of events is that on the one hand errant individuals with ulterior motives and frustrated Opposition parties deliver anti-national and highly inflammatory speeches. They indulge in such highly reprehensible acts without any restraint because they do not otherwise see for themselves any future ahead. On the other hand, the mainstream media goes the whole hog to project them as little Davids trying to take on the mighty Goliath, the State.

Unfortunately, the dissenters are not alone in their target practice at the State symbols. There is no dearth of academics, artists and intelligentsia waiting to come out in the open not only to defend the dissenters who go over the bend but also in support of their hate speeches. The nationalist forces, which are aghast by the distressing situation and condemn it as anti-national, are dubbed regressive and anti-democratic! Thus, the anti-national elements are determined to twist the traditional interpretation of the concepts of nationalism and patriotism beyond recognition to suit their nefarious purposes. Evidently, this is a case of the devil quoting from the scriptures!

Last year, the mainstream television channel NDTV India managed to get away from being shut down for helping out the enemy country. Its anchors and reporters were charged with highly objectionable reportage that put our Armed Forces in a precarious situation that could have turned perilous, by giving away their whereabouts and the locations of their installations. The channel had also been found guilty of leaking out the details of the manoeuvres of the security agencies trying to thwart the Mumbai massacre of November 2008 carried out by Pakistani terrorists who had infiltrated into India, with its blow by blow account.

Barkha Dutt, one of the anchors associated with this channel, does not hide her sympathy for the terrorists in Kashmir and their paymasters across the border. After Jamaat-ud Dawah chief Hafiz Saeed effusively praised her last year, some people have even started suspecting that she has some kind of links with this Pakistani terrorist and Mumbai terror attack mastermind.

Now, the million-dollar question is: How far can the freedom of expression be stretched without harming or hurting our nation’s territorial integrity or wounding the national pride? Should the journalist’s licence to function in an atmosphere of fearlessness be allowed to entail the luxury of the mainstream media being accountable to no authority, while the same degree of freedom to function is denied to the Indian Army, which is trying hard to keep intact our nation’s territorial integrity? Granted that the pen is mightier than the sword, but non-accountability should not be used as a fig leaf to cover the honour of the MSM that is bent upon doing a full Monty!

In short, the mainstream media should most definitely be made accountable for its unrestrained conduct and licentious behaviour in the interests of the nation and for keeping up the morale of its various agencies and organs that are often given a short shrift by the MSM. Else the intended purpose of the founding fathers of our nation in allowing the Media to function unhindered and unhampered by restrictions and curbs imposed by a totalitarian State would be lost. So would be the territorial integrity of the nation and its ability to curb the fissiparous tendencies let loose by anti-national forces through the tacit support of sections of the mainstream media, trying to cash in on their unbridled freedom of expression.

While it may help to carry out a comparative study of the freedom enjoyed by the MSM in other democratic countries, no useful purpose would be served by trying to ape the system of any country that provides its mainstream media blanket freedom. In this age and times of international terrorism and proxy war, a review of the situation concerning the Media is very much in the fitness of things. The government, both at the Centre and in the states, major political parties recognised by the Election Commission, the Press Council, representatives of different components of the Media, academics, intelligentsia, legal experts and all other stakeholders should be involved in the review exercise.

Without letting the exercise to be bogged down by the nitty gritty or time consuming and meandering procedures, a consensus should be allowed to evolve. The MSM should ideally come up with self imposed restrictions to complement the outcome of the review. Great care would be required to ensure that the spirit and purpose of the controls should not be lost in their details or non-viability. While aiming for a perfect regime of controls, we should be prepared to be contended with near perfection. The bottom line should, in any case, be that the Media is neither placed under the state control nor allowed to stray into the stratosphere of total non-accountability.

91 thoughts on “Should Media be Made Accountable to Safeguard National Interests?”