The modern Indian universities may be characterised as the training fields of those scholars whose ambition for the future lies in a career in politics rather than in spheres related to academics. 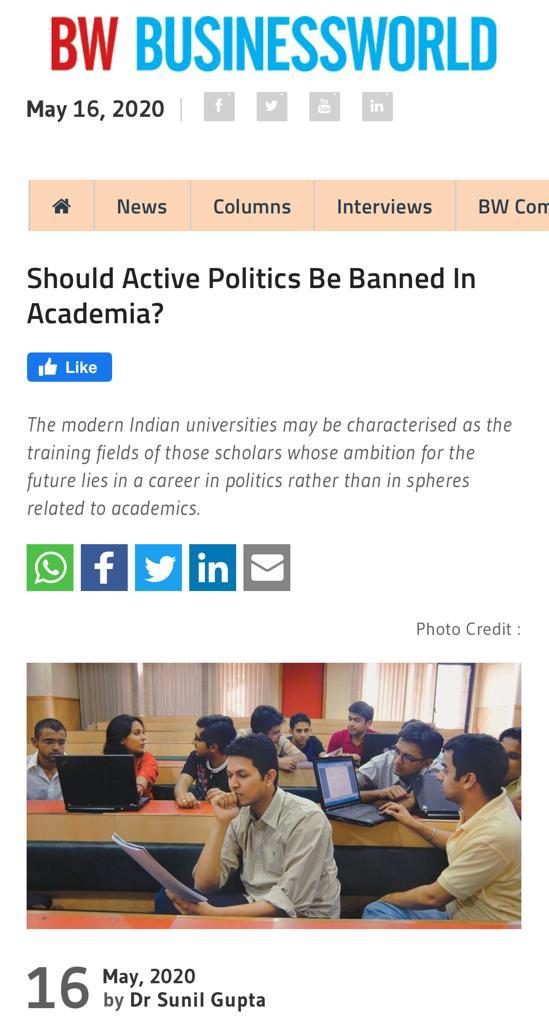 Universities are no new phenomenon in post-Independence India. Throughout its chequered history, India had been known for its seats of higher learning such as Nalanda and Takshashila, where a wide spectrum of subjects, ranging from Buddhism to Vedas, Philosophy, Grammar, Logic, Metaphysics, Medicine and Astronomy, was taught. There was a truly secular spirit of imparting and imbibing of knowledge. These universities offered plenty of scope for an exchange of thoughts and ideas between the teachers and the students, and also had fora for debates and discussions on religious and secular subjects. The students had different religious and cultural backgrounds, and they hailed from several countries.

They had access to an ample sphere of knowledge and vast field of reference – classrooms, well-stocked libraries and a broad spectrum of cultural ambassadors who constituted the scholars. The resultant milieu was an impressive juxtaposition of a rainbow of ideas that contributed to a unique cultural mosaic. And yet, these institutions remained just educational, absolutely free from all kinds of socio-political irritants that was capable of marring the academic environment. In today’s context, it would be very pertinent to state about these universities that they truly practised social distancing from contentious political activism.

These centres of academic excellence started declining in quality and importance when their premises were torched and scholars attacked by alien invaders. There was a disquieting interregnum of void in the continuance of institutions that imparted higher learning and Indian studies under the country’s occupation by Islamic rulers and European colonisers. In the changing environment, the society was torn asunder by a conflict between the aggressive and proselytising alien religions on the one hand and the Indian culture that had flourished under the benevolent and secular Sanatana Dharma on the other. It was an uneven fight, heavily loaded against the latter. The frenetic bid by the educational institutions to stay truthful to the secular Indian ethos and culture was a lost cause.

After India obtained Independence, unfortunately for its people, the powers that be at the Centre commissioned a set of historians known for their proclivity to the Mughal and British rulers, to write the history books taught in schools and colleges. These historians made fleeting references, at best, to the brave Indian kings who had fearlessly fought the invading armies. This was a despicable act of treachery not only against the brave Indian men and women who had courageously fought to defend their motherland but also against Indian nationalism, which was sought to be obliterated by the alien invaders.

Additionally, bad foreign policy decisions and failure on the defence front led to multiple wars with neighbouring countries in which our government ceded swathes of territories to the enemy. After 60 plus years of freedom, the nation’s economy was far from satisfactory. Scams and scandals at high places rocked the nation. All this resulted in a loss of face for the nationalists who were hoping during the freedom struggle that Independence and self-rule would usher in prosperous times ahead for the nation. Much to their dismay, the minority religious groups were pampered with special concessions and privileges at the cost of Hindus, who are the original inhabitants of this nation.

Vote bank politics became the norm of the day and the chosen plank of electoral politics in the hands of unprincipled political parties. One of the primary concessions granted by the self-serving politicians to the minority religious groups was the right to run their own schools in which the respective religion of the groups was taught, and Hinduism spiked in the process. Hinduism was hampered and disabled from being taught in schools in the name of Secularism. This led to a situation that was in sharp contrast with the happy state of affairs which prevailed in the ancient Indian universities.

The modern Indian universities may be characterised as the training fields of those scholars whose ambition for the future lies in a career in politics rather than in spheres related to academics. Such scholars and like-minded members of the faculty join forces with political parties fully involved in electoral politics. These elements seldom talk of a proactive role for themselves in nation-building. Instead, they come to the fore whenever some acts or events of perceived injustice incite them. Then they resort to agitations against the establishment.

Two such instances were over the execution of Afzal Guru and Yakub Memon, both of whom were proven terrorists convicted by the Supreme Court. Protests broke out in Jawaharlal Nehru University and Hyderabad University over their hanging. Apparently, the protesting groups thought they knew better than the apex court of our country! In the JNU protests over the hanging of Afzal Guru, a students group tried to carry out a protest march despite the cancellation of permission granted earlier by the university authorities. They were opposed by another students group which attempted to thwart the rally. Ugly scenes ensued. Outsiders who were neither students nor had anything to do with the varsity were spotted at the march.

Furthermore, inflammatory speeches were made, break-India slogans, as well as statements praising the terrorists, were raised and Pakistani flags waved. Protesting student leaders were arrested by the Police and cases invoking sedition laws filed. Such student leaders were and continue to be given undue prominence and publicity by the meddlesome media. All the unwarranted attention and media glare make these student leaders readily abandon their academic career in a bid to carve out a lucrative career in politics with the blessings of a bunch of political parties known for their suspicious bonafides in the context of national integrity and clean politics. On the occasion of every national and state election, such student leaders are seen campaigning against the ruling party.

When protests broke out recently against the legislation of the Citizenship Amendment Act (CAA), both JNU and AMU became hotbeds of trouble into which dissenting students and faculty members threw themselves headlong with gusto. There were unsavoury scenes created by protestors who resorted to violence both within and outside the varsity premises, thereby necessitating police action against them. The protesting students knowingly or unknowingly became a party to a larger design by some failed and disgruntled political parties in the Opposition, which want to disrupt orderly public life and hurt national interests. The student leaders allowed themselves to play into the hands of these political parties which function as handmaids of the nation’s enemy countries and jihadi elements.

Inflammatory speeches, anti-national slogans and insults heaped on the symbols of our country’s honour and integrity such as the national flag and national anthem on the varsity premises are highly despicable. The sanctity of the universities should not be allowed to be sullied or degraded for any reason whatsoever. Universities should not be permitted to become hotbeds of anti-national activities. Furthermore, as political activities vitiate the atmosphere of learning by serious-minded scholars, active politics on the university premises must be summarily banned. Only such strict measures will help reclaim their sanctity as centres of higher education and academic excellence.

(The article “Should Active Politics Be Banned In Academia?” published in “Business World”)

10 thoughts on “Should Active Politics Be Banned In Academia?”