Democracy will not be allowed to degenerate into anarchy by the determined people and the Government of India. 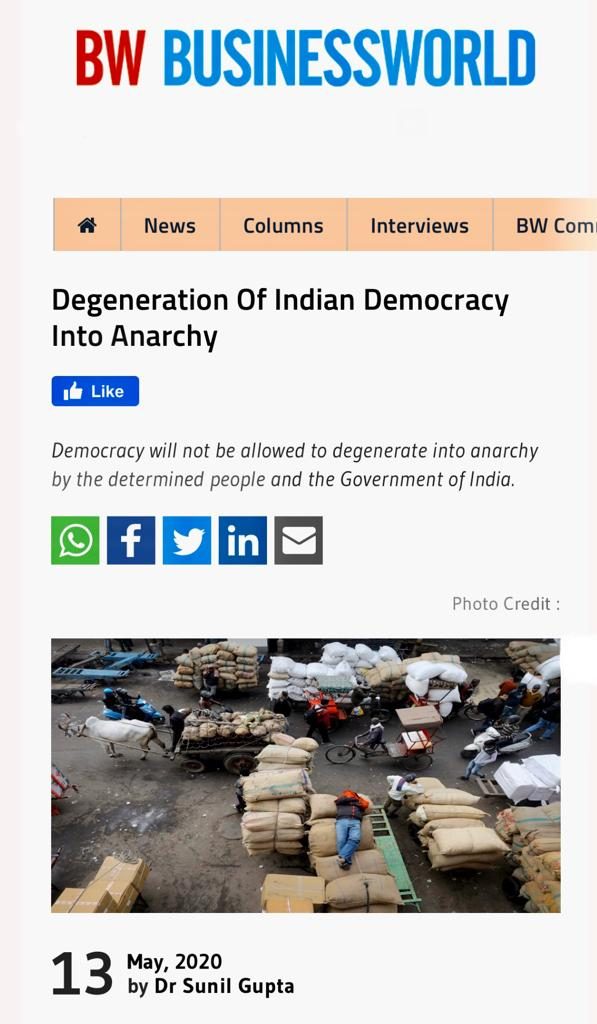 In a cruel twist of history, Indian Independence did not bring in its wake freedom from a prolonged sense of slavery and subjugation. What resulted at the end of a century-old back-to-back rule by bloodthirsty warlords from the Arabian and Central Asian wastelands void of culture, and European colonial rulers with a loot-and-exploit agenda was a badly-battered social and cultural fabric that cried for urgent tending. In reality, what awaited the nation was supreme indifference on the part of a smug political dispensation to the need for rejuvenation of the collective psyche of the society that had plummeted to the bottom of the pit of despondency.

People had lost their temples in the thousands as well as unquantifiable cultural treasure during alien invasions and were languishing in a mood of spiritual despair. Instead of being administered a soothing balm of solace and succour, they were told by their new masters that the factories and dams that were being built in modern India were their new houses of worship. This was, in essence, a signal from the powers that be that it was futile for the people to wistfully look back in time and hanker after their rich spiritual and cultural past.

They should, instead, brace for a sterile future marked by a materialistic and corporeal climate of development. Furthermore, the curious case of the Westminster style parliamentary democracy wedded to the Soviet-style Socialism was sold to the people as a sure-fire formula of success needed by our nascent Republic. The subsequent fiasco of Socialism vis-a-vis realpolitik in a world of geopolitical tectonic shifts proved that the political successors of the bygone colonial masters had grievously erred in the task of rebuilding the nation.

State Fails People
What had evidently been overlooked was the historical truth that the princely states and territories of the pre-Independence India had remained united by a common chord of religion and culture even before they were strung together to form the modern Indian nation. It was this unique factor which had been the underpinning of the credo of unity in diversity that was gloated over by practically every Indian politician worth his salt. What was the contribution of the State to sustain the common factor of religion and culture? Zilch.

People from all over modern Indian state and beyond in the landmasses that had earlier formed part of Akhand Bharat of the past had been getting together and congregating from time to time in the name of the unifying force of the timeless Dharma symbolised by the temples. This was equally true for the ones that were destroyed by the alien invaders as well as the others that survived the onslaught.

The modern Indian state did not, however, deem it fit to take pro-active steps to strengthen this unifying force of our divergent society. Nor did it facilitate the task of the resurrection of the destroyed temples by the Hindu community on its own without the state’s participation or intervention, by mobilising its own resources. On the other hand, the State only impeded the majority Hindu community’s claim of its due space in the social and cultural domain aimed at reclaiming its past glory.

Pandering to the Minority

Successive governments pandered to the minority communities and turned their back on the majority Hindus. All this happened in the name of Secularism, which was added to the Constitution as an afterthought in the 1970s by the then Congress government under Indira Gandhi. The Hindu community’s inability to resist the machinations of the unprincipled and power-hungry political parties that camouflaged themselves under Secularism caused it a loss of more and more political ground and clout. This development gave way to more and more assertion and dominance by the minority communities both at the macro and micro level politics of the country.
They enjoyed privileges and benefits in the form of subsidies, personal law, right to run educational institutions, etc. Another factor that tilted the balance in favour of the minority communities was the freedom of propagation of  religion which has often ended up being misused for the conversion of people to the minority communities by dubious means. Since Hinduism hardly affords any scope for conversion to its fold, the freedom to propagate religion is a redundant and meaningless exercise for the Hindus.

Pseudo-Secularism
In such a heavily overloaded political atmosphere, pseudo-Secularism practised by successive pro-minority governments that had preceded the Narendra Modi-led National Democratic Alliance (NDA) government, ruled the roost. The hardcore elements of the minority communities with a hidden political agenda just got more and more emboldened to the point of dictating terms to political parties and through them the government of the day.

With the ascension of the Bharatiya Janata Party (BJP) at the Centre, these elements started feeling threatened. The political and social reform measures ushered in by the BJP, such as the abrogation of Articles 370 and 35A of the Constitution, abolition of the abominable medieval practice of Triple Talaq, introduction of the Citizenship Amendment Act (CAA), etc and the active role of the government in ending the Ramjanmabhoomi legal dispute, dealt a series of blows to the misplaced sense of superiority assumed by the hawkish minority elements.

Unholy Alliance
Besides losing much of their political power and clout, for the first time, the clergy and other hardcore minority religious elements faced the prospects of losing their hold over their flock. Furthermore, it was becoming more and more difficult for them to incite and radicalise their naive and gullible followers in the face of the government’s awareness campaign. In their tirade against a progressive government, they found allies in the jihadi elements infiltrating into the country from across the border, urban Naxals and other break-India forces.

We Shall Overcome
The recent anti-CAA protests launched by the minority communities with the abetment of the disgruntled Opposition parties are a glaring example of an ongoing bid to subvert the political system by anti-national elements. These protests were orchestrated to undermine the upbeat mood of the nation and thwart the resurgence of nationalism. Religion was pitted against inclusive growth and development, which is the hallmark of the current political ideology that has triumphantly come to the fore in the nation’s struggle against pseudo-Secular and divisive forces.

Women and children were introduced as frontline soldiers in the protests that degenerated into flashpoints of communal riots. When humanity is struggling hard to come to grips with an existential crisis following the outbreak of Covid-19 pandemic, communal groups with a medieval mindset are engrossed in desperate attempts to derail our Union government’s valiant bid to defuse the crisis. There is an attempt by the unholy alliance of anti-India forces to aggravate the crisis and turn it into an opportunity to strike at the territorial integrity of our nation by dividing the people on communal lines.

Nothing could be more reprehensible and alarming. Our nation is currently fighting the double whammy of the Covid-19 outbreak as well as the enemies of the State. However, we have every reason to be optimistic as India has the capability, resources and the political will to overcome the challenge and emerge stronger. Democracy will not be allowed to degenerate into anarchy by the determined people and the Government of India.

11 thoughts on “Degeneration Of Indian Democracy Into Anarchy”