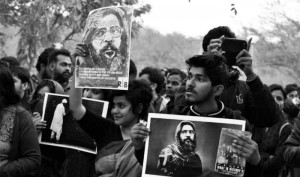 Unfettered freedom is a myth. It is an illusion created by vested interests for their own selfish gains. It cannot sustain, as unregulated freedom is a recipe for total disaster. Those who demand it are either totally ignorant or have hidden motives. There is no absolute freedom of expression anywhere in the world. Even animals do follow unwritten rules in the jungles, which govern their code of conduct.

Freedom of expression is one of the crucial elements of democracy and civil liberties. In India, we have reached this enviable position after lots of struggles, conflicts, trials, and tribulations. So, naturally, we value our freedom of expression and democracy very much. We cannot afford to lose it in the hands of a few miscreants who misguide a small section of the population to tarnish the image of the country.

It is a fact that freedom and democracy must be safeguarded at any cost. The public knows that nothing comes for free. If we value our independence, and if we want to sustain it, then surely there is a price to pay. So, if some necessary code of conduct has to be introduced, we the public are sensible enough to understand that it is for the good of the country and to keep our freedom intact. They will be happy to pay that small price to protect the big prize, which is democratic freedom.

Patriotism has a vital role in democracy and nation-building. Any love, including the love for one’s mother, has to be demonstrated adequately. Otherwise, it will not reap the desired results. Parents have to convince their children that they are precious and loved. Lovers have to mutually tell how much they value each other’s companionship and proximity. The degrees could vary, but it is necessary to display your emotions for proper nourishment and growth. Similarly, if you love your country, you need to express it openly. Else, those sentiments wither away gradually, leading to the disintegration of the nation.

If citizens receive the protection of the state, and if they value the security that comes with the idea of a strong and powerful nation, then they are duty-bound to reciprocate. They need to exhibit their patriotism and salute the concept of nationhood in order to make it stronger. Those who are patriotic will never ask for any unfettered freedom of expression.

When we talk about patriotism, it is imperative to understand that there is a difference between patriotism and nationalism. Patriotism is the love of a country and solidarity with fellow nationals. But nationalism assumes a more rigid stance. It is uncritical and blind acceptance of state and political authorities, and rejection of dissent and all forms of criticisms.

There is a school of thought that patriotism can exist without nationalism. For instance, a patriot does not think twice about showing his respect towards the country’s flag, national anthem and other national symbols like our armed forces. But a nationalist will seek to go further and will insist that no one should criticize anything that comes from the authorities.

Sensible criticism is necessary for a healthy democracy to survive and disagreement is an essential element of democracy. Currently, there are certain segments of the society which seem to think that countering anything and everything that comes from the government is a necessary requisite to establish their own credentials. They do not care about the subject matter. What matters to them is who said it. If the comment happens to come from the BJP, they will like to oppose it irrespective of whether it is valid or not. That attitude seems to be their notion of freedom.

The current generation has the liberty to do anything, say anything, go anywhere, to be with anyone. The problem is that when one has all the freedoms, one does not know what to choose. And their right to choose does not give them any satisfaction. They take it for granted, and they need more to find fulfillment. In their quest to be different and relevant, they seek to enter uncharted territories. For them, compliance is uncool, and dissent is the fashion. Inadequate intelligence and lack of wisdom prevent them from finding sensible areas of activities, and they turn to easy targets to get noticed.

To feel important, they choose names such as “liberals,” “intelligentsia” or “leftists.” As they cannot think of any real issues, and out of the craving for public attention, they pick up some silly cause. They decry our age-old practices like pujas at temples. They pour out venom on our Gods. They attack our national symbols like the flag and disrespect our national anthem. Such misguided people support the freedom of murderers, terrorists, and separatists. They seek the breakup of India and ignore the agony and misery of the victims of extremism and separatism.

Freedom without bounds could lead to anarchy. Article 19 (1) of the Indian Constitution provides citizens with the right to free movement anywhere in the country. But no sensible person will argue that they can drive anywhere and stop anywhere. Just imagine what could happen if, in the name of freedom of movement, all motorists decide to drive in whatever direction they choose and park their vehicles wherever they want especially in the middle of the road.  It will be total chaos. There will be anarchy, violence and finally an absolute standstill. There will be a complete breakdown of law and order, and people will get killed.

Hence, our freedom is subject to certain restrictions to ensure that our “rights” do not lead to “denial of rights” to some others. Statesmen have always argued that the State can impose “reasonable restrictions” on the freedom of movement “in the interest of the general public”. Freedom of speech also comes in the same domain and need certain restrictive clauses. Right to free speech does not give a person the power to hurt someone else’s sentiments. Fundamental rights do not mean the right to disrespect or insult everything, including the national flag or the national anthem.

The so-called leftists use their freedom to hurt the sentiments of the majority community, by cooking and distributing beef. However, they ensure that the beef is slaughtered the “halal” way to make sure that they do not lose the support of certain minorities. These protagonists of total freedom are very selective in exercising their “freedom.” Will they dare to slaughter a pig and distribute its meat in Muslim majority areas of Old Delhi or Hyderabad? The examples of ‘discriminative freedom practices’ by our “left liberals” are too many to be listed here.

Freedom and democracy need certain prerequisites to be successful. Too much freedom too early can be catastrophic. There are many examples in the world, mainly in Africa, to show that. Closer home, Pakistan is one such example. It got freedom, but its people were not ready for that or didn’t deserve that kind of freedom. So, within no time the power was appropriated by the armed forces. In subsequent years, the baton was switched between the military and the civilians frequently. India has so far managed to stay away from instability or autocracy except for a brief period of emergency by Indira Gandhi during 1975-77, spanning 21 months.

We know that opportunities and obligations are two sides of the same coin. Plainly stated, people can and should have only as much personal freedom as they are willing to take responsibility for. One should exercise one’s liberties only to the extent that they do not hinder someone else’s sentiments or freedom. Just like we manage and safeguard our house and properties, we can, and we should be able to handle our mind and tongue to make sure that they cause no harm to others. Whenever that doesn’t happen, the state and the law of the land will have to step in. The law is forced to intervene only when individuals are unmindful of hurting others, and they tend to misuse their freedom through words or deeds.

In such cases, it is evident that an attempt to control or regulate something is not equivalent to curbing personal freedom. For instance, current Vice President of India and the then Union Minister, Venkaiah Naidu, said in March this year that the government cannot accept chants like “Bastar mange aazadi” or “Kashmir mange aazadi”. He was referring to sloganeering in certain educational institutions including the Jawaharlal Nehru University and Ramjas College in Delhi. He implied that it is the responsibility of the state to see that unlimited freedom doesn’t lead the nation to anarchy.

Here, it needs to be reiterated that every freedom carries with it a corresponding responsibility and can never be distanced from liabilities. Regulations, including guidelines on how to salute our country’s flag and respect our national symbols, are necessary to ensure that we continue to enjoy the freedom we currently take for granted. Undoubtedly, freedom is a fundamental right to have, and must be safeguarded. Yet, some curbs can be put in practice when it is a choice between individual freedom and the wellbeing of the nation. Unfettered freedom of expression is not an alternative to patriotism. We need to control the former to sustain the latter.

95 thoughts on “Is Unfettered Freedom of Expression an Alternative to Patriotism?”