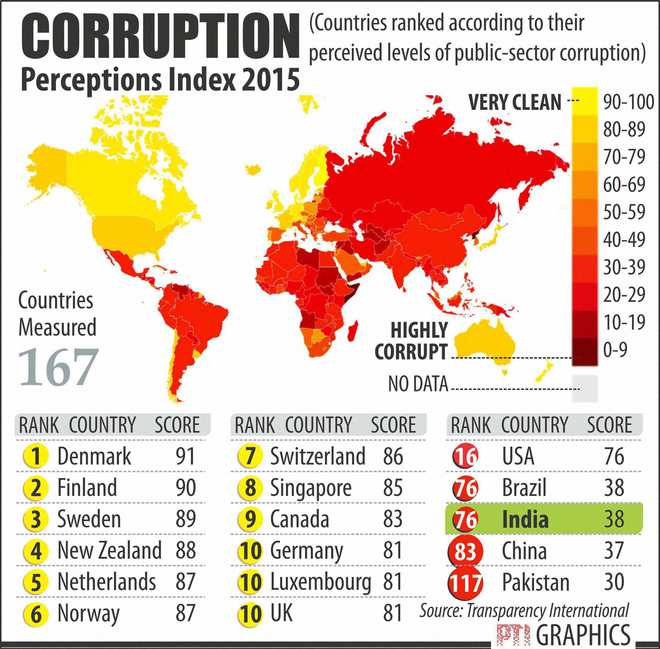 Corruption in India is a multi-headed monster, which has been shored up as much by greed and dishonesty as it is by illiteracy and lack of awareness. Making India a corruption-free country is no overnight project, because it has to be a war fought on many fronts and battlegrounds. However, it is undoubtedly a war that we need to win, because corruption distorts resource allocation and makes a mockery of India’s democracy and independence by denying equal rights to all and by diverting taxpayers’ money from public use into private pockets.

From increasing deterrence and cures for this malady by escalating transparency in transactions, to effecting social change through awareness campaigns and gradual social engineering, the war against corruption in India would be time-consuming and messy. But to enable the Indian citizens to truly claim their rights and make them feel inclined to carry out their duties, the disease of corruption has to be eliminated.

Corruption in its most pervasive form destroys the faith of citizens in the institutions of state and democracy and alienates them from the government. On the flip side, a government alienated from the grassroots becomes vulnerable to forces of corruption. Thus, corruption establishes a self-sustaining system, a Gordian knot, which is difficult to untangle and requires to be slashed through by drastic measures like demonetization.

Transparency International, the global anti-corruption coalition, defines corruption as “the misuse of public office for private gain.” In India, corruption flourishes via two routes – bribery, wherein private entities willingly make payments to derive unfair advantages and benefits; and extortion, wherein citizens do not get access to rights unless they pay up.

Again, corruption in India is most noticeable at three levels – petty, systemic and grand. At the level of petty corruption, we find government employees and public servants who depend on small bribes to supplement their income – for instance, a traffic police pulling up a truck for no reason.

Similarly, at the level of systemic corruption, we find petty corruption converging to create established channels that extend upwards from the bribe collection points – from check-posts to ministers and from liquor dens to police commissioners, with middlemen structured across a hierarchy. These are the cartels that back, propagate, and perpetuate the hafta system and the kind of corruption that attracts anti-social elements and worshippers of violence.

Then there’s the grand corruption where politicians and top administrative cadre take decisions involving large public contracts or projects with money or assets meant for development channeled to individual pockets – these range from municipal road contracts to helicopter scams.

There’s more, like passing rules or ordinances, or even laws to make it difficult for a targeted section to earn a livelihood or continue in their way of life or doing things – done in the name of public good – but actually to create opportunities for further systemic corruption. This is grand systemic corruption, a hallmark of corrupted political parties.

So, how to take care of all these? Thankfully, technological innovations provide us with some measures that may act together to form the sword to cut the Gordian knot of corruption in India. The current NDA government at the Centre is already acting, and opponents are foaming at the mouth. What is now needed is public support for the Centre’s demonetization move and other such initiatives, which may not be perfect in themselves, but will go a long way in slowly throttling corruption in the country.

Some more steps that India needs to take to emerge as a corruption-free country include the following:

Such a list of measures can be endless because the corrupt will always strive to find a way around. But the measures and principles mentioned here, if they can be implemented would significantly reduce corruption. The good news is that the Narendra Modi-led government at the Centre is already working on some of these fronts. The bad news is of inept people opposing their implementation and a corrupt Opposition trying to block every positive move that can reduce burdens of multiple compliances and neutralized corruption across a broad swath.

Before ending this article, I would like to emphasize that every corrupt transaction requires a ‘buyer’ and a ‘seller’. Furthermore, it might be the responsibility of the government to deal with corrupt civil servants, but we as individuals and businesspersons have the responsibility to expose such corrupt officials.

Furthermore, we should all strive to ensure that we don’t participate or promote corruption willingly or unwillingly, directly or indirectly. While such a statement may seem too lofty and idealistic, the fact is that only social peer pressure can help to change things. The power of social media cannot be underrated and the way stings have exposed the guilty is something unprecedented in the country.

As long as communities, villages, towns and cities bestow respect on those wallowing in ill-gotten wealth, no changes in law or system can make India a corruption-free country. Mind you, involvement of voters is essential, because, despite effective measures put in place to battle corruption, the lack of political commitment and resources, whether of a ruling party or its Opposition can seriously undermine all anti-corruption efforts.

When a move or measure is clearly against corruption and for the common good, political parties need to set aside their differences and join hands – or be exposed, and the electorate needs to take away the power of political miscreants. People are to shed their lust for pity perks offered by corrupt politicians during elections as they cripple the society and economy in the long-run. Finally, the corrupt have to be voted out from all levels, because without the electorate’s mandate against pro-corruption forces, removal of corruption will always remain beyond our reach.

After the positive response to demonetisation of high currency notes, backed by a thought that the PM is out to eradicate corruption and black money no matter how influential may be the person at the receiving end of this move, the public awaits amendment to law that allows anonymous donations to political parties if the amount is more than Rs. 20,000. Once debated, the opposition will have no other option than to clear this amendment since public sentiments are highly in favour of measures that cleanse the economy.

Finally, we should always remember that no party in power or no individual in authority can fight corruption without the help and support of the citizenry. To contain, curb, or eradicate corruption, we Indians should assert our rights. We should neither keep ourselves aloof nor fear the powers of systemic corruption. Furthermore, we should never assume the role of a neutral party in any fight against corruption as that would only empower the corrupt elements and may help corruption win the day.

88 thoughts on “How Can India Emerge as a Corruption-Free Country?”