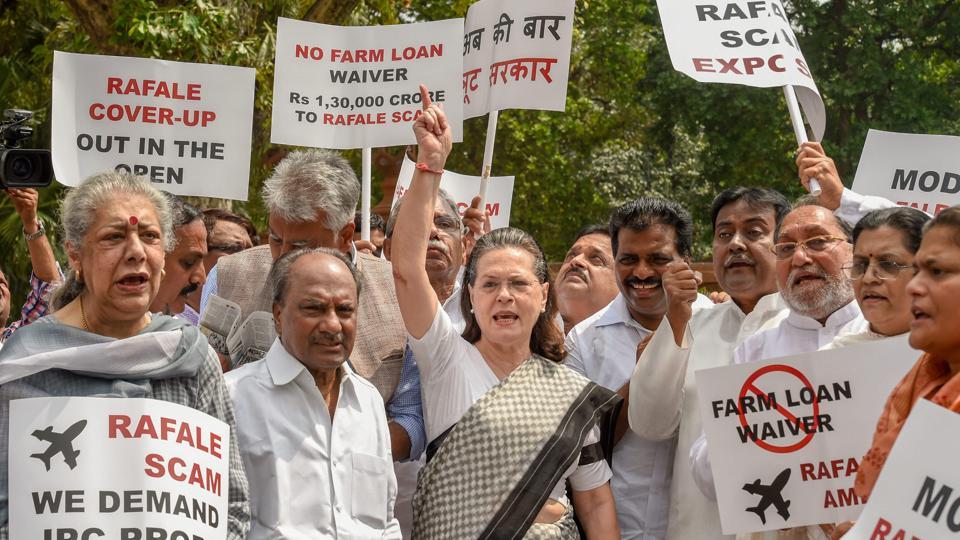 During the last five-year rule of the National Democratic Alliance (NDA), the churning that happened in Indian politics enabled the Opposition to throw up a spot-the-thief-where-there-is-no-theft strategy. It was based on falsehood and aimed at spiking a great trail that marked the NDA reign. The landmark strategy set the ground for the evolution of the spit-and-scoot tactics aimed at maligning the most spotless of the reputations. In the post-2014 scenario, the continued absence of scams and scandals on the part of the government had rendered the Opposition desperate and the Media nervous.

The government showed no signs of a let-up on its avowed policy of clean governance, nor did the ruling coalition exhibit any sign of cracking up. The single instance of the pulling out of the government by a peevish Telugu Desam Party was no more than a classic case of a single swallow that does not a summer make. With its inability to set a narrative of its own, the Opposition had been reduced to a sorry state of marginal presence. Bereft of grist for its gossip mill, the mainstream media (MSM) found, to its dismay, the drying up of the fountainhead of sensationalism. In short, it was not business as usual any more either for the Opposition or for the MSM.

It was at such a juncture of the downturn of events that the Opposition went for a huddle and came up with a formula for gaining political relevance. The strategy gave the Opposition the raison d’être, and the tactics gave the strategy the wings. Primary among the proponents of the formula was the Congress Party, whose high priest, Rahul Gandhi, lost no time to shoot from the hip. The party did not have to look far to spot a potential area for a scam. Having for long been in the eye of numerous scandals and scams while in power, Congress saw a windfall opportunity in the India-France deal for the procurement of fighter jets for IAF.

Had not the nation witnessed during the Congress rule, right from Jawaharlal Nehru’s time down to that of Manmohan Singh, some scam or the other in the area of Defence purchases? The Bofors scam still etched fresh in their memory, why should it take long for the people to be persuaded to believe that no Defence deal was corruption-free or, for that matter, no government was scandal-free? However, since the Prime Minister and his ministerial colleagues had all along steered clear of corruption charges, the name of an industrialist, supposedly a so-called ‘corporate crony’ and promoter of the Prime Minister’s image, was thrown in to make the plot thicker.

Thief but No Theft

Accusations were hurled and allegations levelled against the PM, his cabinet colleagues, and the ‘corporate crony’. The involvement of a French angle in a murky affair was not spared either. The ‘scam’ was at the heart of all the events of the Opposition, be it a road show, street corner meeting or press meet. The government squarely rebutted all the charges and vehemently ruled out any impropriety, financial, political or administrative. The decibel level of the high priest of Congress went up higher and higher, and the ethical quotient of the attack on the PM lower and lower. The PM was flagrantly branded a thief who allegedly stole thousands of crores of public money and gave it away to his ‘corporate crony’. Interestingly, the amount of money supposedly stolen from the public, drastically varied in quantum from one public meeting to another, depending on the perceived need of the moment to produce a shock and awe effect on a stupefied audience who had no clue about what was being said.

Without prejudice to the intelligence of the rural and small-town audience who attended such meetings, what registered in their mind in the scorching heat of a hot summer day under the open sky was, in all probability, “Chowkidar chor hai.” Nothing more! It was evident from the beginning that the issue was baseless, with no proof or evidence. Congress, however, went about claiming that the onus of proving not guilty was on the Prime Minister. Very convenient, indeed!

In response to a PIL filed by some disgruntled ex-members of BJP and their associates, the Supreme Court found no corruption, foul play or impropriety in the Rafael deal. The CAG report further reaffirmed a clean deal. All this was not enough to deter the high priest of Congress from slinging more and more mud on the government. Referring to a Supreme Court verdict on a review petition, he brazenly went ahead to claim that the apex court had conceded that the PM was a thief. Rahul Gandhi had to subsequently tender an unconditional apology to the court, but he did it only after the honourable court warned him of strict action.

Now he restricts himself to saying in public meetings “Chowkidar” and prompts the audience to shout “Chor Hai”. Whether his behaviour qualifies to be termed childish or churlish is a moot point. He has also gone ahead to state on camera that he has no details in his possession regarding the Rafael deal! Furthermore, he has no qualms about conceding that his attack on Narendra Modi was aimed at tarnishing the latter’s clean image and reputation of spotless personal integrity. In short, anything to bring down one’s opponent from the podium of public recognition for one’s own self-promotion! What could be viler or horrendously unacceptable than such a sinister display of contempt for decency, decorum, and integrity in public life, especially on the part of one aspiring to become the Prime Minister?

In an up and coming nation like India, where there are severe constraints on the people’s accessibility to unvarnished truth, with paid sections of the MSM hacking the public opinion with misinterpretations, half-truths and plain falsehood, the price that the honest political leaders have to pay to vindicate their honesty and integrity is quite daunting, to say the least. However, when mealy-mouthed politicians gang up for their selfish agenda and cause the derailment of truth, it is the nation which suffers the most. A wrong person at the right place, surrounded by evil geniuses and conniving henchmen, could cause irreparable harm to the development of the nation by taking its economy several decades back, a severe beating to communal harmony, loss of faith in the people in democracy and territorial integrity.

After all, it is rightly said that power corrupts and absolute power corrupts absolutely. No amount of precaution is too much to take, nor is the time for action too soon. Politicians should be made accountable for their words and deeds, especially outside the Parliament, which provides them with a reasonable degree of freedom of expression, free of the fear of retribution. Their conduct outside the Legislature needs to be restrained too. Victory in an election is neither a licence for the politician to put himself above the nation or its citizens nor is an electoral debacle an adequate punishment for all his sins.