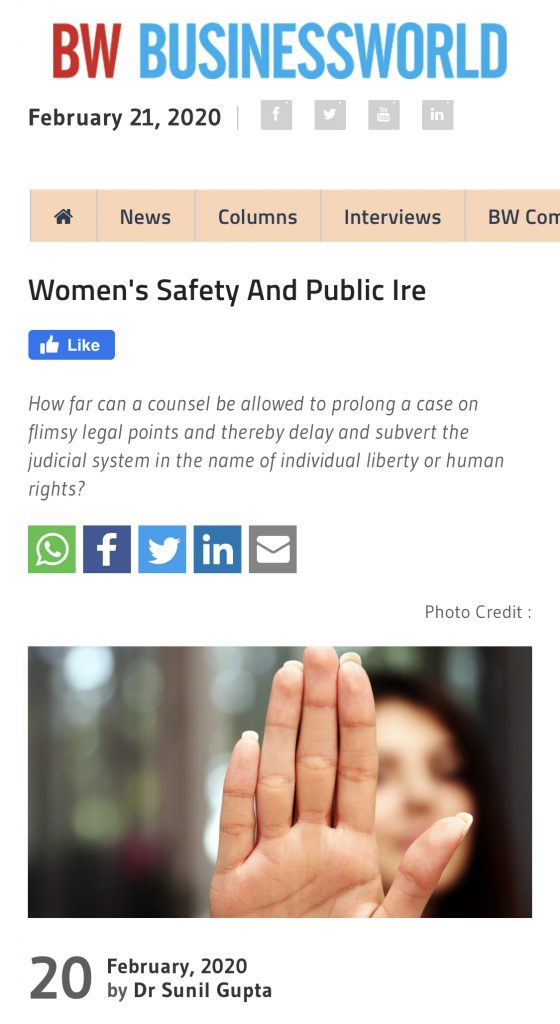 Hardly passes a day when you sit down with a hot cup of coffee in hand in the morning to read the newspaper and don’t find the headlines screaming at you about the horrid rape of a woman. A detailed account of the gory details of the sordid act is given to make your stomach churn in revulsion. The extent to which some guys could go to violate a woman’s body in every which imaginable way and, more often than not, leave her dead body behind like a heap of rubbish shocks you and makes you tremble with rage.

You then move on to catch up with the rest of the news, much of which turns out to be practically a repeat account of the same, page after page. If you don’t read the newspaper, you still get to hear about the ghastly incidents either on the TV on return home or on your car radio while on the way to work. This experience, revisited day after day, leaves you numb with a sick feeling of morbidity and helplessness. What do you do? Leave the question of women’s safety at the doorstep of the already-overworked-authorities hamstrung by scarce resources to handle the situation, like an abandoned baby?

No man is an island except metaphorically. He shares precious space, time and resources with woman on equal footing. His empathy for woman flows from the special space she occupies in his life. A world without woman is neither feasible nor thinkable. Woman’s safety is, therefore, a subject close to everyone’s heart. This is more so with the government in a civilised country like India that lays premium on woman’s safety, which is an inextricable part of human rights. What the government does for the general welfare of the woman and all its attempts to empower her doesn’t seem to add up to much when it comes to safeguarding her from the clutches of the evil forces amidst us.

Every right-thinking woman considers herself equal to man in the use of cerebral power that fuels the use of her faculties for the betterment of her own self and the society. All she expects in return is recognition of her capability and ability as an equal stakeholder, along with man, in the making of the world a better place to live in. It is, therefore, hardly surprising that no discrimination against women is factored in by the Constitution of any modern government in today’s world. Nevertheless, the basic question of ensuring her safety poses to the government too big a task fraught with prickly issues of human behaviour.

Practically every young lady, who has equipped herself with a decent education and a talent or two and the skills necessary to support herself and her family, finds herself in a quandary. She finds the need to safeguard herself against the potential rapist lurking around the corner too intimidating a burden on her gender. Is rape a cross which a woman should be prepared to carry throughout her life? This is a question that weighs heavy on the mind of every woman. Being stalked, harassed, raped or murdered is a spectre that haunts her at every stage of life.

All this leads to the silent rage and frustration about the limitations of the system, which in turn has the potential to snowball and explode at some point of time into vociferous public outrage. This inevitable phenomenon is highlighted by candlelight marches and protest demonstrations in city after city aimed at the growing incidents of violence against woman. That the statistics of crimes against women in several other countries in the Western hemisphere far surpass the happenings in India doesn’t mitigate the public fury. The need of the hour is for all stakeholders to realise that the prevailing situation should not be allowed to deteriorate any further.

Furthermore, everything must be done by the State and the citizens to arrest the trend and reverse it. No price is indeed too high to achieve this end goal. Having said it, we must not fail to realise that there is only so much that a government can do to protect a woman. Currently, the onus of being prepared for the worst and taking precautions to prevent it from happening rests singularly and absurdly with the woman. It is downright unfair to expect a woman to face the situation all on her own without the support of the menfolk. It is the joint responsibility of man and woman to act against the injustice being perpetrated against either of them.

In the context of women’s safety, men need to walk the extra mile and be much more chivalrous and gallant than otherwise. A lot of self-introspection needs to be attempted by man to identify the sources of the evil of assault on a woman’s body, honour and life. A man should follow the self-introspection exercise with a cleansing operation to rid himself, and thereby the society, of the toxins of male chauvinism, contempt for women, objectifying of woman and, above all, complacency, hopelessness and resignation to the prevailing situation.

The mainstream media (MSM) has a significant role to play in the upliftment of the image of women in the eyes of men. Vulgarity, obscenity and portrayal of woman as an object of sexual gratification should be abhorred. In addition to the governmental measures to censor the objectionable material from infiltrating into the output of a responsible mass media, there should be self-auditing by the media itself. Provocative content and cheap titillation should find no place in what the public get to watch.

The government, on its part, should seriously explore the possibility of tightening the restrictions on pornography, which breaches all norms of decency and decorum. This is undoubtedly easier said than done, but the exercise needs to be undertaken to protect the honour of women. Indian culture is prone to a broadside by anti-national forces if the plight of our women (and children) is left to the tender mercies of the elements that promote decadence and degradation at the altar of commercialism in the name of freedom of expression.

Indian judiciary has to operate in tandem with the process of lawmaking. While doing so, it should not overlook the sentiments of an irate public which gets exercised over cruelty or indignity heaped on women. Should the criminal elements, including the juveniles among them whose involvement in heinous crimes against women, such as rape and murder, has been conclusively proved be allowed legal protection under human rights in the same measure as in the case of the convicts of petty offences? How swiftly can their trial and conviction be finalised and punishment meted out?

Furthermore, how far can a counsel be allowed to prolong a case on flimsy legal points and thereby delay and subvert the judicial system in the name of individual liberty or human rights? These are some questions begging for urgent replies in the quest of justice for woman. This is especially true since a Delhi court has been postponing the execution of four convicts in the 2012 Nirbhaya gang rape and murder case on one pretext or the other even though the trial was conducted on a ‘fast track’ basis.