Education, awareness and the Uniform Civil Code (UCC) are some of the key factors which can constitute the basis of the program necessary to bring about women’s upliftment and empowerment across the country. 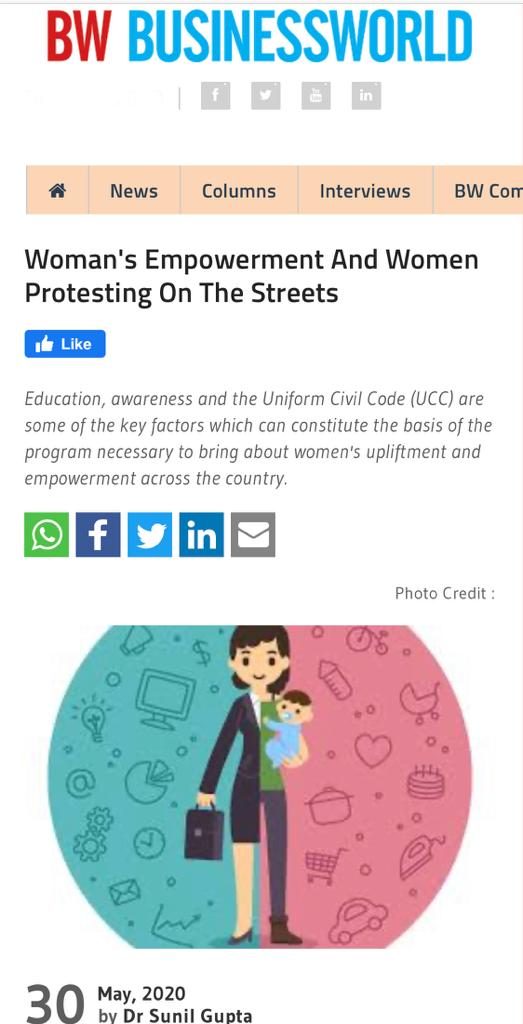 Indian women have traditionally enjoyed tremendous respect and recognition in the society. Vedas and Puranas contain several verses and accounts that give us an insight into how women in ancient India were accorded the highest respect and dignity. Ramayana and Mahabharata have women of outstanding qualities and traits as principal characters. In fact, these epics are about the downfall of mighty kings who paid with their lives for committing the audacity of dishonouring women of exemplary character. Sita, Kunti, Draupadi and Savitri were some of the eminent women who led illustrious lives as empowered women in the days of yore.

There were women rishis who were held in high esteem. There are certain rituals in Sanatana Dharma, which cannot be performed by men without their wife by their side. Honouring of women of sterling character and outstanding qualities gradually triggered the practice of worshipping of women deities. The exalted status of women continued down the line in history. In royal households, there were talented women of extraordinary intelligence known for taking important decisions. Even in humble households, women were free to voice their opinions, which were factored into while making important decisions that had far-reaching implications.

Loss of Sheen
Unfortunately, the glory of the Indian woman lost its sheen over a period of time. The invasion of Bharatvarsha by alien marauders and European colonialists had a terribly adverse impact on the position of women in our society. Women, who were till then in the forefront of practically every walk of life, had to be kept under the wrap in their own interest. They had to remain anonymous to safeguard their own honour and that of their family. When the life and reputation of the people were at stake, women who constituted the driving force of successful family life and were the custodians of the culture of the land had to be protected from the enemies.

The continued practice of restricting the scope of a woman’s freedom to the sanctity of home for indefinite periods of time resulted in the permeation and crystallization of corrupt practices in Indian society. Women were heard and not seen in the public domain. They did not, however, hesitate to rise to the occasion when circumstances demanded their active role. Rani Laxmi Bai of Jhansi and Rani Chennamma of Kittur were classic examples of such exceptions to the rule of women keeping a low profile. Even in such a constricted atmosphere, the Indian mother vindicated her mettle by contributing to the grooming and the raising of brave men like Chhatrapati Shivaji.

During the Mughal rule and the British colonial era, the phenomenal Gurukul system of Bharat withered, which marked the extinction of our ancient formal education system. It was the women at home who took charge of the task of educating their wards from the treasure trove of religious and cultural information and knowledge. Love for the land, devotion to Dharma and service to humanity were instilled in the minds of the young men who would grow up to become brave warriors and strive to liberate their land from the clutches of the occupying forces. History is replete with instances of unsung and faceless women being the sources of inspiration for successful men.

Women Surge Ahead
The advent of Independence heralded the dawn of a new era. Women who had participated in the freedom movement were moulded in the image of the Bharatiya N?ri known for her penchant for age-old traditions and conventions, and a low profile. The post-Independence women were quick to emerge from the shadows of those of the past. The opening up of new vistas in both academic and career opportunities whetted women’s appetite for parity with men in all walks of life. Women started breaking one glass ceiling after another with a regularity and rapidity unimaginable in their mother’s time.

Emboldened by the Constitution, which not only guarantees parity between genders but even encourages positive discrimination by the State in favour of the fair sex, more and more women started making a mark for themselves in practically every public domain. Free India has had a woman Prime Minister and several women holding high offices of cabinet ministers, Chief Ministers, Governors and any number of legislators. The Narendra Modi government has displayed an avid interest and strength of conviction in implementing schemes and programs for women’s welfare such as ‘Beti Bachao Beti Padhao’ and ‘Ujjawala’.

The landmark abrogation of Articles 370 and 35A effectively brought the discrimination of the Muslim women in J&K to an end. The abolition of the reprehensible practice of Triple Talaq also brought cheer in the life of Muslim women nationwide, who had all along been subjected to discrimination in the matter of marriage and divorce. These two legislative measures were no less than a surgical strike against a historical imbalance and an injustice to women on the pretext of an unjustifiable religious practice dating back to medieval ages. Consequently, a section of Indian women who had thus far remained voiceless in free India has been empowered and set on the course of further development along with the other women of our country.

Brainwashed and Misled
A lot more good work still needs to be carried out by the BJP and the Central government for the upliftment of women who are caught in the cobwebs of ignorance and gender imbalance. Such women are not familiar with the scope, application and importance of the ambitious legislative measures already undertaken by the BJP-led NDA government or that are in the pipeline. The CAA, NPR and NRC are cases in point. The nation has been a witness to some ignorant women with a ghetto mindset being misguided and instigated to turn against the government and the State by communal elements and anti-national forces having a divisive agenda.

These women are brainwashed to believe that their religion is in danger at the hands of the Modi government, and they would be evicted from India on the basis of their religious identity. We have witnessed sit-in protests on the streets of Delhi by such groups of women since mid-December last year, which they eventually called off a few weeks back. Those protests sparked still more protests that degenerated into communal strife, claimed scores of lives and damaged public properties during acts of killings, arson and loot. A spectacle as far removed from the strides in the nation’s progress and self-development made by the truly empowered women, as it could get.

Awareness and Empowerment
Evidently, the protesting women were used as a front by the anti-India forces for creating a rift between the majority and the minority communities. The mobs, which rule the streets during communal clashes and their instigators, should not be spared. They should be dealt with as enemies of the State. The women, who play into their hands, should be debriefed by the authorities with an awareness program. This is by no means an easy task. Education, awareness and the Uniform Civil Code (UCC) are some of the key factors which can constitute the basis of the program necessary to bring about women’s upliftment and empowerment across the country.