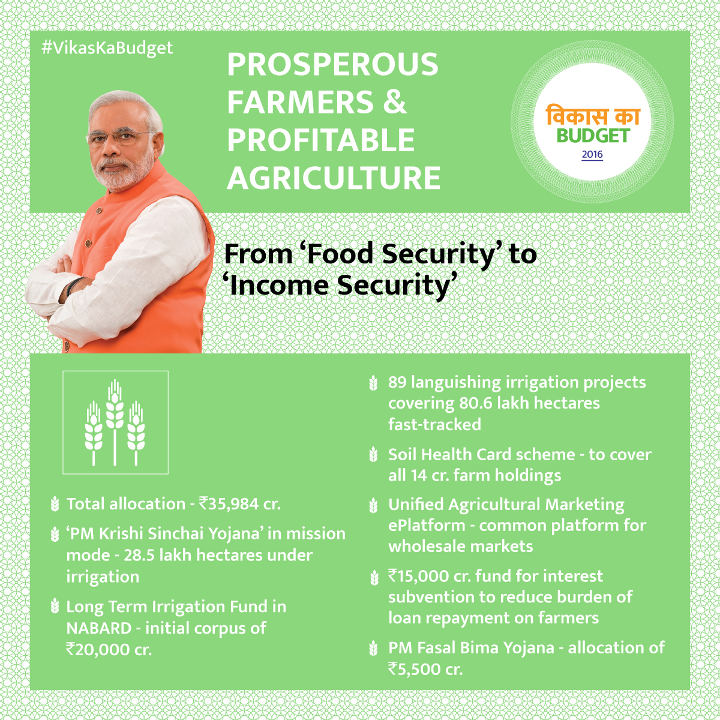 Currently, India’s share in global agricultural output stands at 7.68%, and it is easy to fathom the pivotal role this sector plays in the country. India has always been an agrarian economy, with the agriculture sector contributing nearly 17.9% to its gross domestic product, as per the Planning Commission statistics of 2014. Despite the sector’s contribution to the Indian economy being higher than the world average, it appears minuscule when correlated with its population. Nearly 60% of India’s population is associated with agriculture and allied activities. No doubt, the impact of the Green Revolution on Indian agriculture has been exemplary, but it has been languishing in the absence of any new development. As such, the sector is facing its worst crisis now as two consecutive droughts led to severe crop failure. This, in turn, has led to runaway inflation eating into the real income of farmers.

In 2011, the then Union government had allowed 100% FDI in the agriculture sector. This enabled the entry of global power brands into India with the right to stake a claim in some areas of the farm sector. Although it was envisioned that such companies would help enhance rural employment alongside providing competition, the reality has been a bit different. The relation between the farmer and his produce is no longer the same; instead, it has been replaced by the commercialization of produce and marginalization of the farmer. The dent, not surprisingly, has further aggravated the situation. Today this sector is in no position to share a status similar to industry or services.

The Narendra Modi-led National Democratic Alliance (NDA) government has realized the severity of this precarious situation and has announced some measures to boost the sector. For example, in the Union Budget 2016, it has promised to double the farm income in the next six years. If the intent of the government is sincere, as seen in its Niti Aayog paper, it will go a long way in reviving the distressed sector. Another welcome step taken by the NDA government is the revamping of crop insurance. Although it will take some time to show results, the Pradhan Mantri Fasal Bima Yojna (PMFBY) will serve as a long-term and most exhaustive solution. The scheme aims to bring a large number of farmers under crop insurance by offering them lowest-ever premium rate. The previous crop insurance schemes have failed mainly because of high premium charges. With the government providing a single premium rate for each season by removing seasonal premium rates, a significant number of farmers may opt to get their crops insured. The revamped scheme has also announced coverage for inundation, post-harvest risks as well as unseasonal rains for the first time.

To supplement the above efforts of the Union government, enumerated below are a few recommendations that can make a positive and significant contribution to spur the growth of the Indian agriculture sector.

Increase Government Focus on Agriculture: Successive governments in India paid attention to the non-agriculture sector as the measure to boost the economy. The focus on manufacturing, particularly after liberalization of the economy in the early Nineties, helped rapid growth in urban employment while rural employment saw a steady decline. Only a very small portion of Indian agriculture produce is exported making this labour-intensive sector majorly depend on local demand only. Half-hearted government policies to drive this sector have led to disappointing results. For example, a severe shortage of water needed for irrigation in states like Maharashtra has not been suitably addressed. For a crisis as large as this, measures have to be taken up on a war-footing. However, there has not been any concerted effort to end the woes of the hapless farmers.

The rising cases of farmer suicide have been debated in Parliament, but there has not been much headway. As if the situation was not bad enough with recurring droughts, international markets also witnessed a decline in prices of agricultural products. A drought relief fund, demanded by the states to come out of the vicious circle of crop failure and to increase the burden of debt, is the need of the hour and has not been met by the Centre yet. Many may argue that it is a short-term measure, but if lives have to be saved, the farmers need immediate relief to help augment their income. Our government must do everything it can to fructify its much-talked-about proposal to double farm income by 2022.

Upgrade Storage Facilities and Eliminate Corruption: The sorry state of agriculture warehousing calls for immediate attention. Every year hundreds of tonnes of foodgrains are found rotting in godowns due to bad storage facilities, while villages keep reeling under hunger and starvation. Furthermore, this part of the supply chain is a hub of corruption. For instance, in April 2016, the Punjab government reported the disappearance of food grains worth Rs 20,000 crore from the Food Corporation of India (FCI) godowns in the state. Since the state government had used the public borrowing route to fund this program, this scam is the outcome of rampant corruption and lack of accountability prevailing in the Indian polity and bureaucracy. While some suspect that the scam happened at the stage of procurement itself, other say the missing food stocks have been siphoned off from the godowns. Meanwhile, the Punjab government has been asserting that all stocks procured over the years have been duly accounted for.

Improve Productivity per Hectare: There is an urgent need to improve the quality of the soil. Aggressive use of land to produce the crop with the help of chemically-aided fertilizers has significantly contaminated and depleted the natural quality of the soil. The harmful and toxic fertilizers that have been used have also promoted salinity, thereby making irrigation unsuitable. In developed countries, the government spends millions of dollars in Research & Development (R&D) of soil conservation systems to ensure that the productivity per hectare is retained. They also invest in irrigation systems, including cover cropping, to make sure that moisture and nutrients are retained in the soil. Our Central and state governments should take note of such international practices and adopt some of those measures.

Promote Use of Modern and Innovative Technology: To this day, Indian farmers are ill-equipped and practice traditional methods of farming. They remain unaware of large-scale and modern irrigation methods (except the use of tractors) primarily due to lack of knowledge and lack of funds. The Central and state governments should, therefore, promote the use of new and innovative farming technologies and provide the small local farmers with technical training and material assistance, including improved varieties of plants. The government should also set up “demonstration” projects that will benefit both small and big farmers.

Stop Procuring Agri Land for Urban Development: The phenomenon of acquiring agricultural land for putting up factories have driven many farmers away from their own land while adding to the number of unemployed people. Stripped of their small landholdings and with inadequate financial compensation, the landless labourers have no option but to migrate to cities to work in factories as daily wage earners. In the prevailing scenario, the government needs to step in with alternative farm income plans that can possibly start the reverse migration of these labourers. Such a move will also put an end to disguised unemployment.

Incentivize Small Landowners: One of the biggest problems related to Indian irrigation system is concerned with small personal land holdings. The size of their arable land has been dissuading farmers from investing in modern equipment and innovative methods of farming. Most of the high-end farm equipment are meant for large-scale irrigation practices and are beyond the financial means of small farmers. To overcome such limitations, the government should design policies that would encourage formation of Small Landowners Associations or Farmers Corporations so that a good number of small farmers can come together and collectively do cooperative or corporate farming. The government should also eliminate all kinds of restrictions that are prevailing on corporate farming.

Ensure Cheap Power and Water Supply: Though irrigation policies are already in existence, their implementation in an efficient and meaningful manner is utterly lacking. This has resulted in an imbalance in the distribution of relevant benefits. While the rich farmers having large commercial operations enjoy the benefit of cheap and uninterrupted water supply, many small farmers have been left out. Our government needs to ensure that such small farmers are also included in its policies and can reap the resultant benefits.

Provide Market Data and Supply Chain Info: Although natural calamities are responsible for rising food inflation, unavailability of real-time food supply chain is also to be blamed for price rise. Here too, the government has to step in with a system that showcases information on seasonal crops grown per hectare along with the expected prices. This system can help in eliminating the middleman, and the farmers will get their due. In the past, there have been efforts to do away with the middleman by establishing a centralized mandi. However, so far it has not yielded the desired results. The government can experiment by inviting the private sector to draw an online mechanism that will allow both producers as well as consumers to access real-time prices of commodities and agricultural produce. Besides, there should be a mechanism that enables consumers to find out about the existing food stocks in all godowns.

In the light of the above points, if the recommended measures are actually implemented there are very high chances that the neglected agricultural sector in our country, which has been reeling under various constraints, may witness a sharp revival, sooner than later.