While China is turning its back on the legitimate demands of the people of Hong Kong and has resorted to use of disproportionate extent of force to quell the movement for democracy, it had the gall to oppose the recent reorganization of Jammu and Kashmir by India in a democratic way. Democracy which is a misnomer in China, should worry about Hong Kong and not interfere in internal matters of democratic countries. 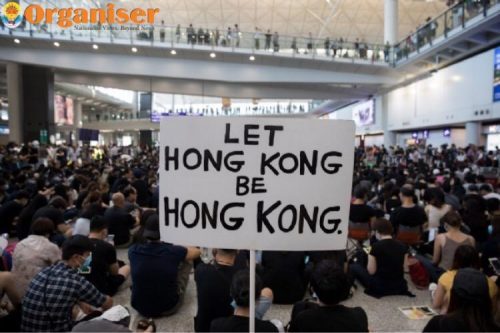 Hong Kong has been on the boil for nearly four months now. Even as the simmering discontent that manifested in the eruption of anti-government protests in June this year sent shock waves across to mainland China, its echoes were heard in the faraway shores of the US, Europe, Australia and Japan where protest marches were held in support of the movement in Hong Kong. Far from dying out, the flames of conflagration have since swelled in scope. The protestors have taken heart from the empathy extended by the international community and come up with more demands.

China, which was eyeing the developments warily in the initial stages, has since toughened its stand and condemned the goings-on as a “behaviour that is close to terrorism”. It has, at the same time espoused, in a reach out to the protestors, its resolve to continue with the existing ‘One country, two systems’ policy of administering the territory of Hong Kong. Nevertheless, the protests have shown no signs of abating, giving Beijing a lot to think and worry about the future course of action.

Breaking Out of Protests

Hong Kong has had a unique and checkered history. In 1997, its erstwhile British colonial masters handed it back to China on the understanding that Hong Kong would enjoy autonomy. Although it is indeed enjoying some level of autonomy, Hong Kong’s status beyond the cut-off date of 2047 is not clear. For it is in that year when the ‘Basic Law’ that ensures it a judiciary and legal system distinctly different from mainland China’s, expires. An overwhelming majority of the people of Hong Kong, which has evolved into a major port, and financial and manufacturing hub, don’t take pride in identifying themselves as Chinese.

They don’t want to ever lose out on their democratic rights, no matter how few, with a seamless merger with mainland China. It is precisely their apprehension of the looming threat of the loss of a separate identity that has precipitated the current unrest. When the government, headed by Carrie Lam, introduced in April an extradition bill in the Legislative Council, widespread fear of possible extradition of dissidents, journalists and activists to mainland China broke out. Soon it started to spread like a forest fire, despite a crackdown.

The protests gained momentum at a furious pace to the extent of forcing the Hong Kong International Airport shut down for a day. The protestors were dispersed only to gather again and again to carry on their show of dissent against the heavy-handed government proposal. The government put up a brave resistance for some time. Then it relented and put the proposed legislation under suspension. Finally, it withdrew the proposal in September in the face of a determined show of strength by the dissidents who included activists, press and people from different strata of the society.

After having drawn the first blood, the protestors went on to demand more and more from the government. Their revised list of demands included the withdrawal of the government’s earlier categorization of the protests as “riots”, amnesty for all the arrested protestors, an independent inquiry into the police brutality, the resignation of Carrie Lam and universal suffrage for the elections of the Chief Executive and the Legislative Council. The government, which had succumbed to the dissidents’ pressure of withdrawing the extradition bill, was caught in a bind, not willing to go all the way in meeting the new demands. Consequently, the dissident action is yet to be fully contained. 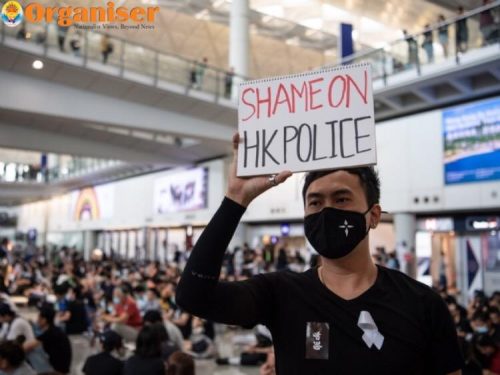 Protests are apparently one of the few hard options available to the Hongkongers to voice their dissatisfaction with the way the state affairs are being run. Dating back to 1966 when they protested over enhanced ferry costs, periodical protests over varied causes have become a way of life. Of late, protests have been on a focussed area – political. Faced with the stark probability of losing their already-sparse democratic rights and individual identity on being subsumed by mainland China, they want to hang on to the fig leaf of democracy. There have even been some cases of demand for independence for Hong Kong, which has not gained wide currency across the spectrum of protestors.

There have also been reports of infiltration by Triad gangs in the protests. In a vicious circle of violence breeding violence, the protests and police action have both been violence-prone. The police have been using tear gas shells and rubber bullets to disperse the protestors, some of whom started throwing bricks and firebombs. The protestors even mustered the courage to storm the Legislative Council. The predominant features of the protests have, however, been the unity of the participants and the consolidation of their resolve against state domination at the behest of China.

The spontaneity of the protests and the nonchalance of its participants are seen by the world as a takeoff on the freak but the momentous incident of the brutal state action on the unarmed protestors at the Tiananmen Square in Beijing in June 1989. Several protest marches have been held in the free world in support of the Hong Kong movement. Evidently, the world is in no mood to see a replica of the brutality unleashed by the Chinese state at Tiananmen Square. There is no doubt Hong Kong forms part of China. Yet, the movement blossoming there for democracy does not qualify state action in such ruthless and insensitive terms as is usually the case in China.

Way Out for China

China is in a predicament over Hong Kong. It is especially so from the Indian perspective. Despite being guilty of illegally occupying swathes of territory in Kashmir and Ladakh, China had the gall to oppose the recent reorganization of the erstwhile State of Jammu and Kashmir by India in a legally and Constitutionally valid manner. Besides, it had the temerity to suggest to India that it sit at the negotiating table with an errant Pakistan to sort out the latter’s claim over Kashmir. China has no locus standi to interfere in the issue of Kashmir as it is absolutely an internal matter of India. Unlike the case of Pakistan, which has repeatedly violated the ceasefire line and engineered acts of terror in Kashmir, the happenings in Hong Kong are a delicate matter crying out for sensitive handling by China. 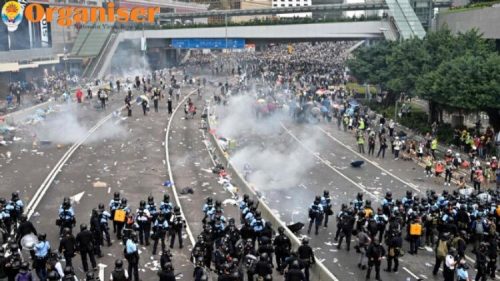 As such, China should not turn its back on the legitimate demands of the people of Hong Kong or succumb to the temptation of using disproportionate extent of force to quell the movement for democracy. Kashmir had been lagging behind in social and economic development. The Government of India has only done Kashmir justice by bringing it around to join the mainstream national development. India is now in the process of building a new Kashmir. On its part, China should do Hong Kong justice by letting it blossom on its own to emerge as a harbinger of democratic and economic development for the rest of the country. No other course of action would be appropriate or just.

80 thoughts on “Protests in Hong Kong and China’s Predicament”