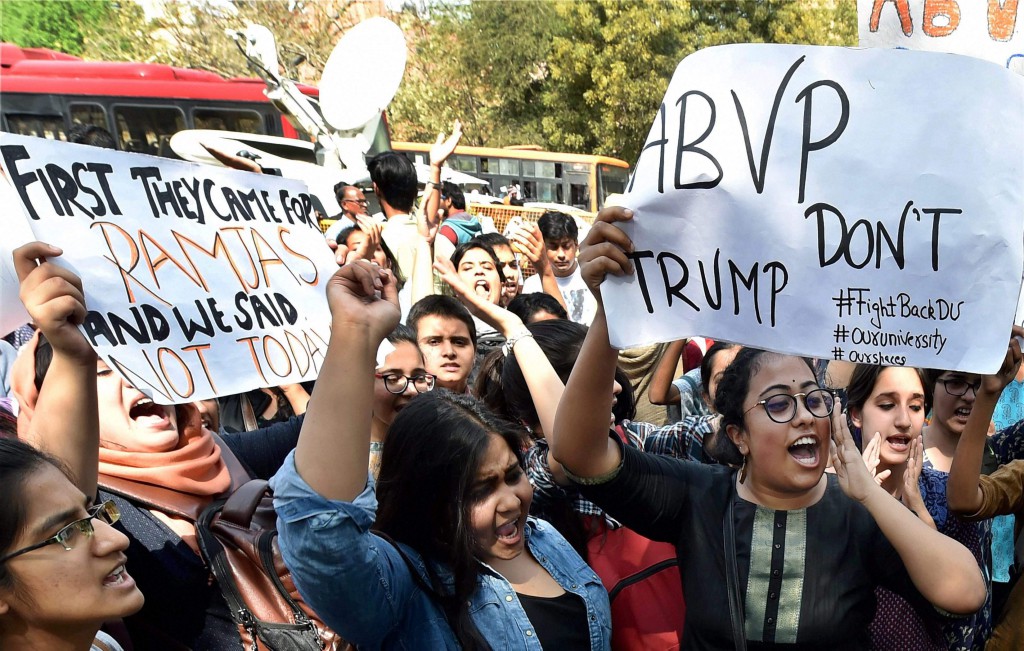 It has been long since Indian universities ceased to be cloisters of higher learning where scholars and the faculty were far too preoccupied solely with their academic engagements to stray into discourses on other areas of social and national significance during peace time. Of late, the situation has taken an intriguing turn with the left-leaning students becoming vociferous and assertive in their demand for space and freedom in the sanctity of their universities to express their views on practically any and every issue, such as nationalism, patriotism and the political cross-currents afflicting the country. They have also started protesting against situations arising from the government’s handling of the divisive, communal and fundamentalist forces in the frontline states of the country such as Jammu and Kashmir.

Evidently, these are issues that have nothing to do with their principal vocation of learning. What makes this development particularly jarring, and even alarming is the involvement of some anti-national elements, charged by the police with cases of sedition, in the exercise of their democratic rights by the student community and the uncalled for support readily extended to them by the Communists and other leftist political parties. Sloganeering of and plastering of the varsity premises with posters, screaming anti-national barbs like freedom for Kashmir (Azadi), dismemberment of the nation, and glowing tributes to the enemies of the State who have been found guilty and punished by the judiciary or neutralized by the armed forces, as well as targeting of the territorial integrity of the nation, have become a worrisome matter of concern both for the university authorities and the lawenforcing agencies.

Unpleasant situations arise when warring factions of students, drawn along the lines of student associations with conflicting political orientations, are egged on by selfish politicians, and confront each other, with the wary law enforcing agencies keeping a benign eye on the disturbing events and occasionally stepping in to bring ugly brawls and downright showdowns under control. Despite all the watchfulness and preparedness on the part of the authorities, explosive situations do crop up with alarming regularity, resulting in mindless violence and furious nationwide debates in which the mainstream media, closely followed by the social media, exuberantly throw their hats in the ring, vying for a piece of action to improve their TRP ratings. Students who cannot be bothered to commit support to either faction get caught in the crossfire.

Furthermore, the student community as a whole, and the faculty, get embroiled in the vicious maelstrom of endless debates and sticky situations, reeking of political malodour, sooner than they realize and are hardly able to extricate themselves from the embroilment to retreat to their former state of quiet and peaceful seclusion from thehumdrum prevalent outside the precincts of their universities, in the pursuit of learning. Despite being among the principal victims of the clamour and wrangling affecting their wards, parents are left with hardly any say in the matter and remain mute witnesses to the seemingly endless rounds of shadow boxing and having nothing else to do apart from wringing their hands in despair. All these, when the nation as a whole, is in a dilemma, being hardly in a position to focus on resolving matters of extreme urgency and importance like cross-border terrorism, elections to state assemblies, and raging controversial issues like the Uniform Civil Code, demonetization, etc. The ruckus created compels the Central government to put all other important matters on the backburner so that it canredress the imaginary grievances and baseless misgivings of the studentcommunity.

Media in the Fray

The fetid state of affairs in the universities is further compounded by the trigger-happy media, which loses no time in rendering the unhealthy student-politician cocktail a vigorous stir, by granting extensive coverage and playing up the grievances of the student community, sidelining reports of more important incidents like the brave acts of our soldiers at the border who do not shy away from sacrificing their lives while encountering treacherous enemy soldiers and terrorists. Such a lopsided attitude and approach on the part of the media could be termed nothing short of an exercise inirresponsibility as it gives a misleading and very unreal halo to the recalcitrant elements among the student community protesting over issues, with barely any bearing on their interests in the first place. Egged on by the left-leaning political parties and goaded by a gleeful media, the student community gets carried away by the momentum and swiftness with which their rallies and demonstrations degenerate into sorry spectacles of infructuous student energy.

The recent incident of a 20-year old student of the Delhi University, whose father, a soldier in the Army, had become a martyr in an ambush by a bunch of terrorists, is an avoidable case of the flexing of muscles by the student community. Following an ugly fracas between two factions in the college campus, which got physical over an invite extended by a prestigious college of the Delhi University to a student leader, who is already facing legal action on charges of sedition, to be a guest speaker at an event organized by the college, the martyr’s daughter was shown in the media supporting the group that was gung-ho about the controversial student leader being allowed to have his freedom of expression. This was to the chagrin of the opposing group that was upbeat about nationalist sentiments and the unsuitability of the invited guest speaker under a shadow of sedition to be a speaker.

The martyr’s daughter was first shown holding a placard claiming that her father had been killed by war and not by the Pakistanis, and then holding another placard, screaming that she was not afraid of the student union that vehemently opposed participation by the detested guest speaker at the college event. Her act of dragging the name of her late father who had given up his life for the nation in Army action against a group of terrorists, trained and armed by an enemy country, to stand by someone who had already been caught up in the eye of a massive political storm which had barely blown over, albeit on the pretext of demanding freedom of expression, was both uncalled for and unfortunate. Her actions predictably provoked a backlash from the group of students who were determined that no quarter be given to the controversial student leader, charged with fanning anti-national sentiments, whose loyalty was suspected to lie not for the unity of the nation but elsewhere – withseparatists and divisive forces bent upon the disintegration of the Indian nation, in short, with the enemies of the State.

The far left political elements, who do not shy away from resorting to violent means to thwart the political system in the country and the stability of the nation, seized this opportunity to exploit the potentially explosive situation, by hurling invectives and throwing threats of bodily harm including rape and murder, at the young girl student who had stepped out of the line to make a point in support of the freedom of expression. The reflex action on the part of practically everyone involved in or monitoring the events was to suspect the students association against the misuse of the varsity precincts for the espousal of inflammatory and anti-national speeches. The affected girl student took up the matter with the Delhi Commission for Women, which provided her security in the form of two Home Guards.

Delhi Police have, on their part, filed a case against the miscreants. Meanwhile, Akhil Bharatiya Vidyarthi Parishad (ABVP), the association that was suspected of threatening the martyr’s daughter, alleged the involvement of elements of rival factions bent upon besmirching its name in the crime. It has also filed a case with Delhi Police against the real culprits. According to the preliminary investigation reports by the Police, the real culprits were not from the ABVP but from a left-wing student organization – namely the All India Students’ Association (AISA). Following the distressing developments, the martyr’s daughter kept a low profile and declared that her 20-year old self cannot take it anymore; and now she wanted to focus on her studies and keep away from further field action by the student groups. However, she hastened to exhort her friends and well-wishers to continue supporting the protesting student groups!

Meanwhile, the faculty at the department of English where the martyr’s daughter is studying have extended their unequivocal support to her. They have, in fact, gone ahead and issued a signed statement stating that it was the bounden duty of educational institutions to nurture responsible, sensitive, and critical thinking students without the fear of violent reaction. However, without meaning to cast aspersions on the young girl student who sidled in and sidled out of the controversy, the most bemusing feature of her brief you-blink-and-you-miss-her role in the sordid drama was not the ease of conscience with which she vindicated the Pakistanis of killing her father and not even the adroitness with which she excused herself from any further part in the protest movement albeit for the purpose of focusing on her studies, but the naivety displayed by her when she exhorted her friends to join and keep the protests going! Would it be too much to expect the young girl student and the faculty, to extend to the other protesting students, who could not be much older than her, a much-needed break for focusing on their own academic career rather than fritter their focus and energy on bogus protests?

Freedom No Licence to Subvert

Another amusing thing that the students’ day away from classes has thrown up is a quote by former Union Finance Minister P Chidambaram who said, “I think we’re confusing universities with monasteries. A university is a place where I have the right to be wrong.” Undoubtedly, students could afford to be wrong, not deliberately or wantonly, but owing to lack of maturity and experience with the worldly ways of politics where the stakes are high and gullible students are easy prey to self-serving politicians. That was precisely what Minister of State for Home Affairs KirenRijiju meant when he said that the Leftists were polluting the mind of the martyr’s daughter. Needless to say, what Rijiju said about the girl in the eye of the storm applies to other students as well. Besides, the protesting students who are entitled, by all means, to freedom of expression vested in them by the Constitution, erred in lending support to anti-nationals and separatists who had flagrantly glorified terrorists, traitors and mercenaries of an enemy country. They cannot complain against the State for not being lenient on them after doing their bit of treading on the toes of national interests like by supporting stone-pelters in Kashmir and glorifying traitors and enemies of the State by calling them, heroes and martyrs.

Not Too Much, Not Too Little

Samuel Johnson had famously said, “Every man has a right to utter what he thinkstruth, and every other man has a right to knock him down for it. Martyrdom is the test.” That happens to be the stance of the government, which cannot be faulted for practising what is in the national interests. Taking into account the seemingly endless rounds of acrimonious debates on intolerance happening nationwide, PresidentPranab Mukherjeeslammed the ‘Azadi league’. Asking the students to abstain from “propagating a culture of unrest”,he reminded them that the nation always comes first and it is high time the people embarked on a rediscovery of a national purpose and patriotism. Before asserting their right to freedom of expression, the student community would do well to exercise the privilege of listening to their elders. If that is too much to ask of them, they should realize that what they are asking for is not too little either.

87 thoughts on “Freedom of Expression and Martyrdom”