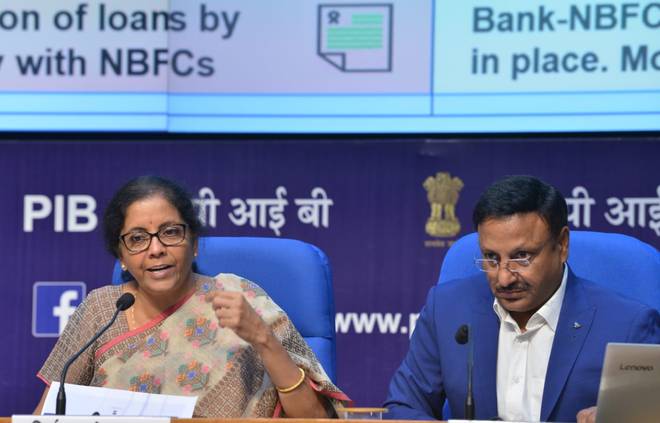 The knives are out for the Modi 2.0 government. Trying to pin it down to the mat over the slowing down of the nation’s economy, the Opposition has been trying to deal the unkindest cut of them all in a bid to make political capital out of the issue. No die-hard supporter of the BJP-led NDA government would call the slowdown a fictitious Frankenstein’s monster born out of the fertile imagination of a vengeful Opposition. However, it is not the result of the government’s mishandling of the economy either.  India happens to be just yet another port of call of the global phenomenon of an economic slowdown.

The US-China trade war that has been raging for well over a year has created volatility globally and has left its footprint all over the Indian economy. The textbook account of the slowdown attributes it to slower consumption demand and weaker investment. Patchy monsoons compounded by devastating floods and cyclones, general elections and anxiety on the part of investors on account of the muddying of the political waters by desperate Opposition parties – these are some of the factors which have contributed to the slowdown. Fortunately, a stable government at the Centre, sound foreign and defence policies and the complete eclipse of terrorism on the domestic front have had their salutary effect on the overall situation.

Neither Crisis nor Disaster

Apart from the loss of jobs in the auto sector and the slowdown in other labour-intensive sectors, the damage in no other industry is close to being termed terrible. There has been a discernible downswing in the private consumption segment, which can be perceived as a passing phase. Recalibration of the tax structure and the ruthless forays made by the NDA government in its war on black money and tax evasion have resulted in a wary investment climate. This has also led to the tightening of the fist by the cautious domestic consumer. Since the nation’s economy is interconnected with the global economy, it is not realistic to expect the former to totally distance itself from the reach or sway of the worldwide phenomenon. The situation on the domestic front is anything but alarming. Nor is it indicative of a crisis that could warrant fears of a recession.

The Central Government has pulled no punches in addressing the slowdown. Being well aware that the need of the hour is a comprehensive package of reform measures, it is intent on boosting job creation and making various sectors investment-friendly. The RBI announced, on its part, a resounding Rs 1.76 lakh crore transfer of surplus reserve to the Central Government. This timely measure provides the government with an opportunity to carry out remedial measures to cushion the freefall of the economy and arrest the slowdown.

To start with, the NDA government set in motion talks with representatives of all the sectors to hear out their problems as well as suggestions and solutions before it could take a stand. It announced the removal of the enhanced surcharge on capital gains on shares for both foreign portfolio investors and domestic investors previously unveiled in the budget. In a major move aimed at ushering in structural reforms, the government announced a slew of measures in the banking sector. Several public sector banks were merged, bringing down their number from 27 to 12. While doing so, the Central Government categorically ruled out job losses and provided upfront Rs 700,000-crore equity infusion to boost lending.

The banks have decided to launch interest rates linked with RBI repo rate. This translates into reduced EMI housing loans and cheaper working capital. In the auto sector, the Central government has assured, among other things, that it was not pushing for electric vehicles in place of petrol and diesel ones. All GST refunds due to micro, small and medium enterprises (MSMEs) would be promptly paid in a time-bound manner in a bid to ease liquidity and cash flow for small businesses. The federal government is also seized of the need to ensure a smoother tax collection process by means of technology and big data. Targets for tax collection have been fixed with the current economic scenario in mind. A signal has been sent across to the tax authorities “not to over-reach”.

The Central Government has also assured that there will be no curtailment on the budgetary spending and social sector spending because of the economic slowdown. This would help in the realisation of the government’s target of US$5-trillion economy within a 5-year timeframe. Furthermore, a task force has been set up to identify infra projects for Rs 100-lakh crore investment. The government is all geared up to defuse the economic slowdown with fiscal stimuli. Public Sector banks have cut interest rates on housing, auto and other personal loans to boost consumer demand well ahead of the festive months of Dussehra and Diwali. They will also organise credit shamiana meetings to disburse loans to Non-Banking Financial Companies and retail borrowers, including homebuyers and farmers.

On September 20, the Union Finance Minister has announced a slashing of the corporate tax for domestic companies (from 30 to 22%) and new local manufacturing companies (from 25% to 15%). Enhanced surcharge on income will not apply to capital gains arising out of equity sale or equity-oriented funds liable to Securities Transaction Tax. All these will go a long way in restoring confidence in the Indian equity markets and boosting the overall profitability of Corporate India. In another positive development, the GST Council has also announced rate cuts on several items in response to demands from several quarters of India Inc.

Despite the slowing down, the basics of the Indian economy are excellent, and the macro indicators are on an even keel. For instance, forex reserves at US$428.6 billion are quite high; CPI inflation is tracking at 3.2% and has remained below the 4% mark for nearly 12 months; Core inflation has decelerated meaningfully during the past 12 months; Gross FDI flows have remained robust, tracking close to 2.4% of the GDP on a 12-month trailing basis. Even though the GDP growth rate has slipped to 5% during the first quarter of the current fiscal, the fundamentals of the Indian economy are quite sound and are relatively better than the economies of many other countries across the world.

Neither Fish nor Fowl

In view of the above, it is evident that the prophets of doom are wrong. Their call to press the panic button is both premature and immature. This move may be an attempt to divert the NDA government’s attention and thereby weaken its determination to tackle economic offences and corruption on a war footing, or it may be a desperate act to give the Modi 2.0 government a bad name. Hence, let me here reiterate that the current economic slowdown is not a crisis, and there is no need to panic. The slew of revival measures announced recently by Finance Minister Nirmala Sitharaman is expected to bolster the Indian economy and enable it to achieve higher growth rates in the coming months.