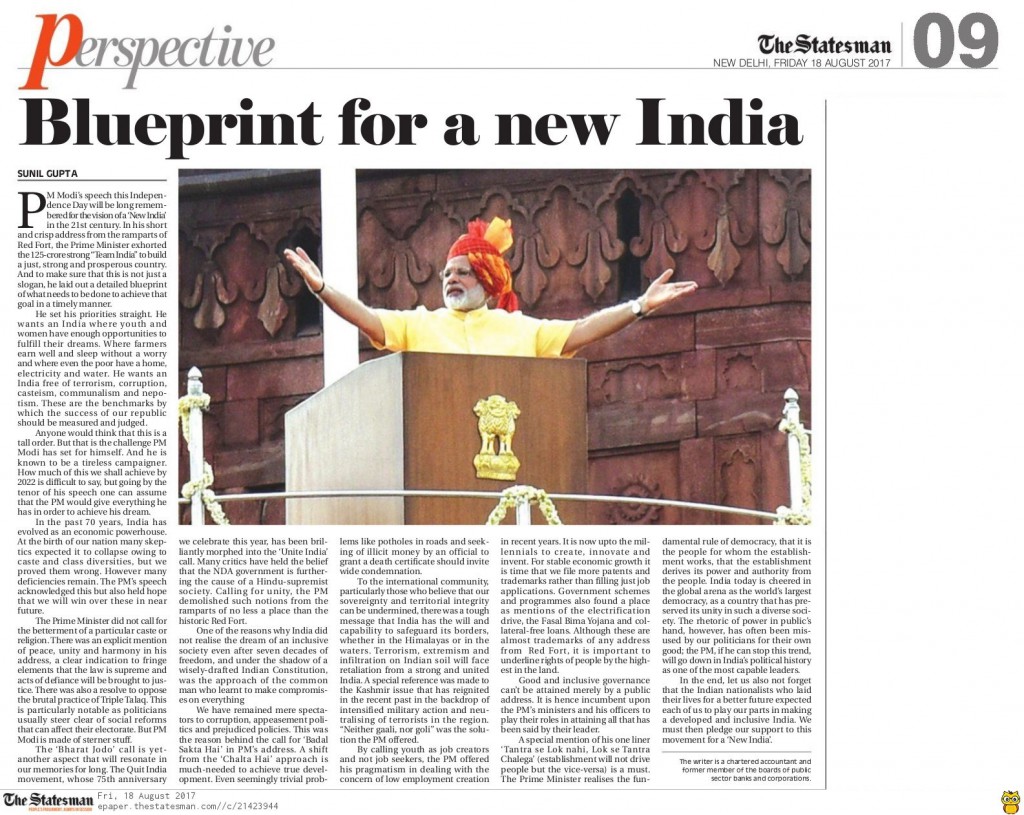 PM Modi’s speech this Independence Day will be long remembered for the vision of a ‘New India’ in the 21st century. In his short and crisp address from the ramparts of Red Fort, the Prime Minister exhorted the 125-crore strong “Team India” to build a just strong and prosperous country. And to make sure that this is not just a slogan, he laid out a detailed blueprint of what needs to be done to achieve that goal in a timely manner.

He set his priorities straight. He wants an India where youth and women have enough opportunities to fulfill their dreams. Where farmers earn well and sleep without a worry and where even the poor have a home, electricity and water. He wants an India free of terrorism, corruption, casteism, communalism and nepotism. These are the benchmarks by which the success of our republic should be measured and judged.

Anyone would think that this is a tall order. But that is the challenge PM Modi has set for himself. And he is known to be a tireless campaigner. How much of this we shall achieve by 2022 is difficult to say. But going by the tenor of his speech one can assume that the PM would give everything he has in order to achieve his dream.

In the past 70 years, India has evolved as an economic powerhouse. At the birth of our nation many skeptics expected it to collapse owing to caste and class diversities, but we proved them wrong. However many deficiencies remain. The PM’s speech acknowledged this but also held hope that we will win over these in near future.

The Prime Minister did not call for the betterment of a particular caste or religion. There was an explicit mention of peace, unity and harmony in his address, a clear indication to fringe elements that law is supreme and act of defiance will be brought to justice. There was also a resolve to oppose the brutal practice of Triple Talaq. This is particularly notable as politicians usually steer clear of social reforms that can affect their electorate. But PM Modi is made of sterner stuff.

The ‘Bharat Jodo’ call is yet-another aspect that will resonate in our memories for long. The Quit India movement, whose 75th anniversary we celebrate this year, has been brilliantly morphed into the ‘Unite India’ call. Many critics have held the belief that the NDAgovernment is furthering the cause of a Hindu-supremist society.Calling for unity, the PM demolished such notions from the ramparts of no less a place than the historic Red Fort.

One of the reasons why India did not realise the dream of an inclusive society even after 7 decades of freedom, and under the shadow of a wisely-drafted Indian Constitution,was the approach of the common man who learnt to make compromises on everything.

We have remainedmere spectators to corruption, appeasement politics and prejudiced policies. This was the reason behind the call for ‘BadalSakta Hai’ in PM’s address. A shift from ‘Chalta Hai’ approach is much-needed to achieve true development. Even seemingly trivial problems like potholes in roads and seeking of illicit money by an official to grant a death certificate should invite wide condemnation.

To the international community, particularly those who believe that our sovereignty and territorial integrity can be undermined, there was a tough message that India has the will and capability to safeguard its borders, whether in the Himalayas or in the waters.

Terrorism, extremism and infiltrationon Indian soil will face retaliation from a strong and united India. A special reference was made to the Kashmir issue that has reignited in the recent past in the backdrop of intensified military action and neutralizing of terrorists in the region. “Neither gaali, nor goli” was the solution the PM offered.

By calling youth as job creators and not job seekers, the PM offered his pragmatism in dealing with the concern of low employment creation in recent years. It is now upto the millennials to create, innovate and invent.

For stable economic growth it is time that we file more patents and trademarks rather than filling just job applications. Government schemes and programmes also found a place as mentions of the electrification drive, the Fasal Bima Yojana and collateral-free loans. Although these are almost trademarks of any address from Red Fort, it is important to underline rights of people by the highest in the land.

Good and inclusive governance can’t be attained merelyby a public address. It is hence incumbent upon the PM’s ministers and his officersto play their roles in attaining all that has been said by their leader.

A special mention of his one liner ‘Tantra se Loknahi, Lok se Tantra Chalega’ (establishment will not drive people but the vice-versa) is a must.

The Prime Minister realizes the fundamental rule of democracy, that it is the people for whom the establishment works, that the establishment derives its power and authority from the people. India today is cheered in the global arena as the world’s largest democracy, as a country that has preserved its unity in such a diverse society. The rhetoric of power in public’s hand, however, has often been misused by our politicians for their own good; the PM, if he can stop this trend, will go down in India’s political history as one of the most capable leaders.

In the end, let us also not forget that the Indian nationalists who laid their lives for a better future expected each of us to play our parts in making adeveloped and inclusive India. We must then pledge our support to this movement for a ‘New India’.

Blueprint for a new India

87 thoughts on “Blueprint for a new India”