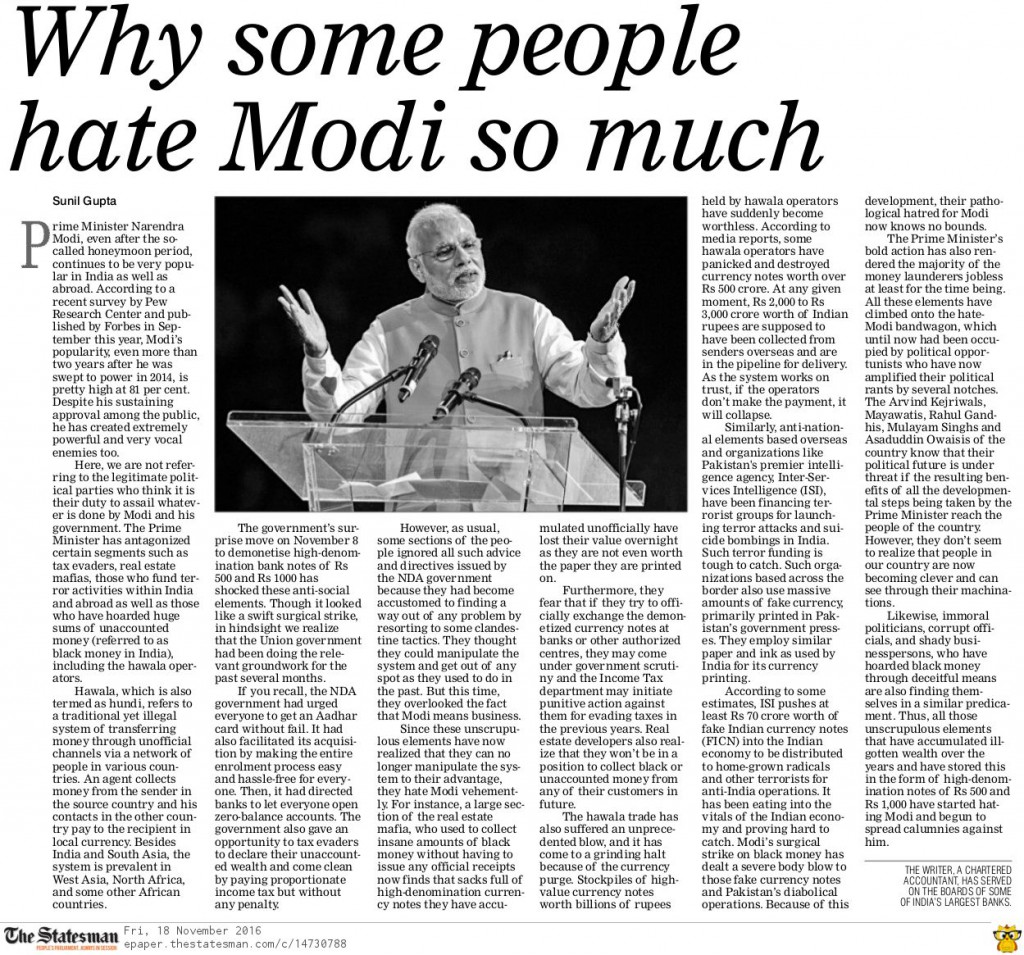 Indian Prime Minister Narendra Modi, even after the so-called honeymoon period, continues to be very popular in India as well as abroad. According to a recent survey by Pew Research Center and published by Forbes in September this year, Modi’s popularity, even more than two years after he was swept to power in 2014, is pretty high at 81%. Despite his sustaining approval among the public, he has created extremely powerful and very vocal enemies too.

The Plight of Hawala Operations

Here, we are not referring to the legitimate political parties who think it is their duty to badmouth whatever is done by Modi and his government. The Prime Minister has antagonized certain segments such as the tax evaders, real estate mafias, those who fund terror activities within India and abroad, as well as those who have hoarded up huge sums of unaccounted money (referred to as black money in India), including the Hawala operators.

Hawala, which is also termed as Hundi, refers to a traditional yet illegal system of transferring money through unofficial channels via a network of people in various countries. An agent collects money from the sender in the source country and his contacts in the other country pay to the final recipient in local currency. Besides India and South Asia, the system is prevalent in West Asia, North Africa, and some other African countries.

The NaMo government’s surprise move on November 8 this year to demonetise high-denomination bank notes of Rs 500 and Rs 1000 has shocked these anti-social elements. Though it looked like a swift surgical strike, in hindsight we realize that the Union government had been doing the relevant groundwork for the past several months. If you recall, the NDA government had urged everyone to get an Aadhar card without fail. It had also facilitated its acquisition by making the entire enrolment process easy and hassle-free for everyone. Then, it had directed banks to let everyone open zero-balance accounts. The government also gave an opportunity to tax evaders to declare their unaccounted wealth and come clean by paying proportionate income tax but without any penalty.

However, as usual, some sections of the people ignored all such advice and directives issued by the NDA government because they had become accustomed to finding a way out of any problem by resorting to some clandestine tactics. They thought they could manipulate the system and get out of any spot as they used to do in the past. But this time, they overlooked the fact that Narendra Modi, who is currently at the helm of affairs, is absolutely incorruptible and he means business.

The Dilemma of Corrupts, Keep It or Burn It

Since these unscrupulous elements have now realized that they can no longer manipulate the system to their advantage, they hate Modi vehemently. For instance, a large section of the real estate mafias, who used to collect insane amounts of black money without having to issue any official receipts now find that the sackful of high-denomination currency notes they have accumulated unofficially have lost their value overnight as currently, they are not even worth the paper they are printed on.

Furthermore, they fear that if they try to officially exchange the demonetized currency notes at banks or other authorized centres, they may come under government scrutiny and the Income Tax department may initiate punitive action against them for evading taxes in the previous years. Real estate developers also realize that they won’t be in a position to collect black or unaccounted money from any of their customers in future.

The hawala trade has also suffered an unprecedented blow, and it has come to a grinding halt because of the currency purge. Stockpiles of high-value currency notes worth billions of rupees held by the hawala operators have suddenly become worthless. According to media reports, some hawala operators have panicked and destroyed currency notes worth over Rs 500 crore. At any given moment, Rs 2,000 to Rs 3,000 crore worth of Indian rupees are supposed to have been collected from senders overseas and are in the pipeline for delivery. As the entire system works on trust, if the operators don’t make the payment, the whole system will permanently collapse.

Yet Another Surgical Strike on Pak Terror Funding

Similarly, anti-national elements based overseas and organizations like Pakistan’s premier intelligence agency, Inter-Services Intelligence (ISI), have been financing terrorist groups for launching terror attacks and suicide bombings in India. Such terror funding is tough to catch. Such organizations based across the border also use massive amounts of fake currency, primarily printed in Pakistan’s government presses. They employ similar paper and ink as used by India for its currency printing.

According to some estimates, ISI pushes at least Rs 70 crore worth fake Indian currency notes (FICN) into the Indian economy to be distributed to home-grown radicals and other terrorists for anti-India operations. It has been eating into the vitals of the Indian economy and proving hard to catch. Modi’s surgical strike on black money has dealt a severe body blow to those fake currency notes and Pakistan’s diabolical operations. Because of this development, their pathological hatred for Modi now knows no bounds.

Why Opposition Can Never Milk the Currency Ban Cow

The Prime Minister’s bold action has also rendered the majority of the money launderers jobless at least for the time being. All these elements have climbed onto the hate-Modi bandwagon, which until now had been occupied by political opportunists who have now amplified their political rants by several notches. The Arvind Kejriwals, Mayawatis, Rahul Gandhis, Mulayam Singhs and Asaduddin Owaisis of the country know that their political future is under threat if the resulting benefits of all the developmental steps being taken by the Prime Minister reach the people of the country. However, they don’t seem to realize that people in our country are now becoming clever and can see through their machinations.

Likewise, immoral politicians, corrupt officials, and shady businesspersons, who have hoarded up black money through deceitful means, are also finding themselves in a similar predicament. Thus, all those unscrupulous elements that have accumulated ill-gotten wealth over the years and have stored them in the form of high-denomination notes of Rs 500 and Rs 1,000 have started hating Narendra Modi and begun to spread calumnies against him.

106 thoughts on “Why some people hate Modi so much”