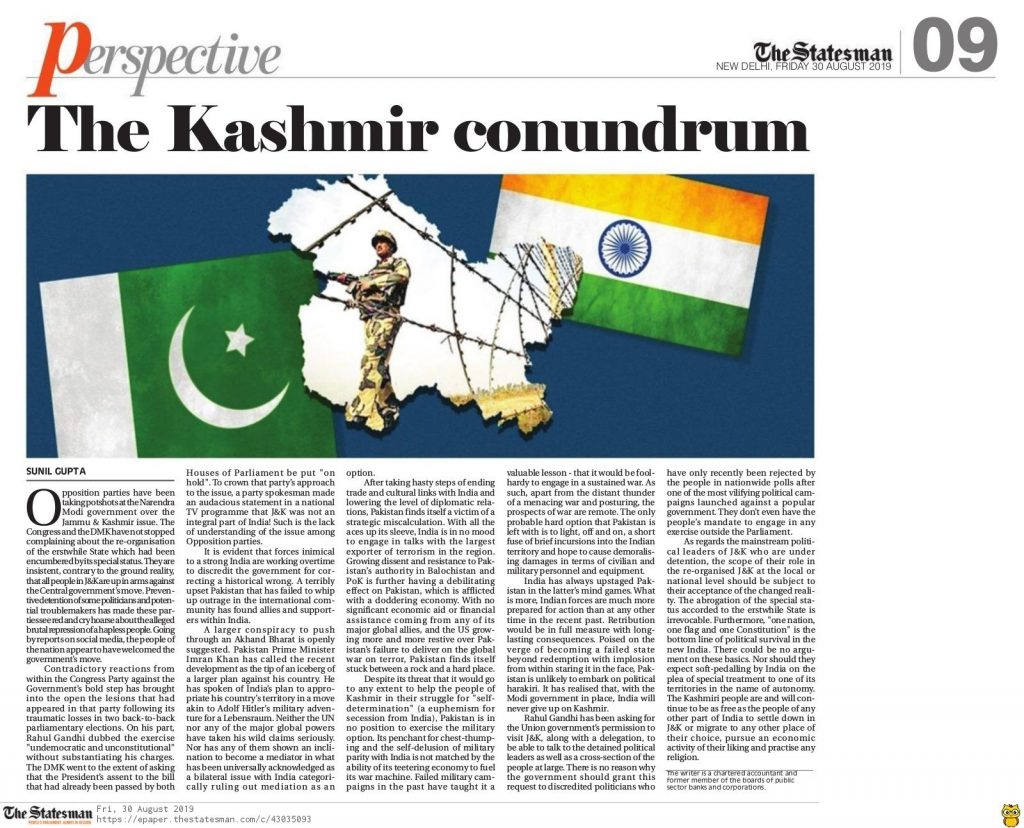 Opposition parties have been taking pot shots at the Narendra Modi government over the Jammu & Kashmir issue. The Congress and the DMK have not stopped complaining about the re-organisation of the erstwhile State which had been encumbered by its special status.They are insistent, contrary to the ground reality, that all people in J&K are up in arms against the Central government’s move. Preventive detention of some politician sand potential troublemakers has made these partiessee red and cryhoarse about the alleged brutal repression of a hapless people. Going by reports on social media, the people of the nation appear to have welcomed the government’s move.

Contradictory reactions from within the Congress Party against the Government’s bold step has brought into the open the lesions that had appeared in that party following its traumatic losses in two back-to-back parliamentary elections. On his part, Rahul Gandhi dubbed the exercise “undemocratic and unconstitutional” without substantiating his charges. The DMK went to the extent of asking that the President’s assent to the bill that had already been passed by both Houses of Parliament be put “on hold”. To crown that party’s approach to the issue, a party spokesman made an audacious statement in a national TV programme that J&K was not an integral part of India! Such is the lack of understanding of the issue among Opposition parties.

It is evident that forces inimical to a strong India are working overtime to discredit the government for correcting a historical wrong. A terribly upset Pakistan that has failed to whip up outrage in the international community has found allies and supporters within India.

A larger conspiracy to push through an Akhand Bharat is openly suggested. Pakistan Prime Minister Imran Khan has called the recent development as the tip of an iceberg of a larger plan against his country. He has spoken of India’s plan to appropriate his country’s territory in a move akin to Adolf Hitler’s military adventure for a Lebensraum. Neither the UN nor any of the major global powers have taken his wild claims seriously. Nor has any of them shown an inclination to become a mediator in what has been universally acknowledged as a bilateral issue with India categorically ruling out mediation as an option.

After taking hasty steps of ending trade and cultural links with India and lowering the level of diplomatic relations, Pakistan finds itself a victim of a strategic miscalculation. With all the aces up its sleeve, India is in no mood to engage in talks with the largest exporter of terrorism in the region. Growing dissent and resistance to Pakistan’s authority in Balochistan and PoK is further having a debilitating effect on Pakistan, which is afflicted with a doddering economy. With no significant economic aid or financial assistance coming from any of its major global allies, and the US growing more and more restive over Pakistan’s failure to deliver on the global war on terror, Pakistan finds itself stuck between a rock and a hard place.

Despite its threat that it would go to any extent to help the people of Kashmir in their struggle for “self- determination” (a euphemism for secession from India), Pakistan is in no position to exercise the military option. Its penchant for chest-thumping and the self-delusion of military parity with India is not matched by the ability of its teetering economy to fuel its war machine. Failed military campaigns in the past have taught it a valuable lesson – that it would be foolhardy to engage in a sustained war. As such, apart from the distant thunder of a menacing war and posturing, the prospects of war are remote. The only probable hard option that Pakistan is left with is to light, off and on, a short fuse of brief incursions into the Indian territory and hope to cause demoralising damages in terms of civilian and military personnel and equipment.

India has always upstaged Pakistan in the latter’s mind games. What is more, Indian forces are much more prepared for action than at any other time in the recent past. Retribution would be in full measure with long- lasting consequences. Poised on the verge of becoming a failed state beyond redemption with implosion from within staring it in the face, Pakistan is unlikely to embark on political harakiri. It has realised that, with the Modi government in place, India will never give up on Kashmir.

Rahul Gandhi has been asking for the Union government’s permission to visit J&K, along with a delegation, to be able to talk to the detained political leaders as well as a cross-section of the people at large. There is no reason why the government should grant this request to discredited politicians who have only recently been rejected by the people in nationwide polls after one of the most vilifying political campaigns launched against a popular government. They don’t even have the people’s mandate to engage in any exercise outside the Parliament.

As regards the mainstream political leaders of J&K who are under detention, the scope of their role in the re-organised J&K at the local or national level should be subject to their acceptance of the changed reality. The abrogation of the special status accorded to the erstwhile State is irrevocable. Furthermore, “one nation, one flag and one Constitution” is the bottom line of political survival in the new India. There could be no argument on these basics. Nor should they expect soft-pedalling by India on the plea of special treatment to one of its territories in the name of autonomy. The Kashmiri people are and will continue to be as free as the people of any other part of India to settle down in J&K or migrate to any other place of their choice, pursue an economic activity of their liking and practise any religion.

(The article “The Kashmir conundrum”  published in daily newspaper “The Statesman” on 30 August, 2019)

83 thoughts on “The Kashmir conundrum”