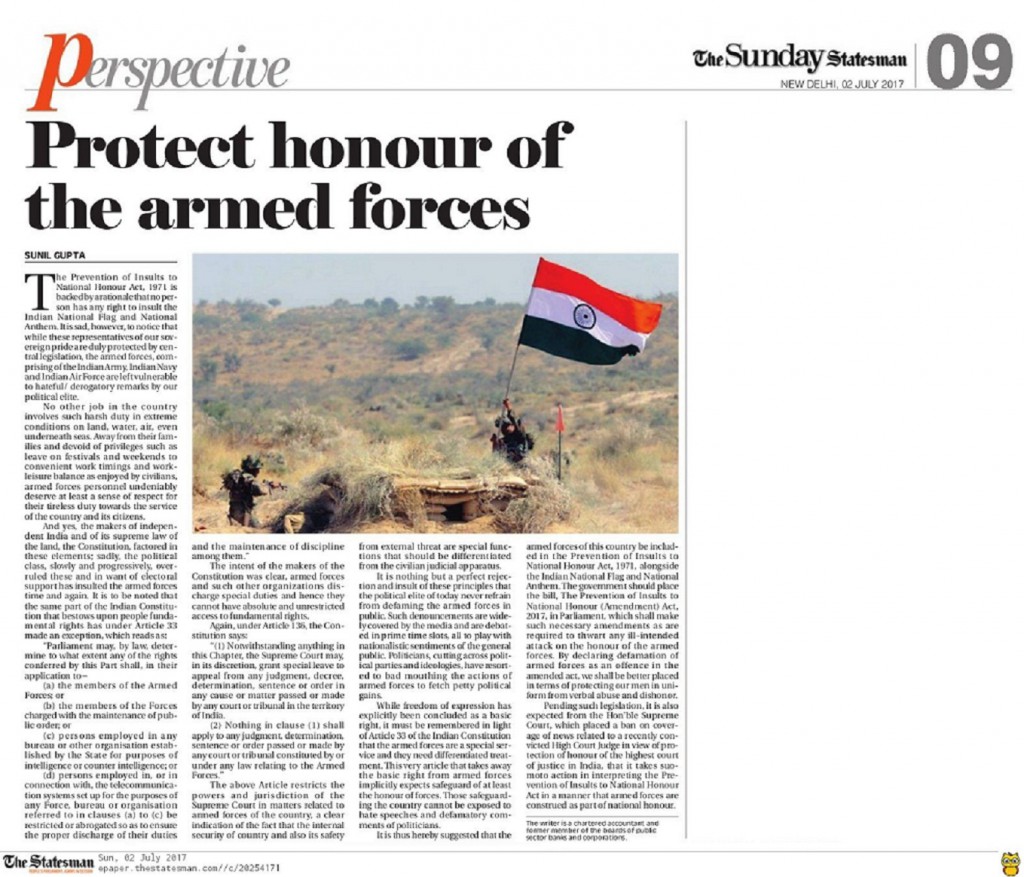 The Prevention of Insults to National Honour Act, 1971 is backed by a rationale that no person has any right to insult the Indian National Flag and National Anthem. It is sad, however, to notice that while these representatives of our sovereign pride are duly protected by central legislation, the armed forces, comprising of the Indian Army, Indian Navy and Indian Air Force are left vulnerable to hateful/ derogatory remarks by our political elites.

No other job in the country involves such harsh duty in extreme conditions on land, water, air, even underneath seas. Away from their families and devoid of privileges such as leave on festivals and weekends to convenientwork timings and work-leisure balance as enjoyed by civilians, armed forces personnel undeniably deserve at least a sense of respect for their tireless duty towards the service of the country and its citizens.

And yes, the makers of independent India and of its supreme law of the land, the Constitution, factored in these elements; sadly, the political class,slowly and progressively, overruled these and in want of electoral support has insulted the armed forces time and again. It is to be noted that the same part of the Indian Constitution that bestows upon people fundamental rights has under Article 33 made an exception, which reads as:

“Parliament may, by law, determine to what extent any of the rights conferred by this Part shall, in their application to –

(a) the members of the Armed Forces; or

(b) the members of the Forces charged with the maintenance of public order; or

(c) persons employed in any bureau or other organisation established by the State for purposes of intelligence or counter intelligence; or

(d) persons employed in, or in connection with, the telecommunication systems set up for the purposes of any Force, bureau or organisation referred to in clauses (a) to (c)

be restricted or abrogated so as to ensure the proper discharge of their duties and the maintenance of discipline among them.”

The intent of the makers of the Constitution was clear, armed forces and such organizations discharge special duties and hence they cannot have absolute and unrestricted access to fundamental rights.

Again, under Article 136, the Constitution says:

“(1) Notwithstanding anything in this Chapter, the Supreme Court may, in its discretion, grant special leave to appeal from any judgment, decree, determination, sentence or order in any cause or matter passed or made by any court or tribunal in the territory of India.

(2) Nothing in clause (1) shall apply to any judgment, determination, sentence or order passed or made by any court or tribunal constituted by or under any law relating to the Armed Forces.”

The above Article restricts the powers and jurisdiction of the Supreme Court in matters related to armed forces of the country, a clear indication of the fact that the internal security of country and also its safety from external threat are special functions that should be differentiated from the civilian judicial apparatus.

It is nothing but a perfect rejection and insult of these principles that the political elites of today never refrain from defaming the armed forces in public. Such denouncements are widely covered by the media and are debated in prime time slots, all to play with nationalistic sentiments of the general public. Politicians, cutting across political parties and ideologies, have resorted to bad mouthing the actions of armed forces to fetch petty political gains.

While freedom of expression has explicitly been concluded as a basic right, it must be remembered in light of Article 33 of the Indian Constitution that the armed forces are a special service and they need differentiated treatment. This very article that takes away the basic right from armed forces implicitly expects safeguard of at least the honour of forces. Those safeguarding the country cannot be exposed to hate speeches and defamatory comments of politicians.

It is thus hereby suggested that the armed forces of this country be included in the Prevention of Insults to National Honour Act, 1971, alongside the Indian National Flag and National Anthem. The government should place the bill, The Prevention of Insults to National Honour (Amendment) Act, 2017, in Parliament, which shall make such necessary amendments as are required to thwart any ill-intended attack on the honour of the armed forces. By declaring defamation of armed forces as an offence in the amended act, we shall be better placed in terms of protecting our men in uniform from verbalabuse and dishonor.

Pending such legislation, it is also expected from the Hon’ble Supreme Court, which placed a ban on coverage of news related to a recently convicted High Court Judge in view of protection of honour of the highest court of justice in India, that it takes suo-moto action in interpreting the Prevention of Insults to National Honour Actin a manner that armed forces areconstrued as part of national honour.

Protect Honour of the Armed Forces

92 thoughts on “Protect Honour of the Armed Forces”