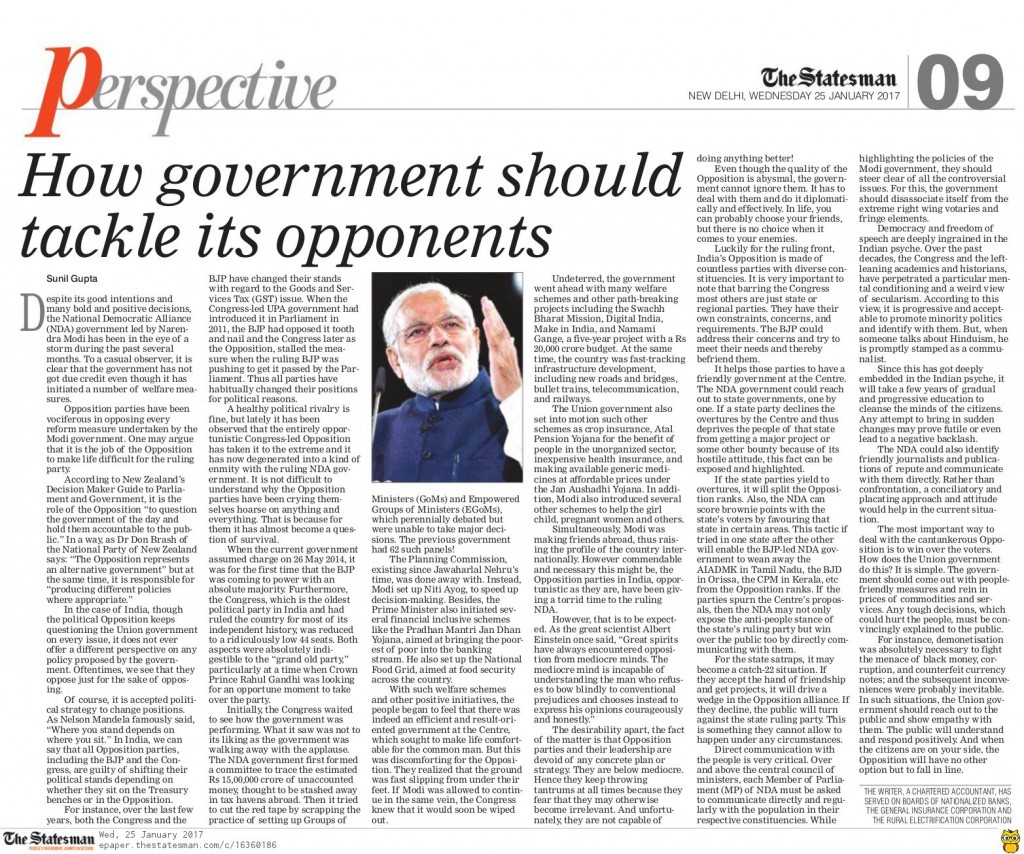 Despite its good intentions and many bold and positive decisions, the National Democratic Alliance (NDA) government led by Narendra Modi has been in the eye of a storm during the past several months. To a casual observer, it is clear that the government has not got its due credit even though it has initiated a number of welfare and forward-looking measures.

The Opposition parties have been vociferous in opposing each and every reform measure undertaken by the Modi government. One may probably argue that it is the job of the Opposition to make life difficult for the ruling party.

According to New Zealand’s DecisionMaker Guide to Parliament and Government, it is the role of the Opposition “to question the government of the day and hold them accountable to the public.” In a way, as Dr Don Brash of the National Party of New Zealand says: “The Opposition represents an alternative government” but at the same time, it is responsible for “producing different policies where appropriate.”

In the case of India, though the political Opposition keeps questioning the Union government on each and every issue, it does not ever offer a different perspective on any policy proposed by the government. Oftentimes, we see that they oppose just for the sake of opposing.

Of course, it is an accepted political strategy to change positions. As Nelson Mandela famously said, “Where you stand depends on where you sit.” In India, we can say that all Opposition parties, including the BJP and the Congress, are guilty of shifting their political stands depending on whether they sit on the Treasury benches or in the Opposition.

For instance, over the last few years, both the Congress and the BJP have changed their respective stands with regard to the Goods and Services Tax (GST) issue. When the Congress-led UPA government had introduced it in Parliament in 2011, the BJP had opposed it tooth and nail and the Congress, later, as the Opposition, stalled the same when the ruling BJP was pushing to get it passed by the Parliament. Thus, all parties have habitually changed their positions for political reasons.

A healthy political rivalry is fine, but lately, it has been observed that the entirely opportunistic Congress-led Opposition has taken it to the extreme and it has now degenerated into a kind of enmity with the ruling NDA government. It is not difficult to understand why the Opposition parties have been crying themselves hoarse on anything and everything. That is because for them now it has almost become a question of their survival.

When the current Union government assumed charge on May 26, 2014, it was for the first time that the BJP was coming to power with an absolute majority. Furthermore, the Congress, which is the oldest political party in India and had ruled the country for most of its independent history, was reduced to a ridiculously low 44 seats. Both aspects were absolutely indigestible to the “grand old party,” particularly at a time when Crown Prince Rahul Gandhi, was looking for an opportune moment to take over the party.

Initially, the Congress waited to see how the government was performing. What it saw was not to its liking as the Central government was walking away with the applause. The NDA government first formed a committee to trace out the estimated Rs 15,00,000 crore of unaccounted money, thought to be stashed away in tax havens abroad. Then it tried to cut the red tape by scrapping the practice of setting up Groups of Ministers (GoMs) and Empowered Groups of Ministers (EGoMs), which perennially debated but was unable to take any major decisions. The previous government had 62 such panels!

The Planning Commission, existing since Jawaharlal Nehru’s time, was done away with. Instead, Modi set up Niti Ayog, to speed up decision-making. Besides, the Prime Minister also initiated several financial inclusive schemes like the Pradhan Mantri Jan Dhan Yojana, aimed at bringing the poorest of poor into the banking stream. He also set up the National Food Grid, aimed at food security across the country.

With such welfare schemes and other positive initiatives, the people began to feel that there was indeed an efficient and result-oriented government at the centre, which seeks to make life comfortable for the common man. But this was discomforting for the Opposition. They realized that the ground was fast slipping from under their feet. If Modi was allowed to continue in the same vein, the Congress knew that it would soon be wiped out totally.

Undeterred, the government went ahead with many welfare schemes and other path-breaking projects including the Swachh Bharat Mission, Digital India, Make in India, and Namami Gange, a five-year project with a Rs 20,000 crore budget. At the same time, the country was making rapid strides in fast-tracking infrastructure development, including new roads and bridges, bullet trains, telecommunication, and railways.

The Union government also set into motion such other schemes as crop insurance, Atal Pension Yojana for the benefit of people in the unorganized sector, inexpensive health insurance, and making available generic medicines at affordable prices under the Jan Aushadhi Yojana. In addition, Modi also introduced several other schemes to help the girl child, pregnant women and others.

Simultaneously, Modi was making friends abroad, thus raising the profile of the country internationally. However commendable and necessary this might be, the Opposition parties in India, opportunistic as they are, have been giving a torrid time to the ruling NDA.

However, that is to be expected. As the great scientist Albert Einstein once said, “Great spirits have always encountered opposition from mediocre minds. The mediocre mind is incapable of understanding the man who refuses to bow blindly to conventional prejudices and chooses instead to express his opinions courageously and honestly.”

The desirability apart, the fact of the matter is that the current Opposition parties and their leadership in India are devoid of any concrete plan or strategy. They are below mediocre. Hence they keep throwing tantrums at all times because they fear that they may otherwise become irrelevant. And unfortunately, they are not capable of doing anything better!

Even though the quality of the Opposition is abysmal, the government cannot ignore them. It has to deal with them and do it diplomatically and effectively. In life, you can probably choose your friends, but there is no choice when it comes to choosing your enemies.

Luckily for the ruling front, India’s Opposition is made of countless parties with diverse constituencies. It is very important to note that barring the Congress most others are just state or regional parties ruling in one state or another. They have their own constraints, concerns, and requirements. The BJP could address their concerns and try to meet their needs and thereby befriend them.

It helps those parties to have a friendly government at the Centre. The NDA government could reach out to the state government, one by one. If a state party declines the overtures by the Centre and thus deprives the people of that state from getting a major project or some other bounty because of its hostile attitude, this fact can be exposed and highlighted.

If the state parties yield to the overtures, it will split the Opposition rank. Also, the NDA can score brownie points with the state’s voters by favouring that state in certain areas. This tactic if tried in one state after the other will enable the BJP-led NDA government to wean away the AIADMK in Tamil Nadu, the BJD in Orissa, the CPM in Kerala, etc from the Opposition ranks. If the parties spurn the Centre’s proposals, then the NDA may not only expose the anti-people stance of the state’s ruling party but win over the public too by directly communicating with them.

For the state satraps, it may become a catch-22 situation. If they accept the hand of friendship and get projects, it will drive a wedge in the Opposition alliance. If they decline, the public will turn against the state ruling party. This is something the latter cannot allow to happen under any circumstances.

Important to Communicate Directly with Citizens

Direct communication with the people is very critical. Over and above the central council of ministers, each Member of Parliament (MP) of NDA must be asked to communicate directly and regularly with the population in their respective constituencies. While highlighting the actual policies of the Modi government, they should steer clear of all the controversial issues. For this, the government should disassociate itself from the extreme right wing votaries and fringe elements.

Democracy and freedom of speech are deeply ingrained in the Indian psyche. Over the past decades, the Congress and the left-leaning academics and historians, have perpetrated a particular mental conditioning, and a weird view of secularism. According to this view, it is progressive and acceptable to promote minority politics and identify with them. But, when someone talks about Hinduism, he is promptly stamped as a communalist.

Since this has got deeply embedded in the Indian psyche, it will take a few years of gradual and progressive education to cleanse the minds of the citizens. Any attempt to bring in sudden changes may prove futile or even lead to a negative backlash.

The NDA could also identify friendly journalists and publications of repute and communicate with them directly. Rather than confrontation, a conciliatory and placating approach and attitude would help in the current situation.

The most important way to deal with the cantankerous Opposition is to win over the voters. How does the Union government do this? It is simple. The government should come out with people-friendly measures and rein in prices of commodities and services. Any tough decisions, which could hurt the people, must be convincingly explained to the public.

For instance, demonetization was absolutely necessary to fight the menace of black money, corruption, and counterfeit currency notes; and the subsequent inconveniences were probably inevitable. In such situations, the Union government should reach out to the public and show empathy with them. The public will understand and respond positively. And when the citizens are on your side, the Opposition will have no other option but to fall in line.

How Government Should Tackle its Opponents

90 thoughts on “How Government Should Tackle Its Opponents?”